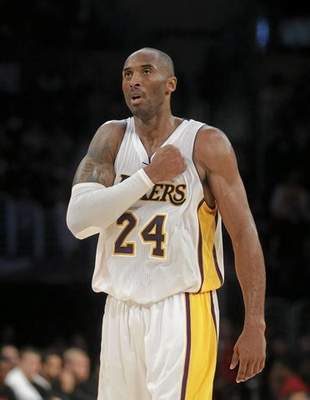 At a time when the Lakers needed anything to stop the dive toward mediocrity, they relied on a trusty source who compiled a track record in bailing them out in tough situations.

The man’s name is Kobe Bryant. You may have heard of him. He has won five NBA championships, climbed to fourth place on the league’s all-time scoring and sank too many game winning-shots to count. But the Lakers’ 129-122 overtime victory on Sunday over the Toronto Raptors at Staples Center went beyond Bryant providing his distinguishable scoring touch. He collected his 20th career triple double by posting 31 points on 11-of-24 shooting, 11 rebounds and 12 assists by basically doing everything.

Incidentally, this coincided with Bryant becoming the first NBA player both to post 30,000 career points and 6,000 assists.

Plenty instead have griped this season about Bryant’s shot selection. After all, he has led the league with 26.4 points per game albeit on only 38.8 percent shooting. Bryant’s deliberate approach toward increasing his around-the-clock treatment and strict diet juxtaposes when he scored a career-high 81 points eight years ago against Toronto after consuming pepperoni pizza and grape soda.

But Bryant turned back the clock by playing his most efficient game all season.

“He’s just an amazing basketball player. That’s the bottom line. He’s had an unbelievable career. He’s still going pretty strong,” Lakers coach Byron Scott said. “There’s a lot left in that tank, it’s obvious. His accomplishments are just fantastic. To watch him continue to compete the way that he does at this level is remarkable.”

An ordinary weekend practice soon morphed into a venting session for Lakers coach Byron Scott. He reported blistering his players for yet another double-digit loss. Scott questioned their commitment level. And he boasted that he did not invite any player feedback.

It appeared it would become a matter of if and not when he would shuffle the Lakers’ struggling roster. “I’m pretty sure I will,” Scott said on Sunday morning, a day after giving the blistering speech to his team. “Eventually, yes I will.”

But the Lakers validated Scott’s decision to hold off on making any immediate changes. The Lakers’ 129-122 overtime victory on Sunday over the Toronto Raptors at Staples Center featured everything that had lacked during their previous four-game losing streak.

The Lakers’ offense finally stayed consistently balanced and efficient for the entire game. Bryant’s 20th career triple-double of 31 points on 11-of-24 shooting, 12 assists and 10 rebounds also coinciding with becoming the first player in NBA history to record both 30,000 career points and 6,000 assists.

The Lakers (4-13) still might not have enough to put on a defensive clinic, allowing Toronto’s Kyle Lowry (27 points), Terrence Ross (20 points), Greivis Vasquez (19 points), Lou Williams (19 points) and Patrick Patterson (10 points) to force 14 ties and 10 lead changes. But the Lakers (4-13) won against the Raptors (13-4) for reasons beyond former USC standout DeMar DeRozan serving an indefinite absence because of a torn tendon in his groin.
Advertisement

“The credit goes to them. They shot the ball with confidence,” Bryant said. “They make shots. When they do that, it becomes difficult to guard. It enables me to pick the opposition apart.”

And it’s something that happened with Scott crediting Bryant for taking a balanced approach both with looking for his shot, playing aggressive and involving his teammates.

“He took some shots but he was looking to get guys shots because of the way they were playing him,” Scott said. “He was aggressive, but aggressive to a point where he wanted to see what the defense was going to do and he reacted. He reacted to it, and made some great passes.”

That all came full circle in the fourth quarter.

Of course, Bryant tried closing the game out by converting on two consecutive turnaround jumpshots and a fast-break layup that gave the Lakers a 105-103 lead with 1:43 left. But Bryant also set up Young for a 24-foot 3-pointer that extended the cushion to 108-104 with 1:31 left.

“I think he has some potential. On my 20th year, I’ll probably have 46,000 points or something like that,” Young joked. “What I need him to do is keep looking for me. He needs to pass me the ball. Ya’ll make sure to tell kobe to pass me the ball or else there will be problems.”

The only real problems involved Bryant’s 9-of-13 mark from the foul line, which included splitting a pair of foul shots that ensured a 109-109 tie with 34.9 seconds left.

“It’s all legs. I have to adjust and figure out how to adjust,” the 36-year-old Bryant said. “It’s different when you’re playing in the game, you have a lot of energy and momentum in your shot. The free-throw line is a static situation and you feel it.”

Bryant was less forthcoming on the officials failing to call a foul on Toronto center Jonas Valanciunas when he drove into the lane to close out the fourth quarter. The Lakers’ star did his best to avoid drawing an NBA-imposed fine for criticizing referees.

“I thought I got hammered pretty hard. Maybe I’m wrong. Who knows,” Bryant said. “But at that point you have to move beyond that and use that frustration for something positive.”

“I want to stay mad. It helps me play better,” Bryant said. “”You know the saying, happy wife, happy life? The same thing goes around here. If I’m upset, everybody’s going to have a bad day.”

But in this case, everybody had a good day. That’s because Bryant provided plenty of assists in more ways than one.