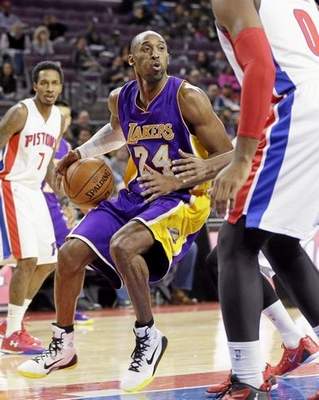 His love for the Lakers’ franchise after winning three NBA championships during the Show Time Era. His optimism that the Lakers will rebuild quickly. And his joy in coaching Kobe Bryant after once serving as his rookie mentor 18 years ago.

Part of Scott’s optimism about the Lakers’ future stems from Bryant posting a league-leading 25.8 points per game after appearing in only six contests last season with injuries to his left Achilles and left knee. Scott also believes he can convince Bryant to play beyond his contract that expires following the 2015-16 season.

“We’ll talk about that. You guys have watched him play. He has a lot left in that tank,” Scott said before the Lakers (4-13) play the Washington Wizards (11-5) at Verizon Center. “If we put something together that excites him, we’ll have a real good chance of him saying he’ll play another year and give it another shot. That’s what we plan to do.”

Bryant has experienced some issues. He has shot a career-low 39.1 percent. Bryant has recently experienced fatigue stemmed from both Father Time and averaging 35.8 minutes.

But the Lakers have issues that go beyond if Bryant can stay healthy or if Scott can stay disciplined with his playing time. The other uncertainty involves the Lakers’ future.

The Lakers struck out this past offseason pursuing LeBron James and Carmelo Anthony. The Lakers also lost Pau Gasol. The Lakers’ Plan B involved retaining Nick Young (four years, $21 million) and Jordan Hill (two years, $18 million), while acquiring Jeremy Lin through a trade and Carlos Boozer through the amnesty wire.

But Scott said the Lakers can “absolutely” still attract free agents for reasons beyond their 16 NBA championships. Scott said he has “tremendous confidence” in Lakers general manager Mitch Kupchak and executive Jim Buss after having extensive talks during three formal interviews this offseason for the vacant coaching position.

“I truly believe that,” Scott said. “We may be a little down this year. Next year will be better and next year will be back where we belong. It’s a process. We all have to bite the bullet a little bit and take it. But we do see the light at the end of the tunnel.”

How did the Lakers outline their vision to Scott? He smiled at the question, perhaps aware he cannot talk about future free agents publicly because the NBA considers that tampering.

“They just had a clean insight into what the wanted to do and asked me my take on a lot of the things they were talking about and I liked what I was listening to,” Scott said. “I said if this happens at that time, I was early in the process, I’m 110 percent on board. That question was ‘For any coach we hire, it’s going to be rough the first year or two. Are you able to deal with that?’ I said, ‘Of course I am.’ I’ve dealt with it before. It’s a little bit harder because my expectations with this organization is a lot like everybody else’s.

That has left Scott experiencing plenty of sleepless nights after debilitating losses. The Lakers rank last in total defense. They have also become overwhelmed with season-ending injuries to veteran guard Steve Nash (back), rookie forward Julius Randle (back) and Xavier Henry (left Achilles).

“I’m holding up. Every now and then, I wouldn’t say I lose it, but I let them know how I feel,” said Scott, who has occasionally questioned his team’s effort after losses. “I’m not used to losing. I don’t think anybody in that room wants to get used to it. If you get used to it, it’s time for you to move on to another team. We all know it’s going to be a tough year and hard year. But we can still be competitive and we can still win basketball games. That’s still our goal.”

That reality often leaves Scott and Bryant texting each other late into at night. But Scott said he will not bring up with Bryant anytime soon about prolonging his career.