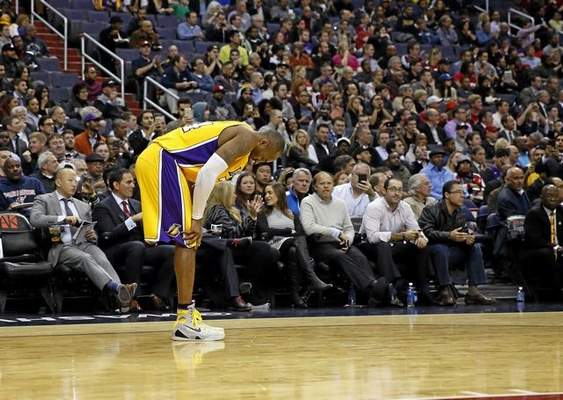 WASHINGTON D.C. — His thirst for competition still seems unquenchable. His willingness to put in the work appears unmatched. His public support over the Lakers’ front office has not waned despite the frequently debilitating losses.

Yet, Kobe Bryant hardly sounded uncertain if that will entice him enough to prolong his career with the Lakers beyond his two-year, $48.5 contract that expires following the 2015-16 season.

“Maybe. Maybe not. I don’t want to be coy about it,” Bryant said following the Lakers’ 111-95 loss on Wednesday to the Washington Wizards at Verizon Center. “I don’t know what to tell you. Right now I’d say no. But it doesn’t matter. Would that change a year from now or something like that?”

After all, Bryant suggested two years ago that he would retire following the 2013-14 season when his previous contract expired. But his sentiments soon changed after tearing his left Achilles tendon on April, 2013, the Lakers’ star since admitting that he wanted to extend his career to prove he could come back and still play at an elite level.

Lakers coach Byron Scott held out optimism Bryant may change his mind again. He has averaged a league-leading 26 points per game albeit on a career-low 39 percent clip after playing in only six games last year because of injuries to his left Achilles tendon and left knee. Scott also predicted the Lakers’ front office will make enough roster acquisitions that Bryant would feel inclined to prolong would already be a 20-year career in hopes of winning more NBA championships.

But Bryant stressed that his thought process will strictly entail how his body feels and the maintenance work required to ensure a productive season.

“If I want to play, I’ll play. I tend to make my own decisions. If I don’t want to play, I won’t play,” Bryant said. “It’s just a feeling on if I want to go through the process of being ready every single day and the amount of commitment that it takes. Its nuts. If I want to continue to do that, I will. If I don’t, I don’t.”

Bryant, Lakers fade down the stretch in loss to Washington Wizards