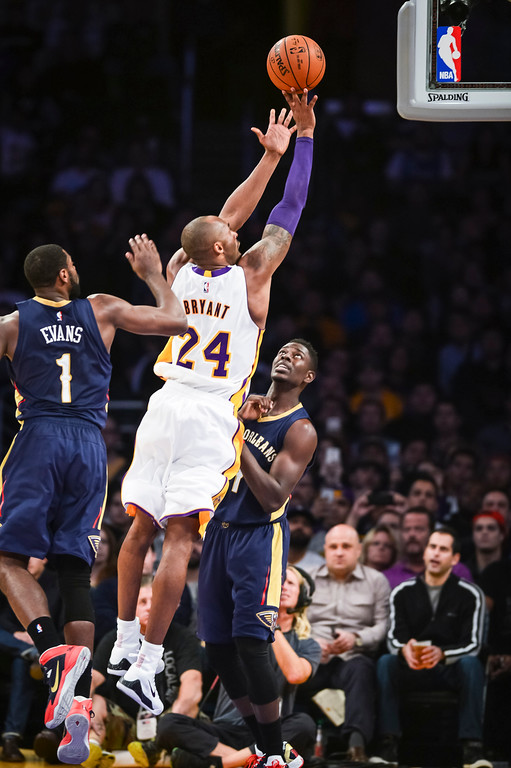 The Lakers have suffered losses at a franchise record pace. Their defense has become a non-threatening punching bag that enable both stars and no-name players alike to post career numbers. And the Lakers have failed to offer any consistent signal on when it will all stop.

Yet, one variable has still ensured the Lakers attracting strong interest from fans and media alike. The reason, of course, involves Kobe Bryant, who has posted a league-leading 25.2 points after appearing in only six games last season because of injuries to his left Achilles tendon and left knee. Within that storyline emerges another interesting subplot. Bryant enters the Lakers’ (5-16) game on Tuesday against the Sacramento Kings (10-10) at Staples Center only 62 points away from surpassing Michael Jordan for third place on the NBA’s all-time scoring list.

“I think these milestones are mainly a distraction,” former Lakers legend Kareem Abdul-Jabbar said on NBA TV’s “The Beat.” “The important thing for Kobe Bryant are the World Championships and MVPs. He’s done all of those things. He’s already achieved the things that count and that people judge you by. I don’t think he needs to be that emotional.”

Bryant has actually maintained public stoicism about his career 32,230 points nearly surpassing Jordan’s 32,292 points despite listing him as one of significant idols growing up. But Abdul-Jabbar’s perspective comes from experience.

He has remained the NBA’s all-time leading scorer with 38,387 points, while Karl Malone has trailed second with 36,928 points. Abdul-Jabbar lasted 20 NBA seasons for reasons involving his patented sky hook, footwork and dieting. He also played 30 minutes per game in his last seasons. Abdul-Jabbar’s contributions in the 1987-88 season (14.6 points, 6.0 rebounds) and 1988-89 season (10.1 points, 4.5 rebounds) marked a steep drop from his career averages of 24.6 points and 11.2 rebounds.

“To be at your best, you have to be in superlative form, both mentally and physically, and bring it every night,” Abdul-Jabbar said. “Once those things don’t start arriving on time or you can’t predict it, it gets to be a problem. For me, I started to realize I wasn’t living up to the standard I had set for myself over my entire career. I felt I retired at the right time.”

Bryant remains under contract through the 2015-16 season, though Lakers coach Byron Scott recently said publicly that he hopes Bryant extends his career for at least another year. Regardless, it appears unlikely Bryant could surpass Abdul-Jabbar given the vast point differential.

“The whole idea of being as good as you can be is something that drives someone like Kobe Bryant. He wants to show his skills were consummate and long lasting. I think he’s already proven that,” Abdul-Jabbar said. “I think it’s great that Kobe has done what he has done. He started playing at such an early age, and to be as proficient as he was right from the start. When most other guys would have been in college, Kobe was dominating in the professional ranks. He’s a unique athlete, and he has made quite an impact on the record books and people’s idea of perfection.”