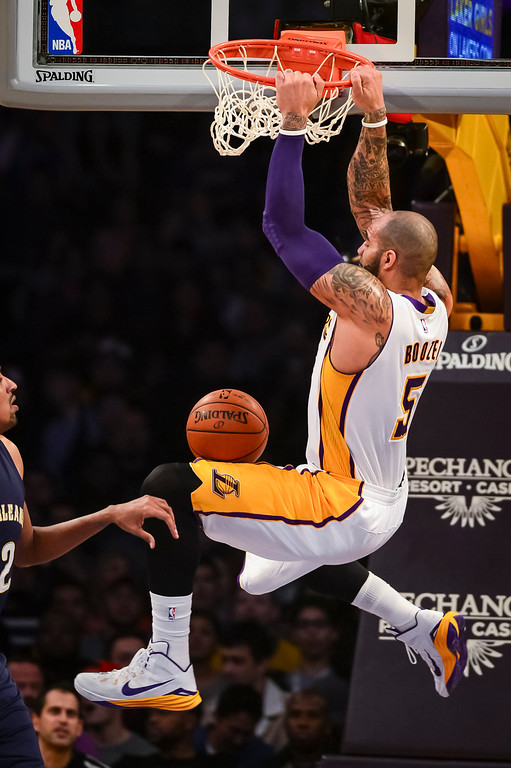 Carlos Boozer eventually emerged out of the trainer’s room, the hour-long wait after Monday’s practice delaying the inevitable answer on what he thought of his recent benching.

Clearly, Boozer does not support Lakers coach Byron Scott recently taking away his starting position. Scott shared after the Lakers’ 104-87 loss on Sunday to the New Orleans Pelicans that Boozer felt unhappy about his demotion. Boozer left the locker room afterwards without speaking to reporters. Boozer later admitted to L.A. Newspaper Group, “I don’t know if it’s the answer.”

But Scott has believed Boozer hasn’t performed his job. Though Boozer has averaged 12.8 points on 49.8 percent shooting, Scott has constantly criticized Boozer’s defensive execution. Scott also expressed uncertainty on whether Boozer, a two-time NBA All-Star, could ever have another All-Star caliber season.

“That’s a good question,” Scott said. “I don’t know. On the defensive end, he has to do a much better job of doing the coverages that we talked about doing.”

“That’s just his opinion,” Boozer said. “I have a different opinion. I’ll keep it to myself.”

It seems unlikely that Boozer and Scott will hash out their different perspectives.

Scott told reporters about starting Ed Davis over Boozer after morning shootaround without informing him first. That’s because he missed morning shootaround to visit doctors, receive treatment and rest from an upper respiratory infection. Boozer then found out about four hours before the Lakers played New Orleans on Sunday and found little interest in hearing an explanation. Boozer talked with Lakers general manager Mitch Kupchak following Monday’s practice, but he also declined to share what their conversation entailed.

Scott insisted that the demotion is “nothing personal.”

“I don’t massage egos,” said Scott, who also started Ronnie Price over Jeremy Lin. “I don’t have to go to players and talk to them. At least I don’t make a point to. Jeremy came to me and talked to me about it. I told him what I thought. I thought he handled it extremely well. We went from there.”

Has Boozer handled his demotion well?

“So far,” Scott said. “If he would’ve been happy about it, then I knew something is different about him. The fact he wasn’t happy told me it was something he didn’t like. He wants to be out there playing. But to me, you have to go out there and prove that on the floor in practice and in games.”

Boozer still posted 12 points on 6-of-12 shooting and six rebounds in 23 minutes. But Scott has lamented that Boozer and others have struggled on defense despite simplifying his schemes about three weeks ago.

Scott has often attributed that either to “effort” or “lack of focus.” It appears Boozer attributes the defensive issues to something else, though he wouldn’t say what.

“I think we all play hard,” Boozer said. “We have to figure out some things. But hopefully it’ll help us win.”