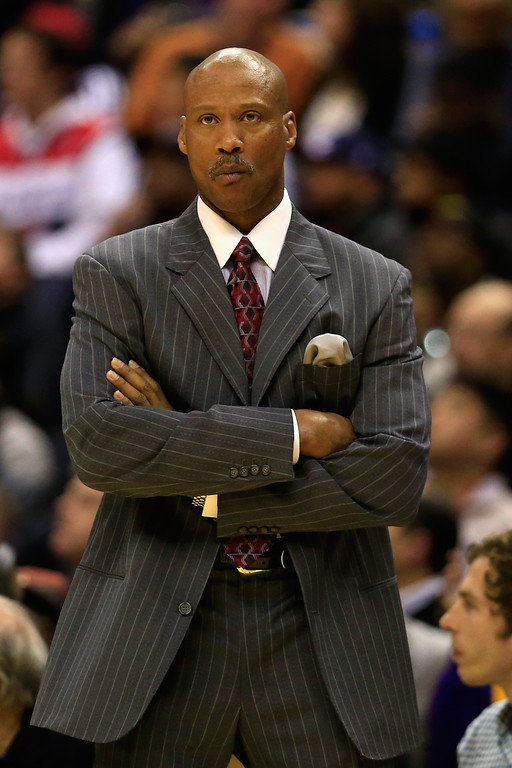 Head coach Byron Scott of the Los Angeles Lakers looks on from the bench during the first half against the Washington Wizards at Verizon Center on December 3, 2014 in Washington, DC. (Photo by Rob Carr/Getty Images)

The moment has happened to every Lakers’ head coach, and it only took 21 games for Byron Scott to experience it.

How to respond to something Magic Johnson argued that may put the coach in a precarious position.

Johnson said at a promotional event on Tuesday in New York City that he hopes the Lakers “lose every game” so it helps their chances in landing a top lottery pick. His boisterous laugh foreshadowed what Scott said he plans to text Johnson in response.

“LOL,” said Scott, though he then turned serious.

“That’s easy to say, but when you’re behind the scenes and you’re in the trenches and you’re coaching, that’s not something you wan to do,” Scott said. “I don’t think our players look at it that way. We have to try to go out here and win every game possible. If you lose games it’s one thing. But to go out and try to lose, that’s a different story. That sends a message to those guys in there that it goes back to a losing mentality. We don’t want to create that here.”

The Lakers ((5-16) enter Tuesday’s game against the Sacramento Kings (11-10) at Staples Center with the second-worst record in the Western Conference. It seems all but certain the Lakers will miss the playoffs for a second consecutive season. But their draft prospects remain dicey.

The Lakers owe their first-round draft pick to Phoenix as part of the Steve Nash trade two years ago unless the lands in the top five. The Lakers also acquired a first-round pick from Houston as part of the Jeremy Lin trade, but the Rockets (16-4) rank second in the Western Conference. The Lakers have favorable odds to land the sixth pick (34.2 percent) or fifth pick (23.8 percent) than it would be to land first (10.3 percent), second (11.1 percent) or third (12 percent).

“We never went in trying to lose games. We never had a conscious effort of doing that,” Scott said. “We still tried to win games as much as possible. I just think karma is a you know what. If you don’t try to win games, you don’t get the first pick. If you go out and play hard, hopefully you get rewarded in the right way and get the type of player you want in the next year of the draft and free agent wise. That’s the last thing on my mind, losing games right now, at least on purpose.”

Johnson has hardly become shy about expressing criticism about the Lakers.

Just before the Lakers fell in a four-game sweep to the Dallas Mavericks in the 2011 Western Conference semifinals, Johnson argued former owner Jerry Buss should “blow this team up.” Johnson predicted that former coach Mike Brown would be fired if the Lakers failed to advance out of the first round of the 2012 NBA playoffs. Johnson both praised the Lakers for his eventual firing five games into the 2012-13 season and criticized the Lakers for hiring Mike D’Antoni over Phil Jackson. Johnson consistently criticized D’Antoni for the team’s poor defense and persistent losing in his two seasons here.

Scott seems unlikely to have such concerns with Johnson, who was his teammate with the Showtime Lakers and has largely supported him. But he sounded unwilling to talk about rebuilding only one month into the season.

Still, Scott said the Lakers’ rebuilding “starts off with me.”

“The way I approach practice every day and games every day with a workmanlike mentality and positive attitude we have to have,” Scott said. “After that, you have to find the guys that fit that mold and then get rid of the ones that don’t.”

“There’s 30 teams in this league, and you’re on one of them,” Scott said. “There’s 29 other teams that are looking at you as well. You still have to go out there and try to produce if you want to play in this league. You’re always playing for somebody be it here in Los Angeles or somewhere else. If you still want to be in this league, that’s how you have to approach it. There’s still a job that you go out and play the best you can for that year and then you do whatever happens that summer.”

Soon enough, Scott’s press conference ended. He walked away from the scrum of reporters and headed toward his office.

Magic Johnson says he hopes the Lakers “lose every game”