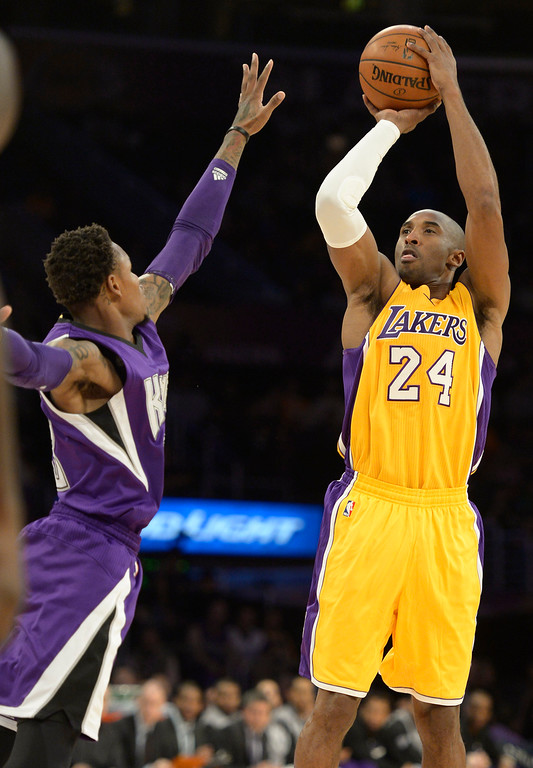 The smirk widened on Kobe Bryant’s face as he learned the news.

Magic Johnson argued on Tuesday in New York City to reporters that he hopes the Lakers lose every single game to maximize their chances at a top pick in the 2015 NBA Draft. Perhaps puzzling for Johnson to say such a thing after helping the Lakers to five NBA championships through his sheer talent and strong supporting cast.

“Magic’s one of the most competitive players in time,” Bryant said following the Lakers’ 98-95 win on Tuesday over the Sacramento Kings at Staples Center. “From an owners’ perspective, his opinion is to get top picks and be able to use those as leverage to trade and field a competitive team.”

The Lakers (6-16) will have a hard time making that happen even if they remain at the bottom of the Western Conference standings. Barring finishing out in the top five, the Lakers will have to trade their first-round pick to the Phoenix Suns as part of the Steve Nash trade two years ago. Despite finishing with a 27-55 record last season, the Lakers landed the seventh overall pick and drafted Kentucky forward Julius Randle. He suffered a season-ending right leg injury in the Lakers’ season opener, and was seen at Staples Center on Tuesday walking around on one crutch.

Laker Nation: Today in NY, I said I hope the Lakers don't win too many games because I want them to have the 1st or 2nd pick in the draft.

Last years draft there were no superstars. This year there are about 3-4 superstars in college basketball and we need one of them!

Laker Nation: I don't want the team to finish in the middle of the pack and get a 10th-14th pick because that won't do us any good.

This begs the question. Shouldn’t Johnson’s logic prompt the NBA to fix their lottery system so that it does not reward bad teams for losing?

Johnson’s latest comments should hardly be surprising. He has cemented a reputation for becoming outspoken for the Lakers. Although he remains an unpaid vice president of the team, the Lakers have often distanced themselves from Johnson’s critiques.

Just before the Lakers fell in a four-game sweep to the Dallas Mavericks in the 2011 Western Conference semifinals, Johnson argued former owner Jerry Buss should “blow this team up.” Johnson predicted that former coach Mike Brown would be fired if the Lakers failed to advance out of the first round of the 2012 NBA playoffs. Johnson both praised the Lakers for his eventual firing five games into the 2012-13 season and criticized the Lakers for hiring Mike D’Antoni over Phil Jackson. Johnson consistently criticized D’Antoni for the team’s poor defense and persistent losing in his two seasons here.

The Lakers have hardly fared much better than Scott, but he is Johnson’s former teammate during the Showtime Era. Johnson also attended Scott’s introductory press conference in late July to show support.

“I’m going to have to tell Magic to stay at Dodger Stadium for a while,” said Lakers forward Nick Young, referring to Johnson being part of the Dodgers’ ownership group. “He don’t need to bring that smile around here. I’ll do all the smiling.”

“I’ll tell Magic he got to stick with us,” Young said. “But Magic always has some bold comments. I remember last year he said some crazy stuff too. Just tell him to chill out for a minute or else I’ll have to knock him out one or two times.”

The Lakers already delivered one counter. They won against the Kings, much to Johnson’s dismay.