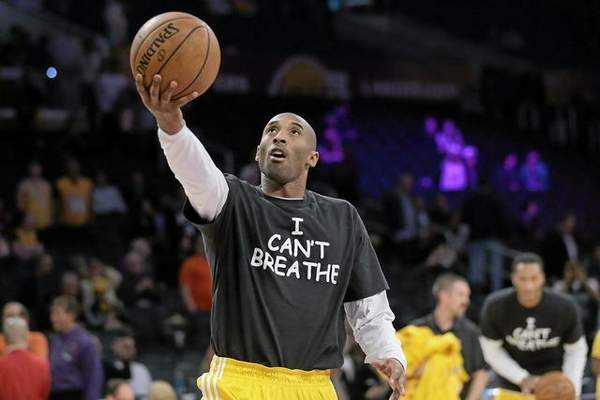 Los Angeles Lakers’ Kobe Bryant warms up before an NBA basketball game against the Sacramento Kings, Tuesday, Dec. 9, 2014, in Los Angeles. Several athletes have worn “I Can’t Breathe” shirts during warm ups in support of the family of Eric Garner, who died July 17 after a police officer placed him in a chokehold when he was being arrested for selling loose, untaxed cigarettes. (AP Photo/Jae C. Hong)

The Lakers came out and made a statement. It went beyond ending with a 98-95 victory on Tuesday over the Sacramento Kings at Staples Center instead of a loss to improve their draft lottery chances as Magic Johnson hoped.

The Lakers also wore “I Can’t Breathe” T-Shirts both during pre-game warmups and when players sat on the bench. The message is in support of Eric Garner, a young African American who died in July after a police officer choked him. Though the incident was captured and shown on video, a grand jury decided last week not to indict the police officer.

“I didn’t have to study or research too much after looking at the video,” Lakers guard Kobe Bryant said. “It’s pretty self explanatory.”

So, Bryant spearheaded the idea for he and his teammates to wear the shirts. In recent days, Chicago’s Derrick Rose and Cleveland’s LeBron James have worn the shirts, too. Bryant has also expressed outrage over other issues. A grand jury recently declined to indict white police officer Darren Wilson for his role in the death of unarmed black 18-year-old Michael Brown three months ago in Ferguson, MO. Bryant also spoke at a rally run by the Trayvon Martin Foundation at Crenshaw High School in July 2014 to mark the one-year anniversary of neighborhood watch volunteer George Zimmerman’s not guilty verdict in the shooting death of Martin, 17.

Although black players represent a large portion of the NBA, Bryant argued “it would be a serious disservice to limit this to a race issue.” Bryant argued “it’s a justice issue” and “a global thing.”

“People are really questioning the justice system and questioning the process of the legal system and whether or not they are abusing authority and what’s the threshold so on and so forth,” Bryant said. “That’s what our nation is found out. We have an ability to have a voice and platform to speak up and effect change.”

NBA Commissioner Adam Silver has supported the players’ efforts, but has said he wants players to follow on-court attire rules. That entails wearing Adidas attire, the league’s official sponsor, but it does not appear the league will fine any players for wearing the shirts.

Lakers coach Byron Scott said he was not aware of the team’s plan to wear the T-Shirts until during pre-game media availability, which takes place around 90 minutes before tipoff.

“Freedom of choice and freedom of speech,” Scott said. “That’s their choice. Whatever they choose from my standpoint as a coach, I’m going to support them. That’s a choice.”

And it’s a choice Bryant believes will help solve this issue.

“It’s us supporting that movement and supporting each other as well as athletes,” Bryant said. “The beauty of our country lies in its democracy. If we ever lose the courage to speak up in things that we believe in, we really lose the value that our country stands for. It’s important that we have our opinions and it’s important we stand up for who we believe in. We all don’t have to agree with it. That’s completely fine. That’s what makes us a beautiful country.”