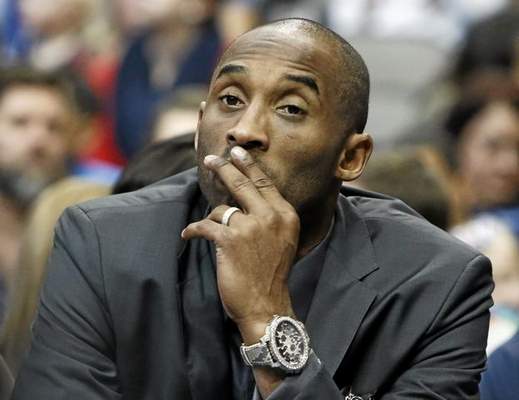 Los Angeles Lakers guard Kobe Bryant looks on from the bench in the first half of an NBA basketball game against the Dallas Mavericks, Friday, December 26, 2014 in Dallas, Texas. Bryant was sitting out his third straight game to rest his sore body but could be back in the lineup when the Lakers return home for their next outing. (AP Photo/Brandon Wade)

After missing the past three games to rest his 36-year-old body, Kobe Bryant will suit up when the Lakers (9-21) host the Phoenix Suns (17-14) at Staples Center.

“He says he feels a whole lot better,” Lakers coach Byron Scott said of Bryant after missing games against Golden State and the team’s recent two-game trip in Chicago and Dallas. The Lakers went 1-2 during Bryant’s absence. Bryant’s play against Phoenix will mark his first game since playing in last Sunday’s loss against Sacramento where he posted 25 points on 8-30 shooting and nine turnovers

Scott plans to play Bryant between 32-33 minutes, though he would like his playing time under 30 if the team either faces a wide-margin of victory or defeat. Although Bryant will start at his customary shooting guard spot, Scott also said that Bryant’s responsibilities moving forward could entail splitting time at point guard, shooting guard and small forward depending on game flow and matchups.

Scott listed Wayne Ellington and Nick Young as possibilities to play at shooting guard when Bryant mans that small forward position. Scott also offered some self-deprecation when a reporter suggested he should suit up at shooting guard considering he shot 48.2 percent from the field in his 14-year NBA career

“Only problem is he has a suit on,” Scott said, laughing. “He would love to go out there and play with Kobe. Then there’s 4 on 5 going down on the other end. That’s not good. Defensively right now you think we’d be better with four of us down there instead of five?”

Safe to say that won’t happen.

But Scott said he and Bryant have yet to determine other things regarding his role. Although Bryant took part in some light shooting drills on Saturday, it is not clear if he will sit out practices entirely. Scott has also not decided whether Bryant will play in back-to-back games, the Lakers’ next sat happening next Sunday against Indiana before playing in Portland on Monday.

“We haven’t gotten that far as far as that scenario is concerned,” Scott said. “We’ll tackle that once we get to it and if we get to it this year. Right now it’s about managing the minutes.”

Bryant has averaged 24.6 points per game (third overall in the NBA) albeit on a career-low 37.2 percent shooting. In the last five games he played, Bryant’s production dipped to 20.6 points per game on 29.2 percent shooting. He had also shot 11 of 45 in the past two contests, an abysmal 24.4 percent. Bryant then reported soreness in his knees, legs, Achilles, metatarsals and back tightness.

So with a whole week to rest those body parts, how much will that make a difference in Bryant’s play?

“I would think you would see it in pretty much everything,” Scott said. “Once you get fatigued, your body and everything just goes. Once you rest it, you feel rejuvenated. I would hope that we see him [improve] in every aspect of the game.”