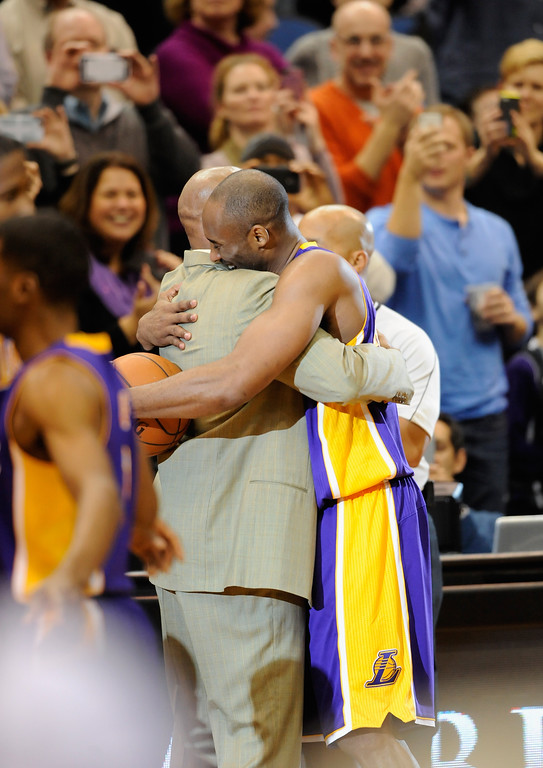 “MINNEAPOLIS, MN – DECEMBER 14: Kobe Bryant #24 of the Los Angeles Lakers hugs head coach Byron Scott after passing Michael Jordan on the all-time scoring list with a free throw in the second quarter of the game on December 14, 2014 at Target Center in Minneapolis, Minnesota. NOTE TO USER: User expressly acknowledges and agrees that, by downloading and or using this Photograph, user is consenting to the terms and conditions of the Getty Images License Agreement. (Photo by Hannah Foslien/Getty Images)”

So many questions remain on how Father Time and Mother Nature might respond in Kobe Bryant’s quest to win a few battles against those elements.

But Lakers coach Byron Scott has outlined a tentative plan in hopes both to preserve the 36-year-old Bryant and maximize his presence. Bryant sat out of Monday’s practice after posting 10 points on 4-of-10 shooting, seven assists and five turnovers in 32 minutes of the Lakers’ loss on Sunday to Phoenix, a game in which Scott reported Bryant saying he “felt fresh.” Scott said Bryant will sit out of practices when there is only one day between games. The Lakers (9-21) play on Tuesday in Denver (13-18), a game Bryant plans to play.

“It seemed to work for him well the other day,” Scott said. “We’ll continue to work him back.”

The Lakers then play on Friday against the Memphis Grizzlies at Staples Center. Because the Lakers have three days between games, Scott plans to give Bryant off on Wednesday and then allow Bryan to complete what he called “light work” on Thursday.

“Just shooting,” Scott said. “Just a good sweat. He can get that with all his shooting and movements.”

Scott hasn’t yet decided how he will handle Bryant on back-to-back games. Or how much Bryant’s playing time will increase during possible overtime games. But Scott plans to keep Bryant between 32 to 33 minutes after earlier playing him between 30 and 40 minutes. Bryant has averaged 24.1 points on a career-low 37.2 percent shooting in 35.4 minutes per game.

How challenging has this become Scott to resist urges to play Bryant longer?

“There’s so much temptation,” Scott said. “He’s one of the best in the world. I’m looking at that clock and at him and at that clock and want to put him back in. But I have to stick to the plan because I want what’s best for him.”

Will Lakers maintain offensive balance as shown in Phoenix loss?