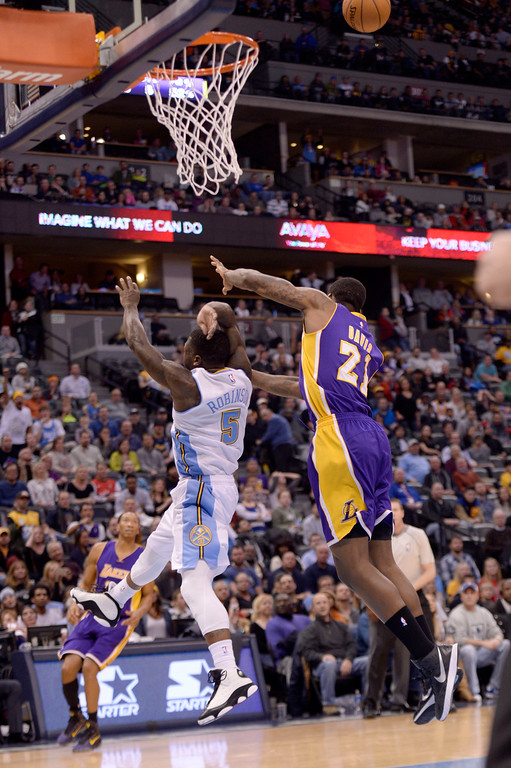 “DENVER, CO – DECEMBER 30: Nate Robinson (5) of the Denver Nuggets fouls Ed Davis (21) of the Los Angeles Lakers on a play that would lead to Robinson’s second technical and eventual ejection during the second half of the Lakers’ 111-103 win. The Denver Nuggets hosted the Los Angeles Lakers at the Pepsi Center on Monday, December 30, 2014. (Photo by AAron Ontiveroz/The Denver Post)”

DENVER — He looked understandably dazed and he sounded tired, Yet, there Lakers forward Ed Davis stood patiently by his locker willing to answer any questions to those who asked about his nose.

“I think it’s broken,” Davis said following the Lakers’ 111-103 victory over the Denver Nuggets on Tuesday at Pepsi Center. “They say it’s broken. I have to get some tests tomorrow. But it’s probably broken.”

Davis suffered the injury after Nuggets guard Nate Robinson delivered a hard foul on Davis with 1:36 that prompted his second technical foul and immediate ejection.