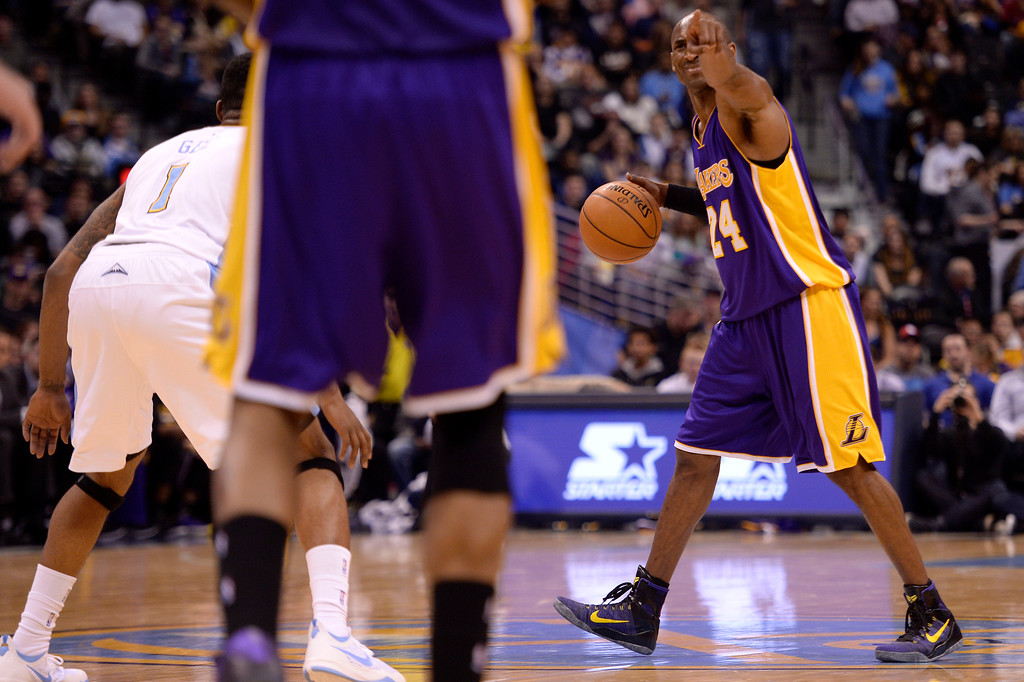 DENVER — His workload dwindled and his free time opened up, giving Kobe Bryant several moments of self reflection on how he will counter punch against Father Time and persistent double teams.

When he sat three games last week, Bryant restored some of the energy that he expended through two months this season that produced 24.1 points albeit on a career-low 37.5 percent shooting. But that time away from the court also prompted Bryant to look at how he can play more efficiently by finding easier sweet spots and elevating his teammates around him.

So in what Bryant likened toward becoming an “old school Oscar Robertson,” the Lakers’ star returned to the court with a less-is-more approach. That meant taking fewer shots and making more passes. That meant offsetting his lost athleticism with a deliberate approach by backing down his opponents in the post instead of exploding to the basket. That meant Bryant offering his second triple double of the season, his 23 points on 6-of-11 shooting, 11 rebounds and 11 assists in 32 minutes fueling the Lakers’ 111-103 victory over the Denver Nuggets on Tuesday at Pepsi Center. Incidentally, the strategy offered Bryant the gas mileage equivalent to a Prius instead of a Hummer.

“I’m making some adjustments and focusing on being a point two. It takes less effort and less energy,” said Bryant as he rested his legs in a bucket of ice by his locker afterwards. “I’m a natural scorer. But that doesn’t mean I can’t evolve.”

Yet, Lakers coach Byron Scott and Bryant stressed that this identity switch reflects more of the circumstances around him than actually changing his scoring mentality.

“He has a great feel for the game and takes what the defense gives him,” Scott said. “Tonight was one of those nights where they tried to get it out of his hands. He did a great job of reading the defense and finding the open guys. I don’t think he’s out there trying to save anything or pacing himself. That’s not his style. He’s taking what defenses give him.”

And so with Denver (13-19) loading up on Bryant nearly every time he touched the ball, the Lakers’ star showed favoritism over pinpoint passes instead of difficult shots. Bryant swung the ball around the perimeter like a hot potato to outside shooters, such as Ronnie Price and Wesley Johnson. Bryant stayed patient in the post before directing a well-placed bounce pass to Jordan Hill and Ed Davis inside or to Carlos Boozer on the block.

The result: The Lakers (10-22) featured Boozer (19 points), Price (18 points), Johnson (16 points) and Hill (12 points) all cracking double digits. The Lakers went 14-of-25 from three-point range (56 percent), a stark increase from the season-average 35.7 percent clip from shots beyond the arc. The Lakers also opened the game making 12 of their first 14 shots.

“I’ve played the point guard role on the team that won the first three championships,” Bryant said. “I’ve been taught very well to do that. It’s not something unfamiliar to me.”

Even with Bryant taking a league-leading 626 field-goal attempts this season, the Lakers’ star has said repeatedly he would love to take a backseat. If only his teammates hit more shots consistently. If only his teammates showed more aggressiveness. If only opponents did not open the gates with double-digit leads that only a scoring binge could overcome.

That explains why Bryant sounded slightly irritated when reporters pressed him on why he did not become a facilitator earlier.

“I don’t know why it’s so hard for you guys to understand that,” Bryant said. “I really don’t. It’s fascinating to me. When they’re open and they make shots, it’s easy. I sit back. When they don’t and we’re down 15 points, I try to get it going. Sometimes I make them. Sometimes I don’t. When I don’t, you think I’m not passing the ball. It’s really that simple. You have a really hard time understanding that for some reason.”

Bryant then turned to the reporter who asked the question.

After all, Bryant still reversed to his scoring mentality when the Lakers needed him.

With the Nuggets cutting a 23-point deficit into a Lakers’ 98-87 lead with 6:56 left in the game, Bryant stepped on the court and made some clutch plays. He sank a 26-foot three-pointer that gave the Lakers a 98-87 cushion with 6:56 left. Bryant then converted on three of four free throw attempts

“Kobe is a scorer and is an aggressive scorer,” Boozer said. “If you play single coverage on him, there’s really nobody that can guard him one-on-one. Let’s be honest. They’re smart. They try to make the rest of us make shots. That’s what we did. That showed we can score and Kobe did a great job of getting us the ball.”

But will that become the norm?

That will hinge on how well the Lakers’ supporting cast maintain the prolific shooting they showed against Denver. Yet, Bryant sounded more open to the scenario for another reason. In a season where Bryant’s heavy workload led to exhaustion, the Lakers’ star sounded eager on dialing it back. After all, Bryant hardly has the same luxury when he pushed the pace when former Lakers coaches Phil Jackson, Mike Brown and Mike D’Antoni all tried to rein in his playing time without much success.

“I was a lot younger then and I could play those minutes,” Bryant said. “I could handle those minutes. Now I can’t. There’s no use in fighting it. You accept it, you play around it and you figure it out.”

Bryant likened that process toward learning a new golf swing, the perfect example on how old habits become hard to break. But it’s one that Bryant said he will follow through with the same determination and focus that enabled him to return from numerous injuries and use his fundamentals to stay among the NBA elite in his 19th season.

“When you’re used to playing a certain way, your body is used to doing certain things, you know mentally what to do but your body is so used to doing it one way and it’s very, very difficult to do,” Bryant said. “But nonetheless, that’s the challenge and I take pride in it.”

So much that Bryant quickly swatted away the chatter that this has become such an exhausting and unenjoyable season that he won’t play in the last year of his contract that expires following the 2015-16 season.

“Is it very difficult right now to play? Yeah,” Bryant said. “Am I looking forward to playing next year? Yes. But if you asked me if I want to play beyond that, right now the answer is no.”

Until that time comes, Bryant remains determined to evolve his game just as he did against Denver. But don’t mistake him for the next Magic Johnson. Bryant will still remain a scorer. He will simply just pass more when it becomes needed.