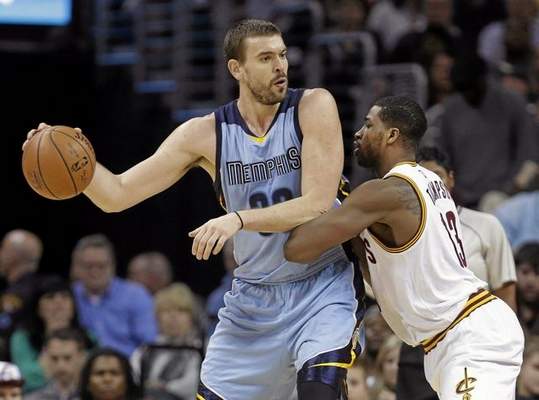 Memphis Grizzlies’ Marc Gasol, left, the 2012-13 Defensive PLayer of the Year and younger brother of former Laker Pau Gasol, is expected to be one of the Lakers’ free agent targets in the offseason. (AP Photo/Mark Duncan)

Below is a Q&A with Memphis Grizzlies center Marc Gasol, who talked with the Los Angeles Newspaper Group about his upcoming free agency, whether he’d consider the Lakers and how he has developed into what many around the NBA consider as the league’s best center. The Lakers (10-22) host the Memphis Grizzlies (23-8) on Friday at Staples Center.

Once you become a free agent this offseason, what variables are you going to weigh?

Gasol: I haven’t weighed anything yet. Knowing that Arn [Tellum] (Gasol’s agent) will handle pretty much the load of everything else, whenever July comes, it’ll come. We’ll sit down and have a human eye-to-eye conversation and we’ll see what we’re looking for and looking at for the next four or five years of my life with the team and different teams and my family. Whatever decision I make, it would be the best.”

Would you consider the Lakers as an option?

Has Pau provided you any perspective considering his time with the Lakers?

Gasol: That was Pau’s time. I won’t say no to anything right now. It’s not something I have in front of me right now. If it’s presented to me, I’ll think about it. If not, I won’t.

How do you look back on being part of the Lakers’ trade that brought Pau here (In Feb. 2008, the Lakers traded Kwame Brown, Aaron McKie, Javaris Crittenton two first-round picks and the rights to Marc Gasol to Memphis for Pau Gasol. The Lakers selected Marc Gasol 48th overall in the 2007 NBA draft. The Lakers would then appear in three consecutive NBA Finals and win two back-to-back championships, though Pau Gasol left this offseason to Chicago after experiencing endless trade rumors, reduced roles and health ailments for the past three seasons).

Gasol: “I never thought I would be in this league. I was happy for Pau because I knew that he needed a new start. I didn’t see myself as an NBA player. I didn’t see myself coming over here [from his native Spain]. I knew the Lakers didn’t know much about me. I never talked to them and they never came over. They gave me a training camp minimum contract. I wasn’t going to leave my team to be a training camp guy, especially not knowing what a training camp guy is. I would have a slim chance of making the team. It happens, but it normally doesn’t happen.

I was just happy for Pau, honestly. I think it worked out pretty well for both sides. The Grizzlies got what they want, which was rebuilding and the cap space at that time and some young players. I don’t think they knew what that could turn into. The Lakers obviously have two rings, which is the ultimate goal and a great, unique and outstanding player in Pau. I don’t think they’ll get another one like that in years to come.”

When you were traded then, did you have any clairvoyance you would become the player you are now?

Gasol: “I don’t think they knew the player I was. Nobody knew. Even today, I don’t think I’m the player I can still be. You never know. You make a decision and you have your side. They got a pretty good result having Pau for 6 ½ years. I don’t think they got the most out of Pau. They used Pau well for the 3 ½ years. But after that, the team didn’t have everything figured out. It was sad to see that. Move on and onto the next goal and next thing.”

So what has gone into your trajectory as a player?

Gasol: “You look at the game that’s in front of you and how teams try to play you and try to practice ways to get out of that. If teams sag on you, you work on your shooting. If teams play close, you work on your driving. If teams double teams you, you try to find ways to get out of what teams do to you. When you’re in the league long enough and you do different things, you’re going to find every single way to get out of every situation. It’s going to be hard to be a perfect player. But you try to be a complete basketball player as you can be. In the end, the game becomes easier.

As a basketball player, you always try to get better and think the game and see what they do and see how you can affect and how you can have a positive impact on your team. First you try to get in the rotation honestly. My goal was in our first training camp was to make the rotation and fight for the spot and earn my teammates respect. To the day, that’s one of the best that’s most important. To have your teammates’ respect, it’s never given. You have to earn your respect and earn your trust. That’s why they trust you now. You have to earn that everyday, especially in this league when it’s an emotional roller coaster when there’s games where you do real well and games you don’t do so well. You earn it everyday. That’s why you use that when you don’t do so well. They still trust you because they know what you stand for and know you have their back.”

It’s everyday. It keeps growing. It starts whenever they see you. You don’t think about it and do it. As long as do it consistently every night and every day in practice and every night in the games, teammates are watching. They see in the heat of the battle how you’re going to react. When the team is winning, they see how you react. When the team is losing, they see how you react. It’s something that you build on.

What did your focus this offseason on losing weight and changing your diet entail?

Gasol: “It all first started with my knee injury and having the little tear on the knee. It proves that you’re not invincible. That opened my eyes . That put me away from the game for a few weeks. There’s nothing worse for a player than to be away from the game. It’s frustrating. You feel like you’re not useful and you see your teammates go through adversity and you can’t help them. With that said, I look back and wonder what can I do to prevent this. One of the things was trying to be stronger and try to be a little healthier. That’s what I was already. I was healthy. Just clean up some stuff and knowing exactly how different things affect your body. Not that I didn’t know. Knowing it better. It really helped me. I don’t think the job is done yet. We have another good goal I can do. In season, it’s really tough to do. But during the summer, I think there’s more I can do. We will do it.

What is that next step?

Gasol: “Getting even leaner and even stronger. I won’t get much athletic because I’m not athletic at all. But just being able to do things tweaks here and there that can make a big difference in your game.”

Gasol: “I don’t think there’s a goal. The weight drop just happens. It’s not a goal. It happens. You eat right and you do things and you’re determined enough, the weight is going to drop. That wasn’t even a goal where we talked about it. The goal was to be the healthiest possible. You can even take it beyond basketball and beyond professional sports. You want to be able to be healthy through your whole life.”

What did you have to clean up?

Gasol: A few things. Nothing that important. Nothing crazy. Just because they say there is zero calories or they say it’s fat free or it’s diet something or something light, it doesn’t mean it’s good for you. Just because they say all those things, it doesn’t mean it’s good for you. Everybody is different. My complexion is different than some people. I found what was good for me and what worked for me. I just stuck to it.

Gasol: To me, I wanted to find organic stuff. The less touched by humans, the better. We normally screw things up, usually to make a profit out of it. But that’s a whole different problem. Just find out what’s good for you and what’s work and be determined every day.

After talking to [Memphis coach Dave Joerger] and those on the Lakers, the overall consensus is that they all love your versatility, your passing, post presence and how you anchor the defense. What’s your perspective on what’s become key in mastering all those different skills?