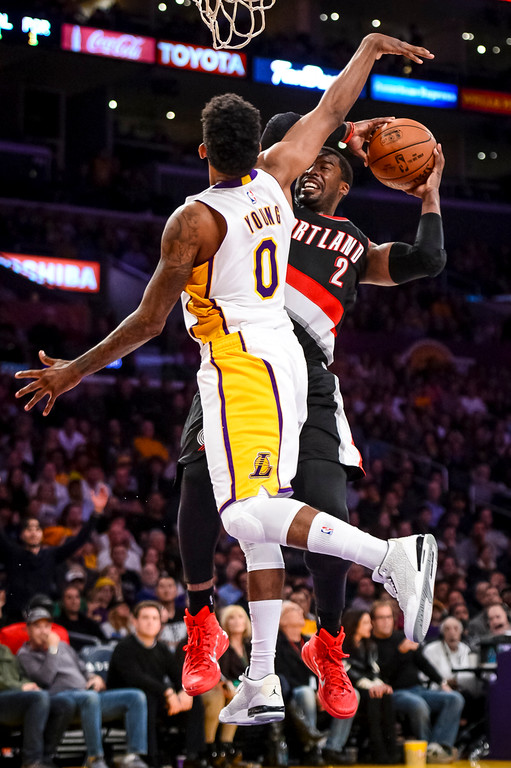 He stood tall and proud by his locker stall, Nick Young appearing in ecstasy after reliving a game-winning shot that made the Lakers’ gregarious forward boast proudly about his abilities.

“They call me ‘I.D.M.’ I don’t miss,” Young proclaimed after hitting a game-winner against San Antonio last month.

Young will not need to change the acronym. But he might need to change the meaning. The Lakers’ 106-94 loss on Sunday to the Portland Trail Blazers at Staples Center featured Young posting only nine points on 3-of-11 shooting, completing a 15-game stretch where he has shot a combined 59-of-173 from the field ever since changing his nickname.

“I have to stop thinking so much and play my game and go out there and have fun,” Young said. “My energy, no matter what, I have to keep my energy high and continue to play the way I’ve been playing.”

As Young continues to struggle in entertaining the Lakers with high-volume scoring, Scott plans to stress to Young during Monday’s practice by using this time to round out the other parts of his game.

Young often showed his frustration after missed shot by shaking his head in disappointment. When he made his first field goal by hitting a 25-foot three-pointer to cut Portland’s lead to 69-67 with 3:05 left in the third quarter, Young even showed off his so-called “Swaggy 3” dance by holding out three fingers as he ran down the court to get back on defense. But other than scoring six points within a minute span to open the fourth quarter, Young offered little else.

“My energy, no matter what, I have to keep my energy high,” Young said, “and continue to play the way I’ve been playing.”

That approach remains in dispute as well.

Lakers guard Jeremy Lin supported Young by showing confidence he will snap out of his shooting struggles. Lin also noted that Young has worked hard in practice and before games to improve his craft.

“He’s one of those guys I don’t worry too much,” Lin said. “It can change like that with him. He’s a scorer. All he needs is one. From there, you open the floodgates.”

But Scott in recent days has suggested Young has not prepared correctly. He noted that Young improved his practice routine on Saturday only after reporters informed Young about Scott’s critiques. Scott also revealed that Young’s practice work has become counter productive namely because he hasn’t completed shooting drills correctly.

“A lot of times in practice he shoots the ball, but he’s not shooting the ball like he does in games,” Scott said. “I told him, ‘You’re going to get out of it what you put in it.'”

And what does Young put in during his shooting exercises?

“More casually in his jokingly way sometimes,” Scott said. “You have to jump on him about getting more focused and more serious.”

And that includes Scott’s want for Young to take ownership on staying organized on team defense, cause deflections and hustle.

But even Scott has his own limitations on Young. After all, Kobe Bryant addressed his season-long shooting struggles by becoming a facilitator. Can’t Young follow Bryant’s lead on this one as he has with his high-volume shooting and trash talking?