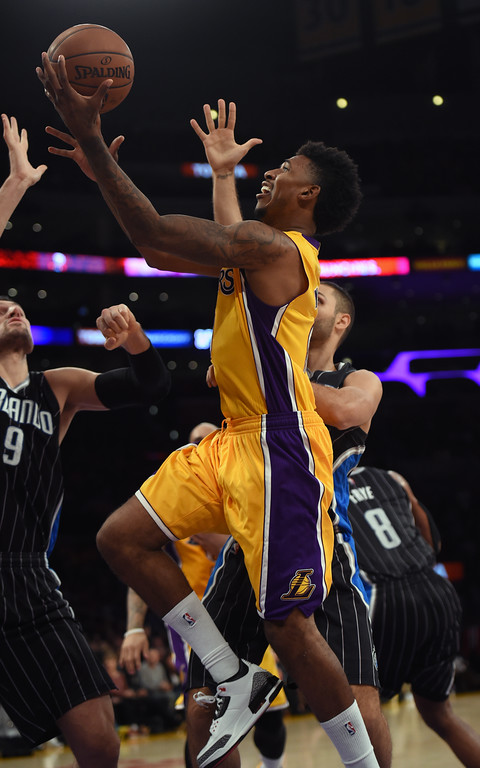 ﻿”The Lakers’ Nick Young #0 drives to the hoop as the Magic’s Nikola Vucevic #9 defends during their NBA game at the Staples Center Friday, January 9, 2015. (Photo by Hans Gutknecht/Los Angeles Daily News)”

Never has Lakers forward Nick Young ever seen a shot he does not like. Never has he taken a shot he felt unsure would drop into the basket.

But with entering Tuesday’s game against the Miami Heat (16-21) at Staples Center averaging 12.4 points on only 25 percent shooting in the past five games, Young spent part of Monday’s practice consulting with both Lakers coach Byron Scott and Kobe Bryant on how to overcome his recent struggles.

In what he described as a “big slump,” Scott repeated criticisms in recent days to Young about both expanding his game and showing a more serious approach during his shooting drills. Scott also emphasized “you don’t live and die on every shot.”

“I needed Coach to talk to me today. Everybody needs somebody sometime,” Young said. I feel all right and feel more confident. My teammates are talking to me.”

That mostly included Bryant, who did not speak to reporters after participating in the first 90 minutes of Monday’s two-hour practice. Bryant has experienced plenty of shooting slumps during his 19-year career. This season alone, he has averaged 23 points on a career-low 37.5 percent shooting.

“He’s teaching me ways to get open and hit teammates,” Young said. “If you pass the ball and they knock down a couple shots, they can’t double team you anymore.”

Rarely has Young ever done that. He has averaged one assist per game. Young’s average of 12 field-goal attempts per game also only trails Bryant’s 20.8 attempts per game. Young has 38.8 percent from three-point range, but he has shot only 5 of 29 (17.2 percent) from shots beyond the perimeter in the past five games. Meanwhile, Young has made all 25 of his free throw attempts during that stretch.

“I relied on my 3 ball too much,” Young said. “I have to get back to playing my overall game and attacking the basket and getting to the line. Once I see a couple of shots go in the hole, it’s all good.”

Scott expressed confidence Young will do end his shooting struggles. But until that happens, Scott wants Young to expand his game so that his effectiveness does not hinge on just his shooting accuracy.

“He can’t just rely on the offensive end of the floor,” Scott said. “If he wants to help us win, you have to rebound and defend, steals communicating on that end of the floor. It was a good talk and I think he’ll respond.”

Lakers’ Kobe Bryant completes part of practice and could play vs. Miami