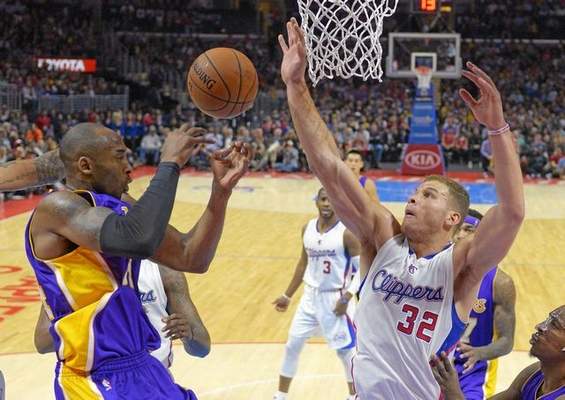 Lakers star Kobe Bryant, left, who hasn’t played since a 114-89 loss to the Clippers on Wednesday, practiced Monday and could play Tuesday against the Miami Heat at Staples Center. (Mark J. Terrill/The Associated Press)

Amid all the unanswered questions surrounding Kobe Bryant’s health or even if he will play in tonight’s game against the Miami Heat at Staples Center, the Lakers seem intent on one thing.

The Lakers currently have not discussed yet the possibility of sitting Bryant for the rest of the 2014-15 season.

“This is going to be game-by-game and will be that way until the end of the season,” Lakers coach Byron Scott said after Tuesday’s morning shootaround at the Lakers’ practice facility in El Segundo. “If we ever decide to shut it down for the rest of the season, we haven’t gotten near that point at this particular point of time. We continue to go day-by-day.

Bryant attended the Lakers’ morning shootaround, but spent all of that time receiving treatment. Bryant did not speak to reporters, but Scott reported that Bryant said “he feels fine.” At least fine enough that Scott said he would play Scott if the Lakers were hosting a matinee game. But with the Lakers tipping off at 7:30 p.m., Scott still labeled Bryant’s playing status as a “game-time decision.”

“He’s a little more energized,” Scott said. “That’s going by what I see and what I hear and when I talk to him.

Bryant has sat the past two games and has missed three of the last four contests. Scott stressed that the 36-year-old Bryant does not feel any soreness in his left Achilles tendon and left knee, two injuries that sidelined him last season for all but six games. Instead, Scott said Bryant has “general body soreness.”

Bryant averaged 24.6 points on a career-low 37.2-percent clip in 35.4 minutes through the Lakers’ first 27 games. But after going through a five-game stretch averaging 20.6 points on a 29.2-percent clip, Bryant sat three consecutive games in late December. Before his recent absence, Bryant became a facilitator and averaged 17 points on 40.9-percent shooting and eight assists in 31.4 minutes. Scott also plans to limit Bryant’s minutes to under 32 and will rest him on at least game of the Lakers’ eight remaining back-to-back sets.

All of which has sparked Scott and Bryant to have continuous dialogue with each other as well as Lakers head athletic trainer and general manager Mitch Kupchak. Scott reported that Kupchak has kept Lakers president Jeanie Buss and vice president of player personnel Jim Buss on how they will handle Bryant moving forward.

“It’s been good. Most of it has been trying to preserve him as much as possible,” Scott said. “That’s the biggest thing to be honest with you to make sure he gets through this season healthy and get ready for the next season as well. What we want to do with one year remaining on his contract is make sure he can play as much as possible that year. The more minutes I play him is the worst thing to do.”