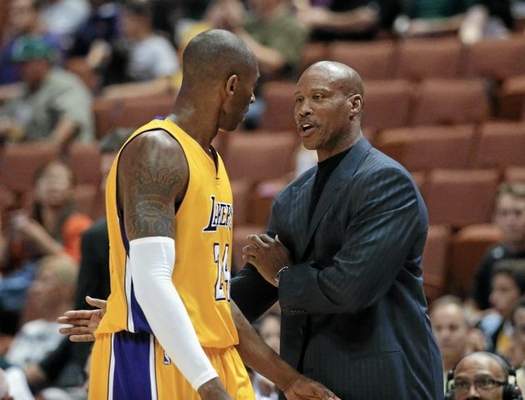 The most pressing: the results surrounding his surgery on Wednesday to treat a torn right rotator cuff in his right shoulder. Bryant was scheduled to have surgery at 11 a.m. on Wednesday, but the Lakers won’t have the results until likely in the afternoon. Then, the Lakers are expected to know officially that Bryant will not play for the remainder of the 2014-15 season.

“In my mind he’s coming back next year,” Scott said, “unless he tells me something different.”

So with the expectation that Bryant will play in final year of his contract that will pay him $25 million, how does Scott envision his role will become next season?

“For Kobe, play him at mid to low 20’s minute wise,” Scott said. “But you have to have some horses to be able to do that.”

END_OF_DOCUMENT_TOKEN_TO_BE_REPLACED 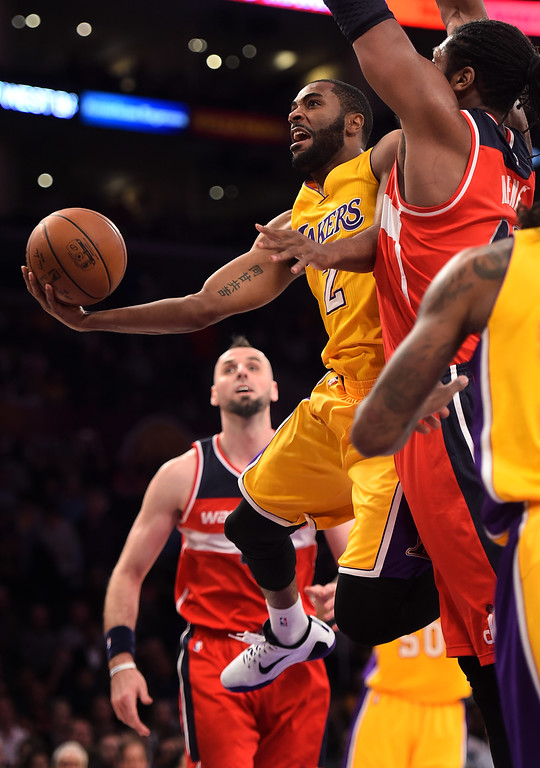 The losing became too unbearable. The Lakers lost their primary scorers and shot creators through absences both prolonged (Kobe Bryant) and temporary (Nick Young). Evidence suggested the endless spiral of negativity will not end soon.

But with the Lakers treating the remainder of their 2014-15 season with hopes to avoid becoming the worst team in L.A. franchise history and develop future talent, Wayne Ellington provided a case study on what a player’s potential can become when given an opportunity.

The Lakers outcome may have stayed the same, their 98-92 loss to the Washington Wizards on Tuesday at Staples Center marking the first time the franchise lost nine consecutive games since the 1993-94 season. Yet, Ellington’s career-high 28 points on 12-of-20 shooting, three assists and three steals as the Lakers’ starting shooting guard highlights a jack-of-all-trades effort partly because of a simple mindset he carried once he stepped on the floor.

“I made up my mind that I’m going to come out aggressive,” Ellington said. “We’re a team that needs to be hungry.”
END_OF_DOCUMENT_TOKEN_TO_BE_REPLACED 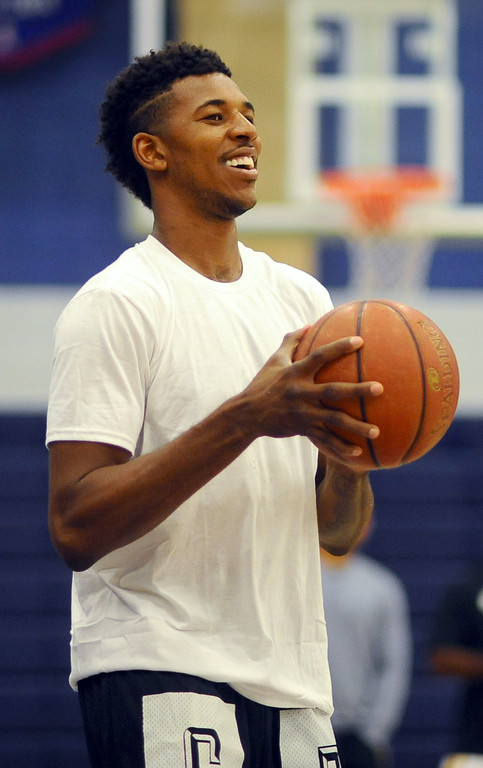 The acronym that best describes Nick Young no longer involves his self-given nickname, “IDM,’ standing for “I Don’t Miss.”

Instead, that involves “MRI,” which Young is having on Tuesday after spraining his right ankle during Monday’s practice. It appears unlikely Young will play when the Lakers (12-33) play the Washington Wizards (30-15) on Tuesday at Staples Center. But the Lakers will provide an official evaluation on Young’s moderately sprained ankle once his MRI results are available.

Young’s likely absence will fuel his frustration over playing against the Wizards where he played in his first 5 1/2 NBA seasons from 2007-2012 before he was traded to the Clippers. Young said this season he “hates” the Wizards, though that lately seems to involve the least of his worries.

Young played only nine minutes and sat out the entire second half of the Lakers’ loss on Sunday to the Houston Rockets because coach Byron Scott did not like his body language and effort. Young has also shot 32.2 percent through 13 games in January.

The two men competed in physically vicious and mentally exhausting battles as they strove for NBA championships. Kobe Bryant and Paul Pierce have continuously bantered over the years anytime they step on the floor.

But even if the Lakers will likely forever view Pierce as a member of the hated Boston Celtics, the Washington Wizards’ forward showed his sentimental side as he processed Bryant needing to have surgery on his right shoulder in what will likely become a season-ending injury.

“It always saddens me. Kobe is one of my NBA brothers,” Pierce said on Tuesday after morning shootaround at Staples Center, hours before the Lakers (12-33) will host the Wizards (30-15) here. “For him to go down with injury, it always hurts.

END_OF_DOCUMENT_TOKEN_TO_BE_REPLACED 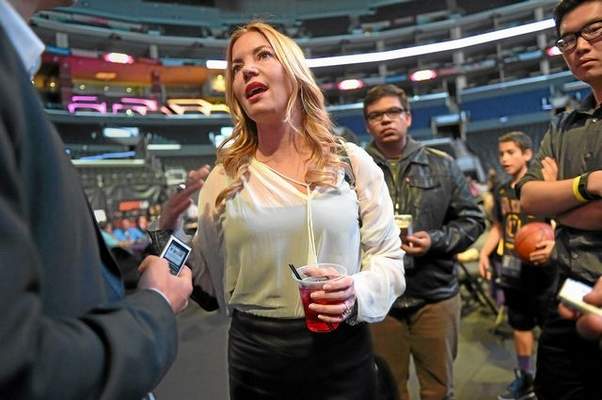 The Lakers have plenty of reasons to look ahead to the next season.

The Lakers (12-33) are on pace to finish their worst year in L.A. franchise history. Kobe Bryant will have surgery on Wednesday to repair a torn rotator cuff in his right shoulder, an injury that will likely sideline him for the remainder of the current campaign. And there’s this: for the first time in eight years, the Lakers will hold their 2015 training camp in Hawaii.

That will include the Lakers practicing in Honolulu at the University of Hawaii and then playing two exhibition games on Oct. 4 and 6 at Stan Sheriff Center.

“Hawaii has been like a second home to the Lakers since my father first took the team there in 1988,” Lakers president Jeanie Buss said in a statement. “The love and support we’ve always received from the people in Hawaii has meant so much to us over the years, and we’re thrilled to be returning there next fall and seeing so many of our loyal fans.”

The Lakers have held training camp in Hawaii 12 times, beginning in 1988 and most recently in 2007. But the Lakers held off for a number of reasons. Former Lakers coach Phil Jackson preferred holding training camp in Los Angeles. The Lakers also had exhibition games in 2010 in both London and Barcelona.

But the Lakers were aware that holding training camp in Hawaii could provide another selling point for the storied franchise when they pursue free agents this summer.

The way Nick Young tells it, the Lakers have a pretty simple solution on how to make up for Kobe Bryant likely missing the rest of the 2014-15 season once he has surgery on Wednesday to repair his right shoulder.

“Pretty much just give me the ball and get out the way,” Young said.

If only were it that easy.

The Lakers would have issues with anyone trying to replace Bryant’s skillset. Even if he shot a career-low 37.3 percent from the field, Bryant still averaged 22.3 points and 5.6 assists either as a high-volume shooter or an efficient distributor.

Young? His 14.4 points per game average only trails behind Bryant on the team. But Young has shot 32.2 percent in the last month. He played only nine minutes in Sunday’s loss to Houston because of Byron Scott’s frustration with his body language and effort. Young also suffered a moderately sprained right ankle in Monday’s practice that leaves him listed as questionable for Tuesday’s game against Washington.

“I’ll go out there and see what happens,” said Young, who rolled his ankle after rookie guard Jordan Clarkson accidentally stepped on it during a scrimmage. “I’m a soldier. I roll with the punches.”

That apparently includes Young’s recent benching that entailed missing the entire second half in Sunday’s loss against the Rockets.

“The message I was sending [Sunday] night was, ‘You basically didn’t look like you wanted to play,'” Scott said. “‘You weren’t defending. You were just standing around.’ He was throwing the ball all over the place. So I chose not to play him, because if you look disinterested, with body language and things like that, to me you don’t want to play.”
END_OF_DOCUMENT_TOKEN_TO_BE_REPLACED

The obstacles seem stacked against Kobe Bryant. This time, the challenges do not involve endless double teams, elevating an inconsistent supporting cast, overcoming low shooting accuracy or competing against a competitive Western Conference.

Instead, the opponent involves Father Time, the foe that has knocked Bryant down for three consecutive seasons. It has become something far more vicious than the Boston Celtics ever delivered. The outcomes have resulted in Bryant shattering his left Achilles tendon in the 2012-13 season, fracturing his left knee in the 2013-14 campaign and tearing his rotator cuff in his right shoulder in 2014-15. Yet, with Bryant planning to have surgery on Wednesday morning to treat his right shoulder, the Lakers remain convinced their 36-year-old star will tackle and overcome his latest challenge with the same vengeance he has with everything else.

“I don’t see Kobe as a type of guy who wants to leave his legacy on those terms,” said Lakers coach Byron Scott, who mentored Bryant his rookie season 19 years ago. “He wants to go out on his own terms.”

END_OF_DOCUMENT_TOKEN_TO_BE_REPLACED

After a second opinion taken on Monday confirmed he has a torn rotator cuff in his right shoulder, Lakers guard Kobe Bryant will have surgery on Wednesday morning.

The Lakers have declined to offer an official timetable on Bryant’s return until after he has surgery. But the Lakers anticipate this surgery will sideline him for the remainder of the 2014-15 season. This will mark the third consecutive year his season ended abruptly. He shattered his left Achilles tendon on April, 2013 and rehabbed for the following eight months. Bryant then played in six games last season before fracturing his left knee. In his 19th NBA season, Bryant averaged 22.3 points albeit on a career-low 37.3 percent shooting through 35 games.

Lakers coach Byron Scott reported that Bryant first felt right shoulder pain about a month-and-a-half ago. But he quickly dismissed the severity of the injury. Bryant aggravated it in Wednesday’s loss in New Orleans after throwing down a baseline dunk. After icing his shoulder on the bench, Bryant then returned late in the game and mostly shot, passed and dribbled with his left hand. He then left for the locker room with about a minute left in the game. 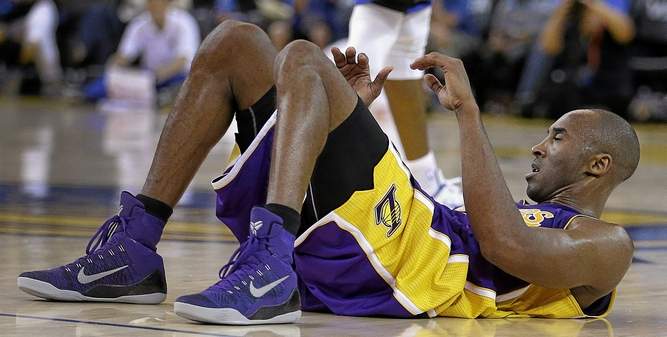 Lakers guard Kobe Bryant has suffered another setback. How long will this one keep him down? (File photo/AP Photo)

Those 13 years of battling in the paint and slugging it out against the Lakers has left Houston Rockets coach and former Celtics forward Kevin McHale walking with a noticeable limp.

Once all these years pass, will the same happen to Kobe Bryant?

“That’s so hard to say. Eventually it catches up to you,” McHale said before the Lakers’ 99-87 loss on Sunday to the Houston Rockets at Staples Center. “Kobe has been blessed to be in this league for a long time and he’s a great player. But I’ve seen other great players, when your time is up, it’s too bad.”
END_OF_DOCUMENT_TOKEN_TO_BE_REPLACED 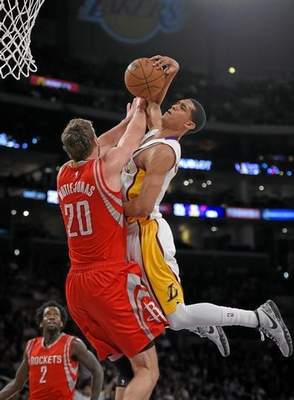 Scott offered Clarkson and Lakers backup center Tarik Black some rookie hazing, forcing the two players to push toy babies in strollers through the rest of the 2014-15 season.

“They’re in charge of bringing them to every home game, making sure they’re right by their locker and that the baby’s not crying,” Scott said. “They’ve got to watch their baby, can’t lose the baby, and then on game days on the road, they have to wear their pink backpacks.”
END_OF_DOCUMENT_TOKEN_TO_BE_REPLACED