The uncertainty over when Jeremy Lin would ever step on the court lingered seemingly at every moment of the day.

The uncertainty started when Lin sat in the Lakers’ loss on Friday to San Antonio to accommodate Jordan Clarkson’s first rookie start, marking his first non-appearance because of a coaching decision for the first time in three years.

The uncertainty continued when Lin’s conversation on Sunday morning Lakers coach Byron Scott only revealed the circumstances could change every game, though he hardly knew when or how.

The uncertainty remained unchanged as the Lakers opened Sunday’s game at Staples Center against the Houston Rockets, the team that traded Lin this summer in a salary dump after two seasons filled with fluctuating roles.

But nothing has matched Lin’s unpredictability with the Lakers. It has become a season where Lin struggled adapting toward sharing ball handling duties with Kobe Bryant, adjusting to Scott’s Princeton-based system and the fluctuating minutes as a starter and reserve along the way.

Perhaps that explains why Lin revealed he felt “thankful” for playing in an otherwise meaningless game. The Lakers’ 99-87 loss on Sunday to the Houston Rockets at Staples Center marked the team’s eighth consecutive loss. The Lakers (12-33) still have the NBA’s fourth-worst record. The Lakers seem destined to brace for more negativity when Kobe Bryant will meet with another doctor on Monday for another opinion on his torn rotator cuff in his right shoulder.

For Lin, though, the game meant everything. His 14 points on 2-of-9 shooting, 10-of-14 mark from the foul line, six assists and three turnovers in 28 minutes hardly marked a perfect game. But it at least provided temporary solace for Lin as he tries to navigate through his new role.

“Definitely a DNP would change your perspective on things and allow me to take a step back,” Lin said. “So I’m just thankful I got on the court. I try to play my heart out and have fun. I was glad I was able to do that.”
END_OF_DOCUMENT_TOKEN_TO_BE_REPLACED 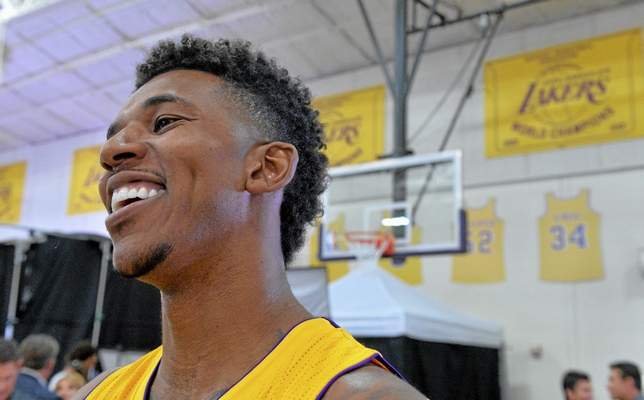 Nick Young, flashing his signature smile despite his uneven on-court performances, enjoys being a Laker in what has been another tough year. (Thomas R. Cordova photo)

But Nick Young offered none of those qualities in the Lakers’ 99-87 loss on Sunday to the Houston Rockets at Staples Center. For the first time in his two years with the Lakers, Young experienced a new low point. He went scoreless. He took only two field-goal attempts. He committed three turnovers. He only played eight minutes, 32 seconds, and sat out the entire second half.

“It looked to me to be honest with you that he didn’t want to be there,” Lakers coach Byron Scott said of Young. “That’s how all I looked at it.”
END_OF_DOCUMENT_TOKEN_TO_BE_REPLACED

The Lakers on Sunday night are slated to start Jordan Clarkson, Wayne Ellington, Robert Sacre, Ryan Kelly and Jordan Hill against the Houston Rockets. It’s the same unit that started Friday in a loss at San Antonio and coach Byron Scott said that will remain the same for some time.
“The starting unit will stay this way for probably the next 15, 20 games,” Scott said at the morning shootaround, “but the roles on the bench will probably change. And it’s just depending. That could go game-by-game. I’m not set in stone with that, but the starting unit I am, like I said, for the next 15 games or so.
“But the bench, that can change game-by-game. I’m not real concerned about the bench. I’m seeing if our starters can get some sort of flow going. And then the energy from the guys off the bench. So if I’m getting certain guys playing well off the bench, I’ll stick with it. If not, I’ll change it.”
On Friday at San Antonio, Jeremy Lin did not figure into the equation at all. He did not play and next to his name in the box score was a fat DNP. Scott was asked if he had spoken to Lin about it.
“We haven’t had a conversation about it,” Scott said about 11:30 a.m. “We’re going to talk about it today a little bit, just to tell him what I expect, you know, in this role. And like I said, this role isn’t permanent. I didn’t play him last game because I wanted to stick to a 10-man rotation. Tonight, it might change. I don’t know. But right now, the guys that are coming off the bench, their roles are not permanent.”

Jordan Clarkson, right, of the Lakers guards Tony Parker of the Spurs on Friday in San Antonio/Photo by Associated Press

Jordan Clarkson got his first start Friday here in his rookie season with the Lakers. The point guard scored 11 points on 5 of 9 shooting with three rebounds, four assists and just one turnover in 29 minutes of the Lakers’ 99-85 loss at San Antonio.

“I didn’t see that coming,” Scott said. “When I threw him in there I said, ‘Man, I’m kind of throwing him in the fire, but let’s find out what he can do.’ And again, going against the Spurs and going against an All-Star in Tony Parker for your first start; being at home, I think that helped him as well, being able to play in front of his family and friends. But the first thing I told him was, ‘Enjoy the game, but have the poise … and slow down.’ And he did all those things.”

Kobe Bryant and Dwight Howard traded endless barbs both through actions and words as teammates. They since engaged in an on-court scuffle where Bryant called Howard “soft” and Howard answered with unspecified retorts. After Howard left the Lakers two summers ago for the Houston Rockets, plenty of comparisons loom on Bryant’s serious demeanor and Howard’s more playful personality.

But Howard offered some diplomacy surrounding his reaction when he learned that Bryant tore a right rotator cuff in his right shoulder, an injury that could sideline him for the remainder of the 2014-15 season.

“I was sad,” Howard said after morning shootaround on Sunday at Windward High School. “He’s battled through a couple of injuries lately. It hurts to see him work so hard to come back from injury and then he has another one. So I was sad.”
END_OF_DOCUMENT_TOKEN_TO_BE_REPLACED

The Lakers’ star visited with team doctor Steve Lombardo on Friday for a reexamination after an MRI suggested he had a torn rotator cuff in his right shoulder. As shown in a video Bryant posted on “The Players Tribune,” Lombardo soon delivers some depressing news.

“There are four muscles for your cuff,” Lombardo said to Bryant. “Unlike this previous MRI, and your ultrasound you had a couple of months ago, this is pulled off. Torn, [muscle] No. 3.”

Amid all that noise, Lakers rookie guard Jordan Clarkson sat by his locker tuning it all out. Instead, Clarkson opened up a laptop computer and watched endless clips of the San Antonio Spurs. Lakers coach Byron Scott had informed Clarkson following Friday’s morning shootaround he would make his first career start in his hometown, no less. So Clarkson did not want to leave any stone unturned.

“I want to be great and be one of the best guys in the league,” Clarkson said. “Hopefully that happens. I’m trying to be solid right now.”

Clarkson made that one small step. The Lakers’ 99-85 loss to the San Antonio Spurs on Friday at AT&T Center may have marked the team’s seventh consecutive loss. The latest defeat may have ensured the Lakers with a 12-32 mark, the NBA’s fourth-worst record. Clarkson may have allowed his childhood idol Tony Parker to post 17 points on 7-of-14 shooting and four assists in 22 minutes. But Clarkson represented the Lakers’ lone bright spot, 11 points on 5-of-9 shooting, four assists and one turnover in a career-high 29 minutes offering promising images of a player both high on potential and work ethic.

“I’m very happy with the way Jordan played,” Scott said. “It looked like he was very poised. The moment wasn’t too big for him.”
END_OF_DOCUMENT_TOKEN_TO_BE_REPLACED 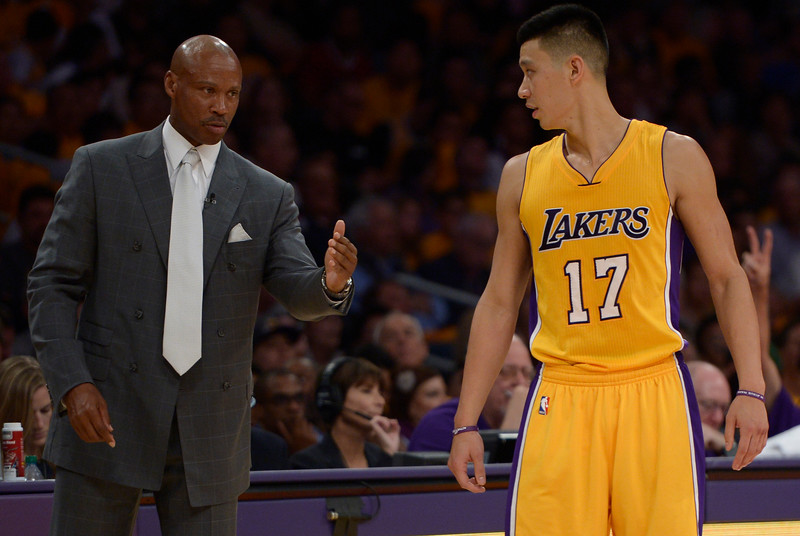 SAN ANTONIO — Jeremy Lin sat on the bench all night long, a scenario that last unfolded just days before “Linsanity” burst through the Big Apple for a two-month stint that proved unforgettable.

The Lakers’ 99-85 loss to the San Antonio Spurs on Friday at AT&T Center featured all the elements that made this game forgettable. The Lakers (12-32) lost their seventh consecutive game. They had no answer for the Spurs’ stars in Tony Parker (17 points), Kawhi Leonard (15 points), Manu Ginobili (15 points) or Tim Duncan (14 points). But the game became notable for two reasons.

Lakers rookie guard Jordan Clarkson received his first career start, posting 11 points on 5-of-9 shooting, four assists and one turnover in 29 minutes. Clarkson’s appearance in front of his hometown came at the expense of Lin, who received the dreaded “DNP” because of a coach’s decision for the first time since Feb. 2, 2012. That was mere days before “Linsanity took off. So why did Ronnie Price, who went scoreless on four shot attempts in 19 minutes off the bench, play in front of Lin?

“I thought I’d give Ronnie more of a look tonight,” Scott said. “I know what Jeremy can do. The next game, it might be different.”
END_OF_DOCUMENT_TOKEN_TO_BE_REPLACED

SAN ANTONIO — It did not take long for the Lakers to adjust to life without Kobe Bryant.

Lakers coach Byron Scott pledged he will wait until Bryant has a reexamination on Monday on the torn rotator cuff in his right shoulder to decide whether he will have season-ending surgery. But that did stop Scott from shuffling his lineup completely that will include rookie guard Jordan Clarkson (point guard), Wayne Ellington (shooting guard), Ryan Kelly (small forward), Jordan Hill (power forward) and Robert Sacre (center).

The most notable change involved Clarkson, who will make his first career start in his hometown over veteran guard Ronnie Price.

“I want to see him in a bigger role,” Scott said. “We have to find out if he can play. I think he can and believe he can. But I need him to have some extended minutes in an extended role for an extended period of time to really get a good idea if he can or not.”

“I’m not weighing anything,” Scott said. “I’m going by the seat of my pants.”

Lakers’ Kobe Bryant to have another doctor appointment on Monday

Lakers’ Byron Scott on Kobe Bryant: “He doesn’t want to go out this way” 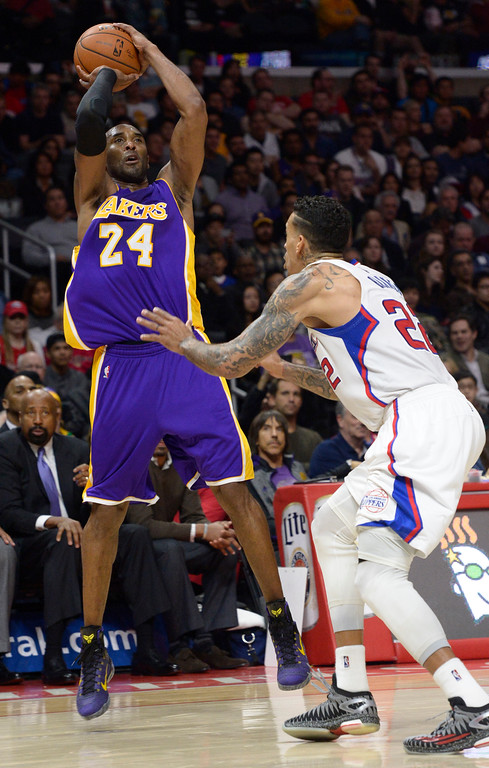 SAN ANTONIO — Lakers guard Kobe Bryant had a reexamination on Friday with Dr. Steve Lombardo that confirmed the MRI results that said he has a torn rotator cuff in his right shoulder, according to a league source familiar with the situation.

The Lakers’ star discussed “various options,” as one source put it on how Bryant will treat his latest injury. But Bryant plans to meet with sports-medicine specialist Neal ElAttrache on Monday to further assess his next step. The Lakers expect Bryant will make a final decision then, though it is not binding in case Bryant needs more time to determine his next step.
END_OF_DOCUMENT_TOKEN_TO_BE_REPLACED