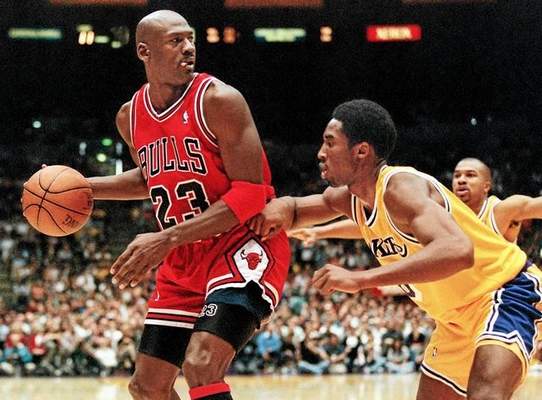 So when Bryant first matched up against Jordan on Dec. 17, 1997, the Lakers’ star wanted to make the most out of it. Bryant did not act intimidated, knowing that demeanor neither matches his personality nor Jordan’s. Though the two bantered back and forth, Bryant did not just resort to trash talking.

Instead, Bryant asked Jordan during a stoppage of play how to find more space to shoot.

“Feel the defense with your legs,” Jordan told Bryant. “You can take advantage of that.”

Bryant called the feedback “very inspiring for me,” for reasons that included Jordan’s openness and, well, the source.

And yet, Jordan still has bragging rights over Bryant, the Lakers’ star still one title short of matching Jordan’s ring count. The NBA TV interview showed footage of Jordan making that very point to Bryant during Jordan’s last season in the 2002-03 campaign when Bryant’s three championship trophies represented only half of Jordan’s hardware.

With Bryant revealing his career-wide NBA goal has entailed just to “win as many championships as possible,” the Lakers’ star often invokes his ring count when trash talking against other opponents. But he could not use that tactic against Jordan.

“I grew up watching him and grew up having that same type of edge and competitiveness,” Bryant said. “Michael and I both know there are certain players we can intimidate and certain players that are afraid. Every now and then, you run into a player that has the same DNA you do and same competitive spirit you do. You realize the bullying and trash talking is not going to work with this person.”

That marks a mentality Bryant adopted partly because of Jordan, who often said publicly he was aware of always wanting to put on a good performance for the fan who would see him play in person for the first time.

“It doesn’t matter if I’m sick. It doesn’t matter if I have a sprained ankle,” Bryant said. “The kid sitting up there might be the next kid sitting up there and needs to get inspiration from that. I need to get out there and play. Basketball never felt like work to me. Once I came to the NBA and looked around and saw others weren’t working as much, I saw how I went about it was hard work. But for me, I love what I do and I want to do it as well as I can.”

Hence, Bryant’s questions to Jordan just as they would square off.