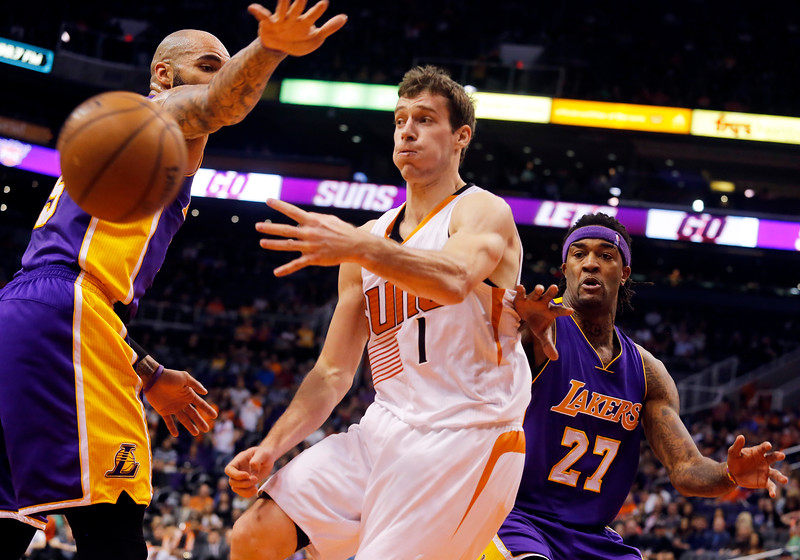 The smile on his face widened. The tone in Goran Dragic’s voice sounded giddy.

How would the Phoenix Suns guard feel about playing for the Lakers once he becomes an unrestricted free agent this summer?

“It’s not just L.A,” Dragic said in an interview last month with Los Angeles Newspaper Group. “I think everybody. Any team in the league. I’m rare in this position. I’ve been working hard and I can explore my options.”

Dragic made it clear he would become opt out of his $7.5 million to become an unrestricted free agent this summer even though he said he is “really happy here in Phoenix.” Yet, multiple reports indicate that Dragic would like the Suns to trade him before Thursday’s deadline.

Should the Lakers make a push for him instead of waiting to pursue him once free agency begins on July 1? There are risks to both equations.

The Lakers do not have very many assets. The Lakers already owe Phoenix their first-round pick as part of the Steve Nash trade. If the Lakers (13-40) land in the top-five, however, they will keep the pick and give the Suns their 2016 selection instead that becomes top-three protected.

The Lakers are not trading Kobe Bryant for obvious reasons. Nash has an expiring $9.8 million contract, but has been ruled out this season because of chronic back injuries. Carlos Boozer cannot be traded since the Lakers acquired him through the amnesty waiver.

Lakers forward Jordan Hill remains a trading chip. Hill has posted career-highs in points (12.3), rebounds (8) and minutes played (28). His two-year, $18 million contract also appears attractive because any trading partner can decline his team option for next season. Yet, Hill is recently nursing an injury to his right hip flexor that kept him out for the past five games.

Lakers guard Jeremy Lin seems difficult to deal after averaging 10.2 points on 42.6 percent shooting, 4.6 assists and 2.7 turnovers in 25.5 minutes per game. His expiring $14.9 million seems burdensome, though $8.4 million of his salary goes against the cap.

The Lakers could also offer Ed Davis, who told this newspaper recently he plans to opt out of his $1.2 million player option this summer in hopes for a long-term deal with the Lakers. Lakers forward Nick Young is in the first year of a four-year $21.5 million deal, but has struggled lately with his shooting accuracy.

It seems doubtful any of those options would be enough to secure Dragic. The Lakers willing to send their mid first-round pick as part of the Lin trade and rookies Julius Randle and Jordan Clarkson would become more enticing. But that sacrifices the Lakers’ hope to rebuild with young players. The Lakers could also feel inclined just to wait for this summer since Dragic views them as a potential suitor.

Yet, acquiring Dragic before the trade deadline would both enable the Lakers to sign him to a five-year deal instead of a four-year deal while also leaving enough cap space to pursue another high-caliber free agent.

Either approach obviously helps the Lakers rebound from having their two worst seasons in franchise history. But with the team hoping to expedite that rebuilding process, it currently remains unclear how they want to go through that process.