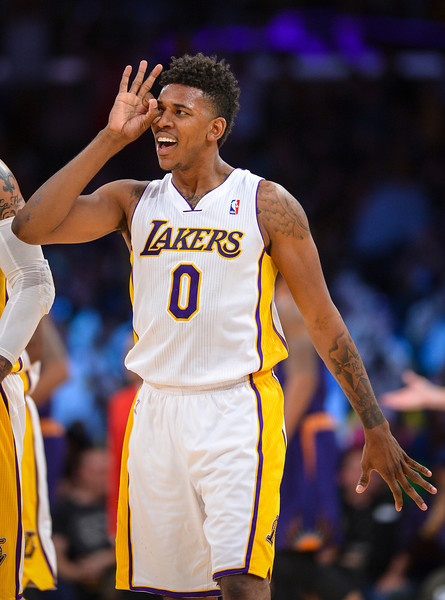 Young will stay sidelined for when the Lakers (14-41) visit the Utah Jazz (XX) tonight at EnergySolutions Arena because of a swollen left knee.

“He’s trying to get as much inflammation out there as much as possible,” Lakers coach Byron Scott said. “We’ll see how he feels tomorrow.”

Young also missed practice on Monday and Tuesday after feeling soreness in his left knee during Sunday’s win over the Boston Celtics. He had also suffered a non-displaced fracture and bone bruise left knee last season that kept him out for two weeks, but Scott said he remains unaware if the injuries are related.

The Lakers will still field the same starting lineup for the second consecutive game, featuring Jordan CLarkson (point guard), Wayne Ellington (shooting guard), Ryan Kelly (small forward), Carlos Boozer (power forward) and Robert Sacre (center). But with veteran Ronnie Price out for around six to eight weeks after having surgery on his right elbow, Scott plans to play both Clarkson and Jeremy Lin around 20 to 25 minutes per game.

“If one is playing better than the other, they’ll get the bulk of the minutes,” Scott said. “I’m thinking of playing them both together and give them added shots.”

Lakers’ Mitch Kupchak plans to build for future, even at expense of Kobe Bryant