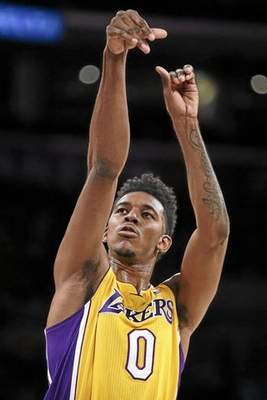 Lakers forward Nick Young injured his thumb Thursday and will be out for six to eight weeks. Chris Carlson — AP

Lakers forward Nick Young said he will sit out Friday’s game against the Milwaukee Bucks (32-25) at Staples Center, marking the second consecutive contest he will miss because of a sore left knee.

Young did not offer any further comment beyond confirming his upcoming absence. Young did not practice on Thursday other than shoot a series of stationary free throws. He spent the rest of the time receiving treatment and was seen briefly talking with Lakers general manager Mitch Kupchak as he sat on a bench along the sideline.

“I don’t think it’s serious,” Lakers coach Byron Scott. “But it’s serious enough that he might miss another game or two. I know it’s getting better and the swelling is going down.”

The Lakers (14-41) have won two consecutive games for the first time in two months with a starting lineup that included Jordan Clarkson (point guard), Wayne Ellington (shooting guard), Ryan Kelly (small forward), Carlos Boozer (power forward) and Robert Sacre (center). Scott has said he would reevaluate his lineup each game for the remaining 17 contests, but he would not commit to his starting lineup against the Bucks. But Scott strongly suggested he may feature a post-oriented lineup.

“I haven’t really thought about Milwaukee yet, to be honest with you,” Scott said. “I’ll start thinking about them tomorrow. They’re one of those young, athletic basketball teams that switch a lot with everything they run. So for us, we have to be patient and look for the mismatches. We have to take advantage of our size in the post and punish them as much as possible.”