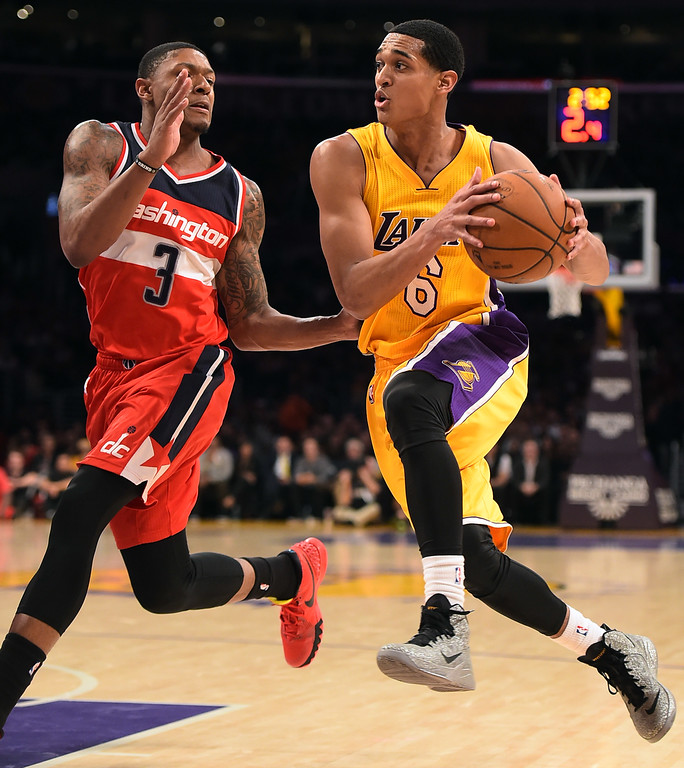 Jordan Clarkson of the Los Angeles Lakers tries to get around Bradley Beal of the Washington Wizards during their game January 27, 2015 at the Staples Center in Los Angeles, CA.(Andy Holzman/Los Angeles Daily News)

The slight remains sharp in Jordan Clarkson’s mind, adding fuel to a running engine that has already taken him to great heights.

Clarkson may have plummeted to the 46th pick of the 2014 NBA Draft. But after averaging 13.6 points, 3.7 assists, 3.2 rebounds in his 13th consecutive game as a starter, it seems clear that the Lakers made a steal with their second round draft selection.

But all things considered, where does Clarkson feel a team should have drafted him?

“I’m a second round pick, the 46th pick,” Clarkson said, smiling. “That’s where I was supposed to go. I’m just trying to prove people wrong.”

Yet, Clarkson is also trying to prove the Lakers right. In a panel on Time Warner Cable Access SportsNet Thursday night with host Chris McGee and analyst Dave Miller, I noted Clarkson’s belief that his career will most benefit playing with the Lakers.

He did not have the pressure with playing time and expectations to become the franchise’s savior. Clarkson learned under established veterans, such as Steve Nash and Kobe Bryant. Lakers coach Byron Scott has since granted Clarkson opportunities to play.

It turns out getting drafted 46th is not so bad after all, even if Clarkson will still use that as motivation.