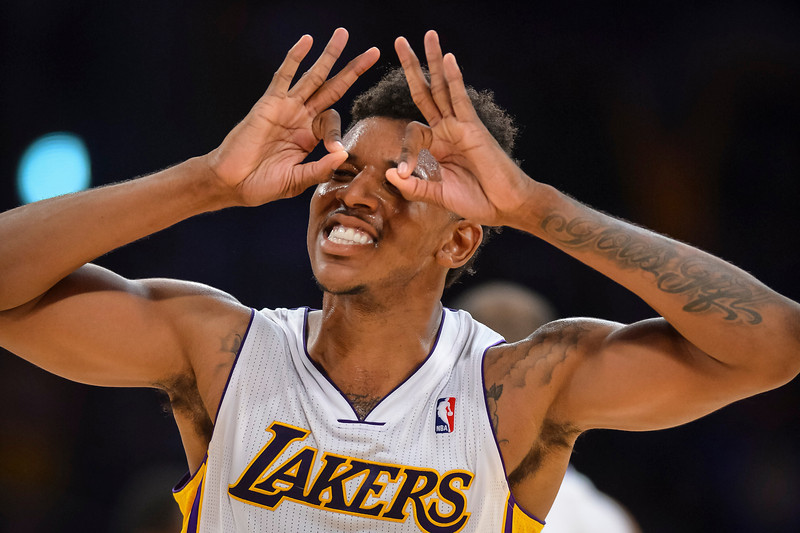 Lakers’ Nick Young uses his fingers to indicate 3 points after he made a clutch 3 point play late in the fourth period against the Magic at Staples Center Sunday, March 23, 2014. Laker defeated the Orlando Magic 103-94. (Photo by David Crane/Los Angeles Daily News)

Memphis, Tenn. — Nick Young will miss his sixth consecutive game when the Lakers (16-44) visit the Memphis Grizzlies (43-17) tonight at FedEx Forum because of continued swelling in his left knee.

Young did not participate in Friday’s morning shootaround and Lakers coach Byron Scott said he is currently unsure if he will schedule practice for Saturday. But Scott said he hopes Young could squeeze in a workout regardless of the Lakers’ practice and then return for Sunday’s game against the Dallas Mavericks at Staples Center.

The Lakers have gone 2-3 in Young’s absence, though it’s hard to really pinpoint anything regarding the team’ss victories and losses on their eccentric forward considering the team’s season-long struggles. Young has averaged 13.4 points albeit on a career-low 36.6 percent shooting. His numbers have been worse in January (13.2 points on a 32.2 percent mark) and February (9.9 points on a 32.4 percent clip).

Young first sat out for the first six weeks of the 2014-15 season because of a broken right thumb. But then he instantly revitalized the Lakers with secondary scoring to complement Kobe Bryant, averaging 15.3 points on a 40.3 percent clip in January. Young’s goofiness also entertained teammates, coaches and reporters alike.

But then Young’s shooting accuracy waned. He sat out the second half of one game because Scott disliked his body language and effort. Young also felt offended Scott sat him in another game despite receiving medical clearance to play after nursing a sprained right ankle.

“You want him to go into the summer with some confidence and know that he can still get it done,” Scott said. “I would say his confidence has not been shaken. But I’d be telling a lie. Every shooter that goes through this, you start to wonder if you’ll get it back or if you’re as good of a shooter as you think you are. Mentally, this is where it really tests you.”

Scott, who cemented himself as a strong outside shooter during the Lakers’ Showtime Era, admitted he felt “surprised” over Young’s shooting troubles. But he offered some suggestions on how Young can reverse the tide.

“Hopefully when he gets back, he’s getting better quality shots. He’s taking a lot of shots under duress,” Scott said. “So we’ll have to do a better job of trying to get him better looks.”

A reporter then joked that Babe Ruth thrived quite well under those circumstances.

“Babe Ruth was probably one of the best players in baseball history,” Scott said. “I know Nick thinks he’s up there with Reggie Miller and Larry Bird from a shooting standpoint. But if you look at their shooting percentage and you look at his, he’s not there.”

Young isn’t. He has averaged a 42.3 percent clip through eight NBA seasons. Miller shot 47.1 percent through 18 NBA seasons with the Indiana Pacers. Bird went 49.6 percent from the field in 13 years with the Boston Celtics. Scott shot 48.2 percent in 14 NBA seasons, including 11 with the Lakers.

Yet, Young has jokingly labeled himself this season as the NBA’s best shooter. Recently, Young also called himself “a star,” a remark that caused Scott to raise his eyebrows.

“A star in what?” Scott asked with sarcasm.

A reporter answered, “His own show.”

“He has a long ways to go before he gets to that point,” Scott said. “But in his mind, he thinks he’s there. That’s great.”

Miami’s Dwyane Wade on Kobe Bryant: “Never count him out”