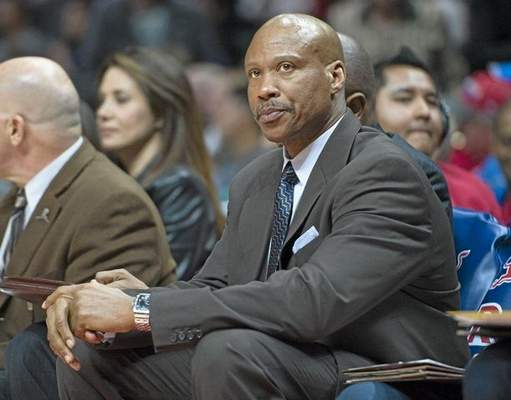 The Lakers finally felt the rare sense of victory, a 93-85 win over the Detroit Pistons on Tuesday at Staples center both ending a five-game losing streak and ensuring free tacos for everyone.

But the Lakers (17-46) still ended up losing. With the New Orleans Pelicans defeating the Brooklyn Nets on Tuesday, the Lakers were officially eliminated from the playoffs. This marked the Lakers’ earliest elimination since the franchise moved to Los Angeles before the 1960-61 season. This will also mark the second consecutive season the Lakers will not make the postseason, including the seventh time in franchise history.

“Damn. I was waiting for us to go on a 21-game winning streak,” Lakers coach Byron Scott said.

“I don’t think about that, to be honest with you,” Scott said. “I’m just thinking about the process of this team continuing to get better and just sticking with what we talked about on both ends of the floor. From day one to now, we’ve gotten better on the defensive end. That’s what I’ve been preaching all season long, so that makes me happy. We’ve got to continue to do that for the next 19 games.”

Regardless, the Lakers believe good things are on the horizon. The Lakers expect Kobe Bryant (right shoulder) and Julius Randle (right leg) to fully heal from their season-ending injuries next season. The Lakers will participate in the NBA draft lottery for the fourth time since it was introduced in 1985. The Lakers have a top-five protected pick, meaning they will only trade it to Philadelphia if it lands at sixth or worse. That arrangement stems from the Steve Nash deal with the Phoenix Suns in 2012, which the 76ers acquired at this year’s trade deadline.

The Lakers currently have the NBA’s fourth-worst record, giving them an 82.8 percent chance of retaining their first-round pick. The odds increase to 96 percent if the Lakers finish with the league’s third-worst record. The Lakers also have a first-round pick likely slated late in the round stemmed from the Jeremy Lin trade from Houston as well as two conditional second round picks.