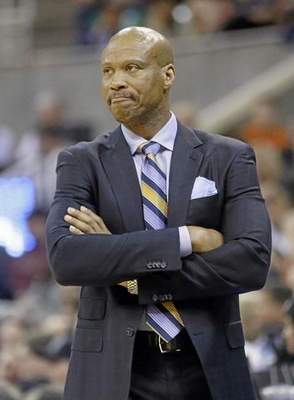 The passage of time and a visit with his grandchildren helped Lakers coach Byron Scott temper his frustration.

So when he concluded Saturday’s practice, Scott sounded in a much more jovial mood than when he offered a blistering critique of his team’s performace in the Lakers’ 101-94 loss to the New York Knicks on Thursday at Staples Center.

Scott reiterated he “wasn’t happy with that game” and argued his players showed a “lack of respect” to the Knicks because they own the NBA’s worst record. But Scott offered much more biting commentary afterwards, calling the team “soft” and saying New York coach Derek Fisher would want to play the Lakers 10 more times this season to pad the Knicks’ record. Scott has expressed similar comments in various losses this year, especially at the beginning of the season.

All of the Lakers’ players publicly agree with his sentiments, but how do they take such scoldings behind closed doors?

“I don’t think most of them want to look at me,” Scott said after Saturday’s practice. “Most of them have their heads down. I don’t think they want to make eye contact with me most of the time. I just say what’s on my mind. I say how I feel after games and I let them know.”

So much that Scott joked he deals with losses when he gets home by kicking his dog. Scott quickly backtracked, anticipating a possible blacklash from animal rights groups.

“I was joking and don’t even have a pet,” Scott said. “I love dogs. I had dogs all my life. But coaching doesn’t allow me to have one of the pets in the world. I was joking. I hope they understand that.”

In fact, Scott revealed he once bred dogs and sold them as a side-business during his 14-year NBA career. But ever since his coaching career with stops in New Jersey (2000-04), New Orleans (2004-09), Cleveland (2010-13) and Los Angeles (present), the travel-heavy scheduled convinced him he should not have any pets.

“It doesn’t fit my lifestyle right now,” Scott said. “Once I retire from this coaching thing, I’ll get back and get a puppy.”