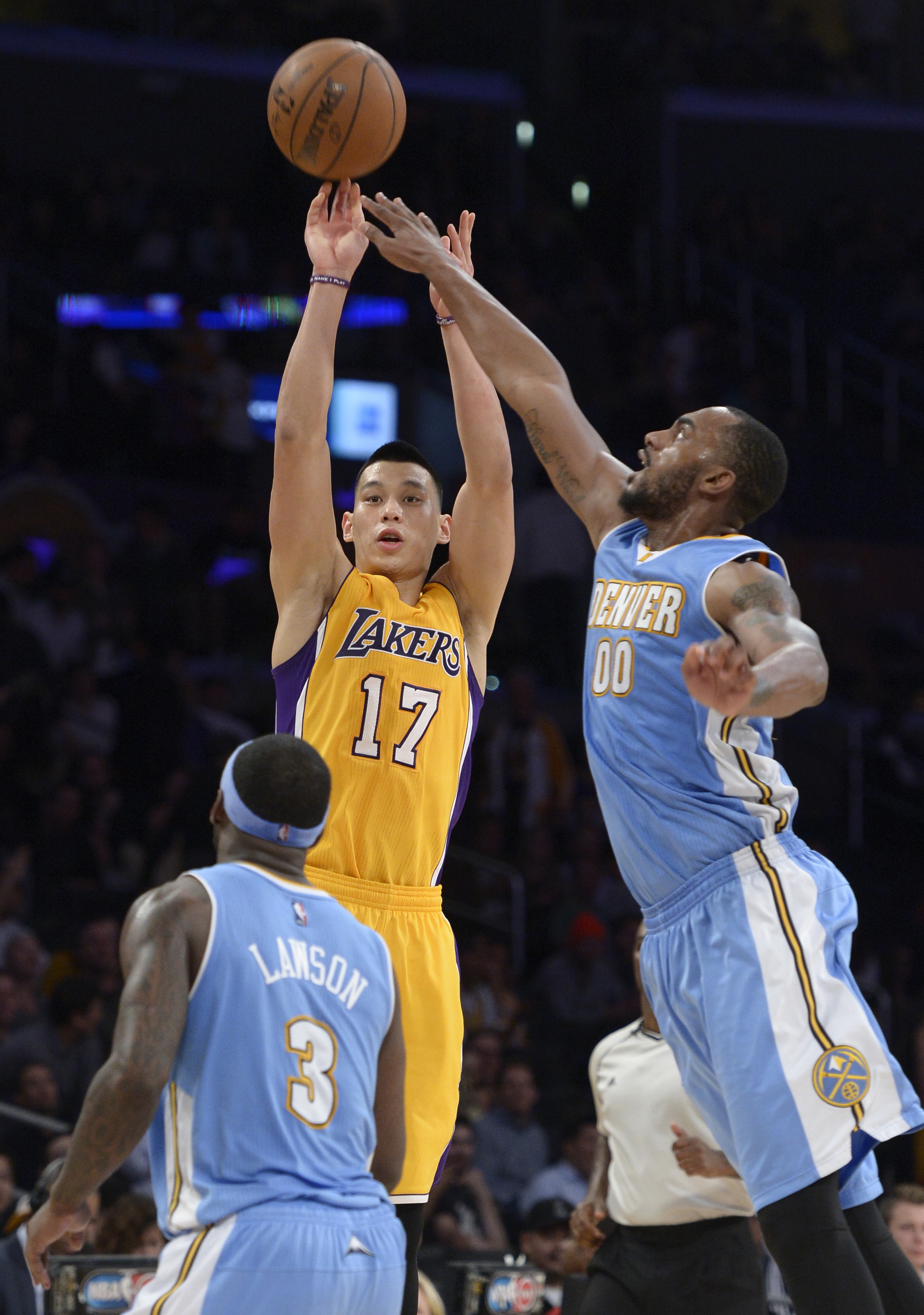 OAKLAND — He charged up and down the court, determined that his aggressive playmaking would make a positive difference.

Jeremy Lin attacked the basket. He drew frequent trips to the foul line. Lin disrupted the passing lanes. It all appeared part of Lin’s fourth-quarter charge that would lead the Lakers to a rare victory. But just when it appeared he would write that script, Lin literally dropped the ball.

He committed two costly turnovers that soon became a turning point in the Lakers’ 108-105 loss to the Golden State Warriors on Monday here at Oracle Arena. Lakers coach Byron Scott then removed Lin for the final 3:30 in favor of rookie guard Jordan Clarkson. It concluded a bitter ending for Lin after showing a promising beginning. Lin’s five turnovers overshadowed him scoring seven of his 15 points in the fourth quarter, shooting eight of 10 from the foul line, taking a key charge and collecting a steal.

Scott described Lin’s play as “okay” and credited him for “playing good solid basketball” because of his aggressiveness and defense. But then Scott focused back on Lin’s two turnovers that he called “big,” the latest example explaining why Scott believes Lin often makes bad decisions. With Lin averaging 2.2 turnovers this season and 3.2 in the past five games, how does he reduce those numbers?

“That’s a good question,” Scott said. “I don’t know how you get out of making bad decisions. All we can continue to do is point them out to him, watch film and have him just learn from those experiences in making those bad decisions.”

That film will show Lin throwing a jump pass that Warriors center Andrew Bogut intercepted. That miscue set up guard Stephen Curry delivering a behind-the-back dish to Andre Iguodala for an open layup that gave Golden State a 100-95 lead with 4:05 left. On the next possession, Warriors forward Draymond Green deflected Lin’s pass into traffic. Scott then removed Lin in favor of Clarkson, who had initially sat in the fourth quarter partly because he committed three turnovers.

“I told those guys, you’re the point guard, you have to get us into something every time. You can’t just be flip with the basketball,” Scott said. “This is one of those teams where if you try to thread the needle, there are so long and so quick, you can’t do that. You can’t make the home run play. You have to make the obvious play. That’s where we got ourselves in trouble in trying to make these home-run passes and they were off to the races.”

Lin maintained he never heard Scott offer such analysis to him.

“I haven’t talked to him about the turnovers,” Lin said of Scott. “He hasn’t given me feedback on what he wants me to do to be better.”

The answer seemed puzzling considering Lin has said this season he has talked with Scott numerous times this season about his role. Lin has admitted he found it difficult for reasons including shifting between a starter and reserve, playing in a non-traditional point guard-oriented offense and sharing ball handling duties with Kobe Bryant before he suffered a season-ending right shoulder injury after 35 games. A perplexed reporter remarked how that revelation seemed odd since Scott is the Lakers’ head coach.

“I don’t know how to respond to that question,” Lin said. “No comment.”

On his turnovers, Lin would only say that Scott “wants to keep them down.” Lin also reported that Scott “yelled at” the team regarding its 18 turnovers, most punctuated by Wesley Johnson bobbling the ball out of bounds before taking a potential game-tying three-pointer that could have forced overtime.

But Lin then revealed that he has spent more time analyzing his ball-handling issues with his personal trainer. Lin reported his trainer offered him comprehensive feedback after watching film of every single one of Lin’s 123 turnovers he committed this season leading into the NBA All-Star break. Since then, Lin has collected 23 turnovers through 13 games, marking an average of 1.7 per contest during that stretch.

What did Lin’s trainer tell him?

“Stay out of tight spots, especially when you come out of the pick-and-roll and you have the big man there,” Lin said. “Don’t try to dribble down into the block unless you know you have that space because there’s a lot of hands there and be careful of the pocket passes. Tonight I was guilty of a few of them.”

That feedback sounds fairly similar to what Scott has said publicly all season. Yet, Lin sounded somewhat defiant of his latest miscues.

He indirectly questioned one of his late-game turnovers before declining to discuss further, saying, “I don’t want to get fined.” Lin revealed he has nursed an undisclosed injury on his right wrist that he has played through for “weeks” with varying success. Lin then strongly defended what he called his “high-risk, high-reward,” play with as much passion as perhaps his emphatic block on Green.

“It’s a constant push and pull. Everything about the game is a balance,” Lin said. “I can sit there and play safe and not have any turnovers. But that means I won’t be myself as a player. I won’t be making plays that I make. I drive to the rim and to the basket really hard and put my head down. The majority of the time, I feel like something good will happen. But there will be times it won’t. To some degree, you have to live with some of those risks.”

Scott refused to live with those risks.

Lin sat out at the end of the fourth quarter for the second consecutive game, though Scott said Lin’s absence for the final minutes of Sunday’s loss to Atlanta related to an undisclosed defensive issue instead of his three turnovers.

“It’s happened multiple times and many times this year,” Lin said. “It’s not anything new. Some games I finish them. Some games, I don’t. That’s true for any player on this team. When you’re out there, you try to make the most of it. When you’re not, you try to root for your team.”

For Lin to stay on the floor, Scott will want him to reduce his turnovers. But considering Lin’s concerns on how much that will limit his playmaking, his approach may not end up with the result that both Lin and Scott want.