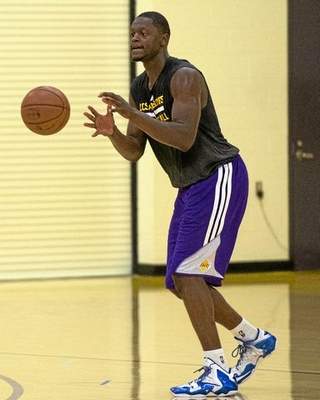 The question made Lakers forward Julius Randle initially uncomfortable. After all, he did not want to “jinx” his alma mater.

But a moment later, Randle sounded fully confident that the top-seeded University of Kentucky will keep its 34-0 undefeated record intact en route to the 2016 NCAA men’s basketball national championship.

“They’re the most talented team and best team out there,” Randle said following Wednesday’s practice at the Lakers’ facility in El Segundo. “I haven’t watched other games other than Kentucky. But from what I understand, they have the toughest bracket. I’m not worried about it.”

Kentucky will play the 16th-seeded Hampton Pirates in Louisville, K.Y. on Thursday evening before facing potential pit stops in No. 2 Kansas or No. 3 Notre Dame. But that hardly interests Lakers fans. Plenty of the attention will center on the actual prospects considering the Lakers (17-49) own the NBA’s fourth worst record and have an 82 percent chance of retaining their top-five pick. The Lakers will also have a late first-round pick from Houston stemmed from the Jeremy Lin deal.

Yet, Randle downplayed whether he watches his alma mater, wondering if any of those players could become future teammates. Such possibilities could include Kentucky forward Karl Anthony-Towns, center Willie Cauley-Stein or guards Andrew and Aaron Harrison. Some of the top NBA prospects that played for Wildcats coach John Calipari includes New Orleans forward Anthony Davis, Sacramento center DeMarcus Cousins, Phoenix guard Eric Bledsoe, Washington guard John Wall and Randle, though he played only one game this season because of a right knee injury.

After posting a nation-leading 24 double doubles in his lone season last year with the Wildcats, Randle pinpointed Calipari’s ability to develop NBA-ready talent because of how he fosters relationships with the players.

“When you put others before you and make it about the team and players, you’ll be successful,” said Randle, who often texts with Calipari. “He doesn’t have an ego. He’ll tell you what it is before you get there, that it will be the hardest thing you’ve ever done and it will be tough. But at the end of the day when you look back on it, it was worth it. He did a great job and he cares about us like we’re his own son.”

Lakers’ Jeremy Lin, Byron Scott at odds over his turnovers