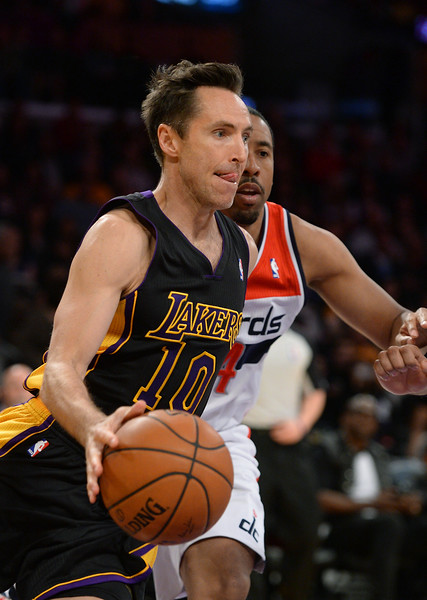 The tributes gushed out as quickly as Steve Nash could lead his team on a fast-break.

Yet, with Nash officially announcing his retirement from a storied 19-year NBA career, it also closes the chapter surrounding a dark time in the Lakers’ history.

The Lakers acquired Nash from the Phoenix Suns in 2012 in a sign-and-trade worth $28 million for three years, the team willing to trade two first and second-round draft picks for the chance at championship glory.

But Nash played in only 65 of a possible 164 regular-season games amid overlapping nerve issues with his left left, back and hamstrings, ailments that kept him out for the entire 2014-15 campaign. Nash also averaged 11.4 points and 6.4 assists through two seasons, a stark drop from his career averages of 14.4 points and 8.5 assists. Perhaps his only hightlight entailed Nash’s last assist in April, 2014 against Houston allowing him to surpass Mark Jackson on the NBA’s all-time assists list.

Yet, Scott advised Lakers fans to “take a look at everything he’s done over his career and judge him that way, not by what ended up happening here.”

So much that Scott conceded feeling “excited” over seeing images of the “old Steve Nash” in this year’s training camp. Given his Nash health in recent years, Scott envisioned his veteran point guard playing between 15 to 20 minutes per game while mentoring the team’s backcourt in Jeremy Lin, Ronnie Price and Jordan Clarkson. Instead, the Lakers ruled Nash out for the rest of the 2014-15 season after appearing in only two exhibition games.

“I’ve never seen anybody work harder. People are always down on him that he’s always hurt, but you don’t understand how hard he works just to get five minutes on the court,” Sacre said. “It’s been difficult, especially when you want to play and everyone’s calling you a coward, calling you names and all of these things. But he’s held his head up high and he knows he’s had a great career.”

The public criticism surrounding Nash goes beyond his injuries.

Nash, who made $9.7 million this season, was mostly absent from the team this season. He did not mentor Clarkson until February, 2015. Nash also did not take part in the Lakers’ team photo last week.

“He wants to play,” Sacre said. “This is what he’s known his whole life, so it’s just tough. Think about it, you want to be out there, you want to play. But It’s like seeing your friends play outside and you’re not allowed outside, you’re being grounded or something like that.”

Nash’s prolonged absence concerned some in the organization. But Lakers general manager Mitch Kupchak and Scott publicly supported Nash, while stressing they deferred to him on how he spends his time.

“When a guy decides to step away from basketball, everybody is different in dealing with it,” Scott said. “I thought he needed time to start focusing on the next phase of his life. Sometimes guys can’t be around it. It’s that much harder for him. I don’t think anybody here in the organization faults him for not being around. But we all understand, especially myself and Mitch who are ex-basketball players and have been in this business for a long time understand that guys need that peace away from the game to get their head right and figure out what they’re going to do for the rest of their lives.”

Sacre believes the “sky is the limit” for Nash’s future considering his various involvement in different projects. He currently works as the general manager for Canadia’s men’s basketball team. Nash has self-named youth camps and fitness centers all over Canada. He also oversees his film production company, Meathawk. Nash also said earlier this year he plans to stay at his Manhattan Beach residence because of his affection for the city and lifestyle and proximity to his children.

“He brought the small man back into the game,” Scott said. “He was able to dominate the game with his passing ability and his unselfishness. There are a lot of guards in this league today that looked up to Steve with the way he played the game and the way he approached it.”

So much that Scott pinpointed Nash as the sole player he would mix his defensive coverages on each quarter to keep him guessing. Scott also found Nash boasting similar traits as Magic Johnson, who won five NBA championships with the Showtime Lakers.

“They’re both true point guards that wanted to get their teammates better shots,” Scott said. “They wanted to do everything they could to make them better basketball players.”

Nash has lately worked with Clarkson to make him a better basketball player. For the past two months, Nash has mentored him in informal workouts that Clarkson said has varied from breaking down film, learning the pocket pass and improving his pace. Clarkson also revealed Nash plans to work out with him sometime when the Lakers return from their upcoming eight-day, five-game trip on March 31.

“It meant a lot man for him to reach out and open his arms and work with me,” Clarkson said. “It’s been great for my development and my process. So I really thank him for that and hope to continue to work with him.”

If only the Lakers could thank him for something more, leaving the franchise eulogizing Nash’s career while hoping such success could have taken place with him wearing a purple and gold uniform.

“A tremendous person, extremely humble and grateful and one of those guys you love to be around,” Scott said. “He was just a tremendous guy. I wish I had the opportunity to spend more time with him and coach him for a few more years. But that obviously didn’t happen. But as a person or a basketball player, there’s nobody better.”