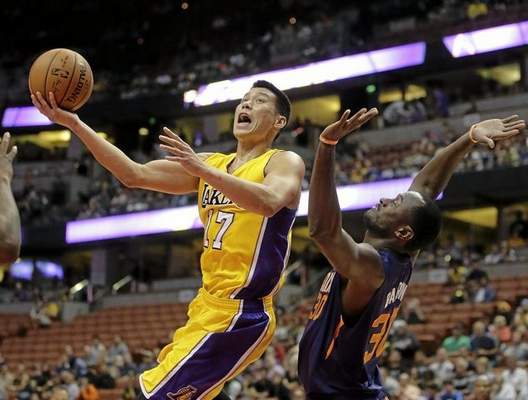 Jeremy Lin will assume his backup point guard role when the Lakers (45-25) host the Philadelphia 76ers (17-52) on Sunday at Staples Center after nursing back spasms in recent days. But Lakers coach Byron Scott said Lin went through Sunday’s morning shootaround without any issues.

Lin reported that his back went out of alignment after colliding into an unnamed teammate last Wednesday in practice, leading to endless treatment moments before the Lakers’ loss last Thursday to Utah. Lin only finished with two points on 1-of-8 shooting and two turnovers, but he impressed the Lakers with three steals, four assists and plenty of hustle and toughness throughout the game.

Lin’s workload in Friday’s practice stayed confined to stationary shooting. Lin then completed all of Saturday’s practice. That concluded with a series of sprints for the Lakers’ reserves, including Lin, because they lost in a scrimmage.