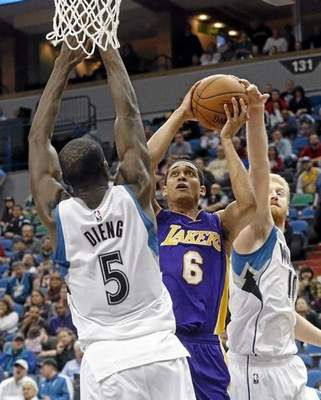 MINNEAPOLIS — This forgettable game appeared on the verge of continuing, a horrible proposition for both the Lakers, Timberwolves and any basketball fan willing to watch.

Yet, here the Lakers and Timberwolves stood, two NBA lottery bound teams that proved nearly equally effective in squandering late-game opportunities and failing to win. It appeared that ugly trend would persist when Lakers guard Wayne Ellington missed a contested layup mere moments before it appeared the game would go into double overtime. But then Lakers guard Jordan Clarkson rebounded the ball, attempted a putback and drew a foul on Minnesota guard and former UCLA standout Zach LaVine on a call that later became highly disputed.

Clarkson then calmly approached the foul line. He sank both shots with .03 seconds remaining. Finally the game ended, the Lakers securing 101-99 overtime victory over the Minnesota Timberwolves on Wednesday at Target Center. Yet, Clarkson hardly sounded happy afterwards. And no, the reasons had nothing to do with the Lakers (19-51) hurting their NBA lottery chances with a 3 1/2 game lead over Minnesota (16-55) and two-game cushion over Philadelphia (18-54).

“I think I took a few steps back,” said Clarkson, aware that he scored a team-leading 20 points on only 6-of-16 shooting and committed six turnovers. “I didn’t take care of the ball well. I was holding it a little bit too much on the offensive end. I have to keep growing, watch the film and learn from it.”

Clarkson may have shot only 1-of-7 from the field in the fourth quarter. Clarkson may have committed two turnovers on consecutive possessions in overtime, including a poor pass and a traveling violation. But then Pressey delivered a timely message.

“I pulled him to the side and said, ‘That’s okay,'” Pressey said. “The game is made of mistakes. But it’s what you do afterwards.'”

From then on, Clarkson stayed aggressive. He attacked the basket, drew a foul on Lorenzo Brown and canned two foul shots to tie the game at 97-97 with 1:09 left in overtime. On the next possession, Clarkson finished with a finger roll that gave the Lakers a 99-97 lead with 44.8 seconds left. Moments later, Clarkson rebounded Ellington’s miss and went to the foul line to secure the win. Afterwards, Pressey gushed about Clarkson reaching “another growth spot.”

“I thought he did a good job of staying engaged,” Pressey said. “It wasn’t so much offensively. That can be both sides when you screw something up or you go on the other end and put your head down. All of a sudden, you’re into defending the right way. It’s a credit to him.”

“You always want to grow and to be able to finish games,” Clarkson said. “That’s one of those things where you have to learn and just compete to the end.”