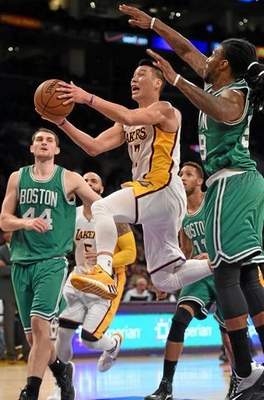 BROOKLYN — Lakers guard Jeremy Lin will sit out of today’s game against the Brooklyn Nets at Barclasy Center because of an upper respiratory infection that has worsened in recent days.

Lin went through all of Saturday’s practice and maintained he could play despite looking visibly distraught. Lin’s voice also sounded soft. Yet, Lin has averaged 21.5 points and 5.5 assists in the past four games since nursing the illness. Lakers guard Wayne Ellington will start in Lin’s place, while starting point guard Jordan Clarkson and backup guard Jabari Brown will see more playing time. As for Lin, Scott believes he will recover in time to play on Monday in Philadelphia.

“I thought he played well despite going through the illness he went through,” Scott said of Lin. “He was able to fight through it and put up some pretty good numbers on the offensive end. He did some good things for us on the defensive end. Even with those last couple of games dealing with it, I thought he was pretty effective.”

Scott also plans to play Jordan Hill for the first time in three games over Ed Davis. Scott will still sit Carlos Boozer for rest purposes and to rest recover from an upper respiratory infection.