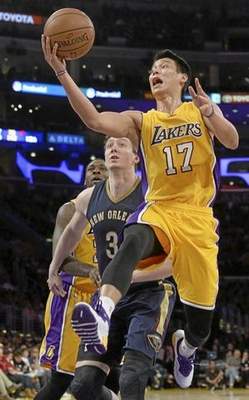 Lakers guard Jeremy Lin missed Saturday’s practice so he could receive treatment to heal persistent soreness in his left knee. Lin has missed the past two games because of his latest injury, and a recent MRI confirmed an abnormality in his meniscus that has existed since having surgery in 2012.

The Lakers (21-58) have not ruled out Lin playing for Sunday’s game against the Dallas Mavericks (48-31) at Staples Center. After practice ended, Lin emerged on the court and completed some dribbling and shooting drills drills with Lakers player development coach Thomas Scott.

“He’s getting better,” Lakers coach Byron Scott said of Lin. “He went through his treatment. We’ll just see how he feels tomorrow in shootaround.”