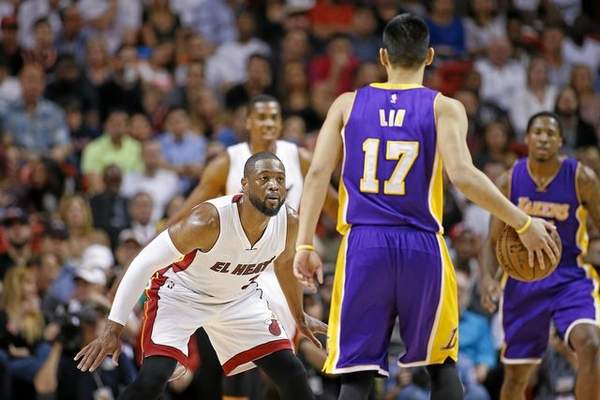 Miami Heat’s Dwyane Wade (3) defends against Los Angeles Lakers’ Jeremy Lin (17) as he brings the ball up court during the second half of an NBA basketball game in Miami, Wednesday, March 4, 2015. The Heat defeated the Lakers 100-94. (AP Photo/Joel Auerbach)

The philosophical differences between Lakers guard Jeremy Lin and coach Byron Scott ran deep, the two figures rarely agreeing much on anything regarding basketball.

Lin admitted “it hurt” he lost his starting role only 19 games into the season, while Scott saw it as a necessity to jumpstart the Lakers’ eventually lost season. Lin believed his play enhanced through pick-and-roll sets, while Scott believed that just inhibited ball movement. Lina argued his inconsistency stemmed from a lack of floor spacing, while Scott pointed the problem to his decision making.

Yet, Lin sensed he experienced “good progression and improvement through the course of the year,” both with his play and his relationship with Scott. So much that Lin he remains open toward re-signing with the Lakers once he becomes an unrestricted free agent in July.

“That’s definitely an option for me to consider,” Lin said. “I’m here. I love the city. I love the fans. I’m comfortable. I would definitely consider it for sure if that’s an option.”

The Lakers feel skeptical about re-signing Lin amid his discomfort under Scott’s system. The Lakers will also prioritize their roster needs through the NBA draft on June 25 and pursuing marquee stars once free agency begins on July 1. Meanwhile, Lin shared that he feels less consumed with the size and length of his contract after making $14.9 million last season. Instead, Lin remains more concerned with the on-court implications.

“I want to find a good place and hopefully the best place I can fit in at,” said Lin, who will turn 27 in late August. “I’ll be going into the physical prime of an athlete. I feel like I want to be able to find a good fit for me and find the best I can wherever that is.”

Lin did not initially experience his best, averaging 10.2 points on 42.6 percent shooting, 4.6 assists and 2.7 turnovers in 25.5 minutes per game in 57 games before NBA All-Star break in late February. His point total represented his lowest output since “Linsanity” happened in New York three years ago. His shooting percentage marked the worst he experienced since his rookie season in Golden State five years ago. His play seemed mixed considering his three-point shooting (37.4 percent), assists and turnovers all represented career-highs.

But in 22 games after the All-Star break, Lin increased his scoring average to 13.2 while maintaining similar pre All-Star break numbers in his shooting percentage, assists and turnovers. Lin credited the improvement to a combination of things. The Lakers played more pick-and-roll and featured smaller lineups that helped floor spacing. Lin felt relaxed during the All-Star break and stopped overthinking. Lin better understood Scott’s offense that puts more emphasis on post-ups and dribble handoffs.

“His respect for me and my respect for him has grown steadily throughout the course of the season,” Lin said of Scott. “It’s evident by him and his standpoint, where it’s him playing me more, giving me more minutes or putting me back in the starting lineup. Running specific plays to get me going shows he’s growing in how he receives me as a player. For me it was understanding what he wants and figuring out this is his style and this is what he expects from me as a point guard and the changes I need to make.”

That included Lin pointing some of the blame on himself on not immediately adapting to Scott’s system.

“That’s on me. That’s my next challenge. That’s what I want to take and face on this summer,” Lin said. “There is so much more to learn. This is my third year in a different system. I know it. I’ve seen it. I’ve come off the bench. I’ve started. I’ve not played at all and played almost every minute of a game. I’ve had a wide array of experiences and I want to make sure I can evolve my game to be someone who is not contingent on anything except for me impacting the game. That’s my goal. It’s an exciting challenge and I’m looking forward to it.”

Scott’s respect for Lin grew in other ways, too.

Scott recently praised Lin for taking his honest critiques in stride, something the Lakers’ guard partly attributed to his upbringing when his parents scolded him when he received an A- on his report card. Scott also credited Lin for playing through numerous ailments that included an upper respiratory infection and back spasms.

“He saw some of the stuff I played through I had no business playing through,” said Lin, who said he will not need surgery on his sore left knee that has kept him sidelined for the past week. “Toughness is not about how loud you verbally talk. Toughness is showing up every day and doing your work. Toughness is sacrificing for the team and still giving your best effort and finding a way to get it done and improve. I thought those were things I did throughout the course of the season.”

Lin also spent plenty of time relishing Kobe Bryant’s mentorship. Lin recalled that he and Bryant often watched film together. Lin also shared how Bryant had a towel draped over his head at halftime following a rough start, only to return in the second half and “just exploded” because of his strong mental preparation.

“I’ll take all of that with me whether I come back or not during the summer,” Lin said. “I’ll take what he’s done and how he approaches the game and be able to apply that to me specifically.”

Incidentally, the passion of Bryant’s fanbase also applies to Lin’s. Both react strongly pertaining to any positive or negative article written about them.

“My true fans are with me until I die. I know that, love that and appreciate that. I’m so grateful for that,” Lin said. “They’re the best. They might annoy other people. But they’re rooting for me so I’m not going to complain.”

Nor will Lin complain about this failed season or his role that provided plenty of frustrations. Instead, he reflected back on his time with the Lakers with some nostalgia, appreciative of the growing pains he experienced and open toward continuing the journey.

“I’m not ruling anything out,” Lin said. “I don’t know where I’m going to be next year. But never say never. I would definitely keep this open. It’s not like this is a last resort.”