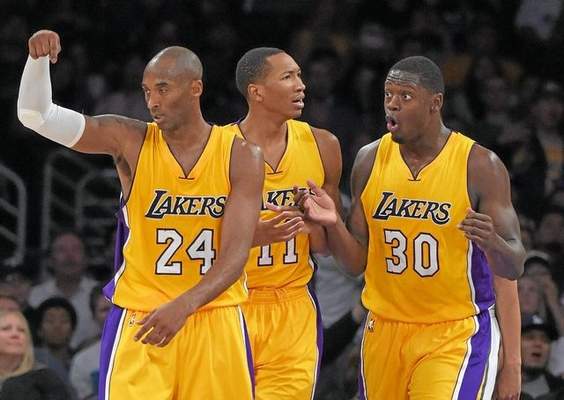 Los Angeles Lakers guard Kobe Bryant, left, gestures to count a basket as forward Wesley Johnson, center, and forward Julius Randle react as referees nullify it during the second half of a preseason NBA basketball game against the Utah Jazz, Sunday, Oct. 19, 2014, in Los Angeles. The Lakers on 98-91. (AP Photo/Mark J. Terrill)

The raw emotions hit him hard, Lakers forward Julius Randle sobbing in both pain and disappointment over suffering a season-ending right leg injury in his first NBA game.

“‘My recovery starts at that moment,’” Randle recalled Bryant saying in late October, 2014. “From then on, he checked on me every day and every week and made sure my head was in the right place and made sure I’m getting ready for next year.”

After his exit meeting on Tuesday with Lakers coach Byron Scott and general manager Mitch Kupchak, Randle reported he remains well on his way toward accomplishing that goal.

Randle reported feeling “no pain” in his surgically repaired right tibia. He said he has lost an unspecified amount of weight to ensure strong conditioning. And Randle estimated he is “not too far” into receiving medical clearance to participate in contact drills.

But Randle urged caution on the strong possibility he could recover fully to play on the Lakers’ summer league team in July in Las Vegas.

“The plan is to be ready for training camp,” Randle said. “The short-term goal of summer league, that’s what I want to plan. But we have to work to that.”

Randle largely credited Bryant during his recovery for ensuring that he stayed confident and focused throughout his recovery. Randle declined to watch the replay of his injury once he started rehab. Randle also consulted with Indiana forward Paul George, who has recently returned to the court after fracturing his right leg last summer with the U.S. national team. The conversations ranged from just seeking encouragement to asking George questions about rehab, such as how to run with a bone callus.

Randle also feels encouraged about his own recovery, calling himself a “strong-minded person.”

But he found it useful to hear from Bryant on how he handled self-doubt surrounding his injuries, which currently entails rehabbing from a surgically repaired right shoulder that Lakers believe will fully heal by training camp. Randle also embraced Bryant’s instruction to embrace the chance to watch games closely on film and on the sideline to gain another perspective on the game. It helped Randle’s psyche that he said he has experienced zero setbacks.

“When you see the improvement,” Randle said, “it’s easy in those moments of self doubt to reflect on those things and have that confidence to keep pushing.”

Jeremy Lin open to returning to Lakers despite initial struggles