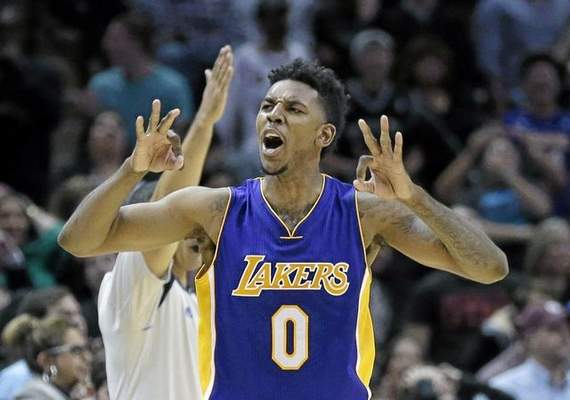 A swirl of negativity surrounded Nick Young involving seemingly everything. His poor shooting numbers. His persistent injuries. His commitment. His love for the cameras. His post-game celebration over a rare victory against Boston that sparked scorn from Lakers star Kobe Bryant and Lakers coach Byron Scott.

Yet, Young still maintained he feels “confident” he will return next season still wearing a Lakers uniform.

“I’m confident in everything,” Young said. “Whatever happens, happens. It’s meant to happen.”

If the Lakers have their wish, this will mark the end of the so-called “Swaggy P” era. With Young averaging 13.4 points on a career-low 36 percent shooting and having occasional clashes with Scott, the Lakers will entertain trade offers for him, according to a team official familiar with the front office’s thinking. Still, complications could emerge in trading Young, who still remains under contract for three more years at $16.33 million. Young’s poor play could sour his value as well as the Lakers’ reluctance to attach any draft picks just to expend him.

Yet, Young stressed that “me and coach are cool” before adding “we’re on the same page.” That marks a sharp contrast to when Young told L.A. News Group two weeks ago that he takes Scott’s criticism with “a grain of salt” and he considers the feedback “a little unfair.”

The most obvious area involves Young improving his poor shooting.

“I blame it on the rim,” Young joked. “The rim was tripping this year. Next year, I’m going to take her on a date and treat her a little better.”

Young reported that Scott offered more practical solutions. He wants Young to score more on catch-and-shoot opportunities instead of relying on too much one-on-one play. Scott also believes Young needs to react to double teams better by passing more and avoiding contested shots. In recent weeks, Scott has also said he hopes Young improves both his defense and overall work habits.

Yet, Young’s offseason regiment will stay on hold for two reasons. Young said the fracture in his left kneecap still remains “in the healing process” after missing the previous 26 games. Young also added that he plans “to get away from basketball” and that “I’m trying to clear my head.”

“I’ll be in Maui if ya’ll need me,” Young said to reporters at the end of his interview.

That playfulness partly explains why Young has received heightened criticism.

“It’s just me. It’s nothing I’m putting on or showing off for the cameras. This is how I’ve been my whole life,” Young said. “This year has been one of the years when everything we did or I did was under a microscope. It’s something to learn from. I’ll be all right.”

That scrutiny increased when Young, Jordan Hill and Carlos Boozer crashed Jeremy Lin’s post-game interview on Feb. 22, expressing elation over a rare victory against the hated Boston Celtics. The footage aired on Jimmy Kimmel Live when Bryant appeared as a guest, his silent and dismissive reaction increasing the criticism on Young even more.

“He hasn’t said nothing negative to me in general or talked to me in general about things,” Young said of Bryant. “Me and Kobe go back and forth, jawing a lot and talking trash. At the end of the day, it’s about basketball. He respects that part of me.”

But how does Young earn Scott’s full respect?

“He said, ‘Don’t feed into whats going on around me and focus on the basketball part,'” Young said. “Anything that’s been said, he’ll tell me directly. Focus on basketball and what got you here. Everything else will take place.'”

Whether that means Young will still wear a purple and gold uniform remains uncertain. But Young vowed he will put in the work to prove he still deserves to have one.

“I’ve been prepared for everything,” Young said. “I just roll with the punches and keep doing what got me here.”

Who stays, who goes? A look at the Lakers roster