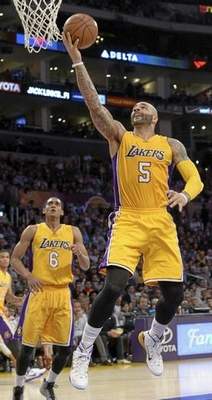 Amid a demoted role and even occasional benchings, Lakers forward Carlos Boozer mostly stayed silent during his frustrating 2014-15 season.

Boozer had plenty to say after his exit meetings on Thursday with Lakers coach Byron Scott and general manager Mitch Kupchak. But they went beyond any frustrations surrounding his season.

“I told Byron and Mitch if they have a team that could compete, I’d love to come back,” said Boozer, who will become an unrestricted free agent on July 1. “It’s tough to come back to a situation like this where we’re 21-61 at this part of my career. I still want to win one championship when I retire. If we have a chance to compete in the playoffs for a championship, I’d love to be a Laker.”

The Lakers do not have much interest in retaining Boozer, whose 11.9 points and 6.8 rebounds per-game average represented his lowest marks since his rookie year in the 2002-03 season.

Although the Lakers initially acquired him because of his veteran presence, the Lakers showed more investment toward their younger players at the tail end of the season. The Lakers issued more playing time to Ed Davis, Tarik Black and Robert Sacre, while Boozer sat in 10 of the last 14 games because of a coach’s decision. Meanwhile, the Lakers expect forward Julius Randle to fully recover by training camp from a fractured right leg he suffered in the team’s season opener.

Yet, Boozer said he does not put much priority in signing with teams that could promise a starting role.

“Very little. I knew at some point in my career, I would have to transition into being a starter into an off-the-bench guy,” Boozer said. “To be honest, there were moments I thrived in that 6th and 7th man role coming off the bench with Swaggy P. I kind of enjoyed it a little bit.”

Boozer hardly shared those sentiments after Scott demoted him after 19 games. Yet, Boozer largely credited Scott this season for fostering “a winning environment” ranging from forcing players to win after they lose in a scrimmage or make lineup changes with conviction.

Boozer also embraced the Lakers’ youth movement. He predicted that Randle, Clarkson, Black and Jabari Brown all will have “great futures.” He also considered Clarkson a “mini Westbrook” and argued he was “the steal of the draft,” after the Lakers paid Washington $1.8 million to secure his him with the 46th pick.

“I’m a very team bonding guy. I go bowling, watch movies and eat dinners,” Boozer said. “We’ve been successful that way and the same time I liked this guys growing in the NBA, I try to give them tidbits on how the can stay in the league a long time.”

But nothing went according to plan. Boozer believed the Lakers could have made the playoffs as a sixth, seventh or eighth seed had they not suffered key season-ending injuries to Kobe Bryant (right shoulder), Steve Nash (back) and Randle (right leg). Hence, Boozer wants to see how the Lakers fare in their rebuilding project.

“We’ll wait to see how the draft pick goes and what other players want to come with us and hope to get the organization back to playoffs, championships and hanging up banners,” Boozer said. “We’ll see what the organization plan is and go from there.”