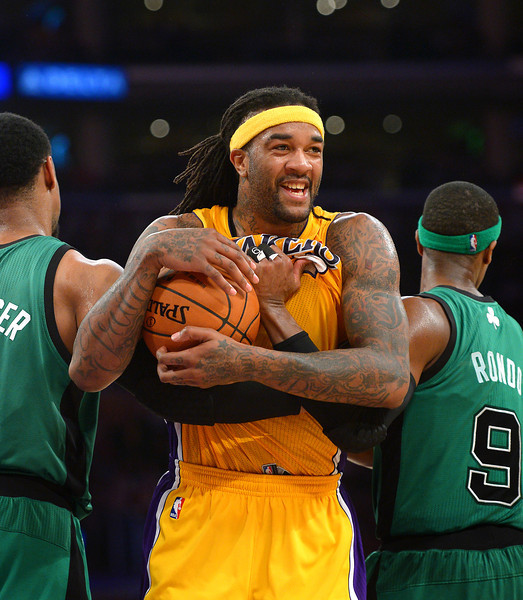 The Lakers’ Jordan Hill is probable for Thursday’s game against the Cleveland Cavaliers after hyperextending his knee Tuesday against Miami. (Photo by Michael Owen Baker/L.A. Daily News)

Once he became the Lakers’ coach this past season, Scott afforded Hill those opportunities. But despite Hill posting career-highs in points (12), rebounds (7.9), starts (57) and minutes (26.8) in the Lakers’ 21-61 2014-15 season, his exit interview last week featured Scott focusing more on what Hill lacked.

“He was disappointed he didn’t see that energy,” Hill said. “That’s something else I need to work on.”

That marks one of many reasons why the Lakers feel unsure if they will exercise his $9 million team option before June 30. Just like how it has become with any player on their roster, the Lakers are placing more priority on the NBA Draft on June 25 and the marquee stars once free agency begins on July 1.

“It’s going to be a big offseason for the Lakers,” Hill said. “It’s up in the air right now. They don’t know what’s going to happen. I have to stay positive and hope everything will fall into plan.”

Not everything went according to plan for Hill.

“The first month, I was showing the energy,” Hill said. “But it was the first time having all these minutes on my hands. I started feeling myself going down and feeling fatigued. It wasn’t something I was used to. I just decided to pace myself a little bit more. That’s where the energy started to slide off a little bit.”

Scott has said Hill needs to improve his training regiment, though he declined to outline specifics out of uncertainty surrounding Hill’s training habits. Hill admitted he needs improvement in “just trying to take care of my body,” including cutting down on junk food and increasing his training workload. But amid his pledge he had given up alcohol the past year, accounts suggest Hill has also struggled with that change.

Yet, Hill sounded somewhat defiant he will still look to expand his game, including “hopefully to the three-point line next year.” He also downplayed any concerns on if his shaky play hurts his future with the Lakers after spending the past 3 1/2 seasons of a seven-year career here.

Part of Hill’s future goes beyond his own play.

If the Lakers land within the top five in the NBA lottery on May 19, Hill’s future could hinge on if their order is high enough to draft a talented big man, such as Duke’s Jahlil Okafor or Kentucky’s Karl Anthony Towns. If not, the Lakers would have to weigh the cost-benefit of Hill’s presence.

If they waive him, the Lakers will have an extra $24 million instead of $15 million in cap room to pursue a big man in free agency, including Memphis’ Marc Gasol, Portland’s LaMarcus Aldridge, Cleveland’s Kevin Love or the Clippers’ DeAndre Jordan. But that comes with the risk of the Lakers losing a decent role player.

The Lakers are assured of keeping Hill either by exercising his team option or declining it to renegotiate a new deal once he becomes a free agent. But that leaves the Lakers vulnerable of losing Hill without receiving anything in return.

“At some point,” Lakers general manager Mitch Kupchak said, “we’ll have to make an educated decision there on what to do.”

All of which Hill believes leaves him at an advantage. Kind of.

“That will help a lot, but anything can happen,” Hill said. “I’d love to come back here. But I understand and everybody understands it’s a business, especially for a franchise like the Lakers. It’s been up and down the past couple of years. It’s something new to a lot of people. So they’re just trying to get this organization back on track.”

Hill also pledges he will get back on track, aware that his increased production and playing time this season did not correlate with substantial growth everywhere else.