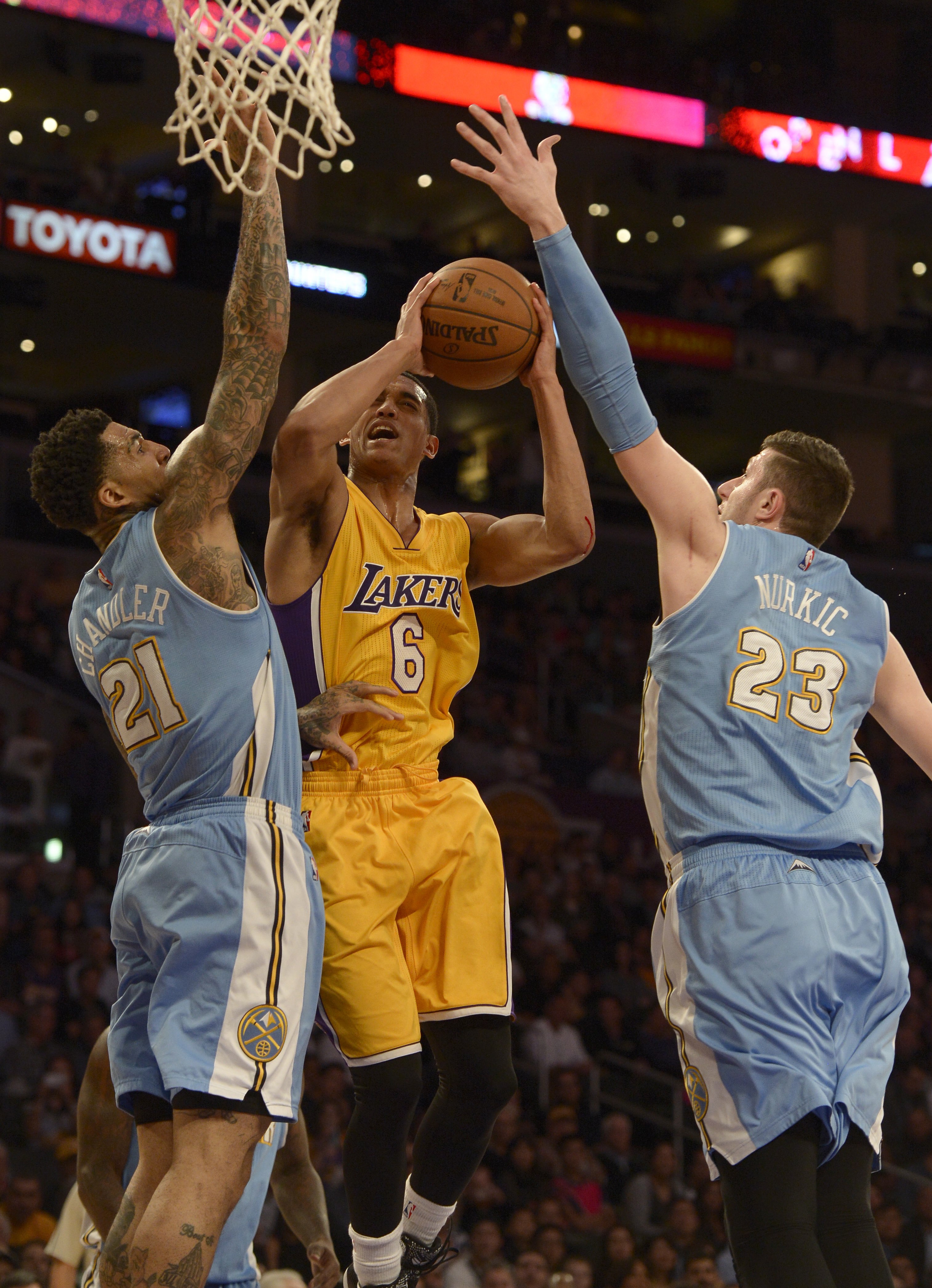 Through both the good and the bad, Lakers rookie point guard Jordan Clarkson remains restless.

Clarkson’s memories have stayed fresh regarding his uncomfortable feeling when he waited for NBA Commissioner Adam Silver to call his name during the 2014 NBA Draft, only to sit through an entire first round without that confirmation. In fact, Clarkson did not hear his name called until the 46th pick, which the Lakers bought from the Washington Wizards for $1.8 million. So as he experienced a rookie season that morphed from seldom-used reserve to a definitive starter, Clarkson watched last year’s draft between eight to 10 times to further remind himself of what drives him.

“It’s just kind of one of those things that keeps me hungry,” Clarkson said after last week’s exit meetings. “When I have a bad game, I watch the film and just kind of remember everything. I try not to put two bad games together. It’s kind of what gets me over the hump.”

Clarkson ended his rookie season averaging a team-leading 15.8 points per game on 45.8 percent shooting, five assists and 4.2 rebounds. Even when accounting for Clarkson sitting out 23 of the Lakers’ first 43 games, his season-long averages still finished high in his rookie class. He ranked second in scoring average (11.9 points per game), third in assists (3.6), third in free-throw percentage (82.9) and fourth in field-goal percentage (44.8).

That prompted Lakers Byron Scott to declare publicly the Lakers will retain Clarkson, who has a non-guaranteed contract for the 2015-16 season worth $845,059. Lakers forward Carlos Boozer also likened Clarkson to a “little baby Westbrook,” called him “the steal of the draft” and told him he would pay to take his kids see him play within three to four years after he retires.

“To Jordan’s credit from day one,” Lakers general manager Mitch Kupchak said, “he embraced the opportunity and got better and better as the season went on.”

But as the Lakers enter a busy offseason, how will Clarkson’s emergence affect how the franchise fills their seemingly infinite amount of roster needs?

Presuming the Lakers retain their top-five protected pick in this year’s draft, will they target another point guard such as Ohio State’s D’Angelo Russell or China’s Emmanuel Mudiay? Or will the Lakers receive a high enough enough that they will focus on bolstering their frontcourt (Duke’s Jahlil Okafor, Kentucky’s Karl-Anthony Towns) or wings (Duke’s Justise Winslow, Arizona’s Stanley Johnson)?

Should the Lakers not upgrade their backcourt through the NBA Draft, will they try to fulfill those holes through free agency? Rajon Rondo should become available considering his arrival with Dallas in a mid-season trade from Boston ended issues that included disagreements with Dallas coach Rick Carlisle and a back injury. But even if Rondo remains one of the NBA’s most gifted passers and remains close to Kobe Bryant, is Rondo worth the risk for reasons including his personality, health and poor shooting accuracy? Goran Dragic has said he will test the free agent market and consider the Lakers. But the sense is that he will not leave Miami for reasons including his positive outlook on the roster and the team’s ability to offer a fifth year instead of the four years he will have from other teams.

But unlike how he views the 2014 NBA Draft order, Clarkson hardly seemed offended that the Lakers may upgrade the backcourt around him.

“I want to better myself every day,” Clarkson said. “In terms of getting players and guys, you definitely want to play with guys that are good and that can compete. That’s why I don’t have any worries. I want to be around winners and guys that want to go out there and get it.”

Regardless of how the Lakers upgrade their roster, Clarkson has a pretty extensive offseason to-do list after meeting last week with Scott and Kupchak that will prepare him for any scenario.

“I don’t want to put limitations on him,” Scott said. “I want him to grow in every area.”

But a few areas stood out.

The Lakers want Clarkson to build on his skills as a scorer by still fine-tuning his speed and becoming more aware as a passer. They would like him to work more off-the-ball both so he can defend scorers and run the offense without the ball in his hands. They asked Clarkson to add more muscle to his listed 6’5, 185-pound frame. The Lakers also suggested Clarkson to grow as a leader, an idea Clarkson said will mostly entail studying Clippers guard Chris Paul.

“He gets his point across. He still gets everybody involved. He makes everybody happy around him. But he still has that presence of control and demand from his teammates,” Clarkson said of Paul. “It’s one of those things that you’ve got to have in you. I feel like I’m a capable leader, but I just need to step into that role and just take it.”

Clarkson showed that at times in his rookie season even if he played with much older veterans.

As the number of starting appearances added up, Clarkson increasingly directed teammates both where to set picks and rotate. He even chewed out teammates, most notably Jordan Hill, over missed defensive assignments. Scott reported that Clarkson also harped on other teammates when their effort lagged.

“It just comes out of me because I want to win,” Clarkson said. “I feel like that’s kind of the next step in terms of me growing as a player and leadership and speaking up – not only speaking up when something bad happens, but being able to talk throughout the whole game and encourage my teammates and do a lot of talking.”

In his rookie season, Clarkson mostly relied on his game to do most of the talking.

He joined the Lakers with modest expectations, aware that a backcourt featuring Steve Nash, Jeremy Lin and Ronnie Price meant Clarkson would spend most of the time sitting on the bench. But he spent those moments intently observing the game, noting the right times to attack the basket, shoot or pass. Team accounts raved about how Clarkson stayed disciplined with his even-keel demeanor, workouts and post-practice routines amid the string of DNP’s. Clarkson also joked Lakers development coach Thomas Scott became a casualty to his never-ending work.

“He was always pushing me throughout the whole year, just trying to find new ways to get me better and keep me engaged,” Clarkson said of Thomas Scott. “A lot of one-on-one battles with him. He had a knee injury and an ankle injury early on in the year. He doesn’t want to say it was from my one-on-ones, but I kind of put it on him a little bit this year.”

So once Bryant suffered a season-ending right shoulder injury on Jan. 21, Scott did not hesitate to throw Clarkson into the starting lineup in the very next game, which incidentally took place in his San Antonio hometown. Clarkson’s 11 points on 5-of-9 shooting, four assists and one turnover in his starting debut marked just the beginning.

In his last 12 games, Clarkson posted at least 20 points seven times. He scored a career-high 30 points against Oklahoma City’s Russell Westbrook. Clarkson made two free throws that secured a win in Minnesota as well as a layup that clinched a victory in Philadephia. He eventually won NBA Western Conference Rookie of the month honors for his performances in March, marking the first Lakers rookie ever to win the award since it was first presented in the 1981-82 season.

Through it all, Clarkson listened closely to Kobe Bryant, whom the Lakers rookie gushed his star teammate views the game “like a math problem.” Clarkson also worked out frequently with Steve Nash, who directed him how to make better pocket passes, maximize floor spacing and play at the right pace.

“I just listened. Don’t say nothing. I just tried to take what they said and put it on the court and in the game,” Clarkson said of Bryant and Nash. “It was just part of my learning process. But in terms of processing it, I never looked at them like, ‘Oh, man, this is Kobe and this is Steve.’ I looked at them like, ‘These are my teammates and I appreciate them helping me through this time.’”

Clarkson also expressed plenty of appreciation for Scott, though Clarkson joked both to Scott and Kupchak he would not have had a significant role if not for injuries to Bryant and Nahs.

“I just want to thank coach just for giving me the opportunity, coming out on the limb and just throwing me into the fire,” Clarkson said. “Just giving me the opportunity to play and develop. He spends a lot of time with me. He’s always talking and stuff with me. I’m not sure if many coaches around the league do that, but I feel like he’s big part of the process of my growing as a player and as a person. It’s been great to be around him.”

It sounds like Clarkson will be around Scott more.

He plans to spend most of his offseason in Los Angeles training. Clarkson will also play on this year’s Summer League team. And of course, Clarkson will rewatch the NBA Draft, providing another reminder why he will maintain his extensive work ethic.

But as he waits yet again for Silver to announce his name, Clarkson will understand why the delay happened. His play dropped off in the second half of his junior season at University of Missouri after he learned his father was diagnosed with a rare form of cancer in his lower back, an ailment he has since overcome.

And regardless of where Clarkson’s role rests next season on the Lakers, he will still maintain that outlook while striving to win over a franchise that currently feels optimistic about his long-term potential.