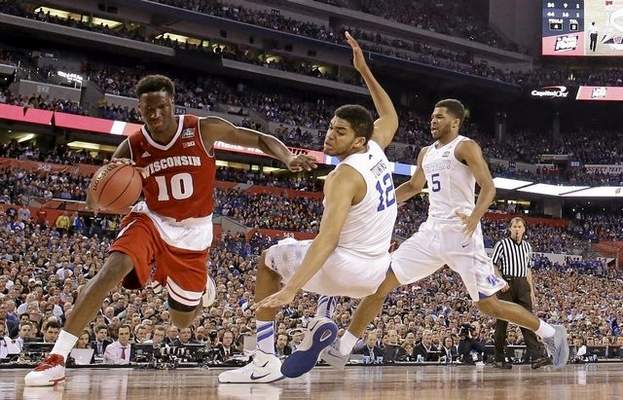 Below is the second part of a occasional series with NBA analysts providing their take on the Lakers’ needs heading into the 2015 NBA Draft on June 25. Below is a recent interview with NBA TV analyst Stu Jackson, who helped with the network’s Draft Combine coverage from Chicago earlier this week, including talking to prospects on site.

Knowing the Lakers’ needs, who would you take if they land the No. 1 pick?

Jackson: “I think the four premier players in the draft are Karl Anthony-Towns, Jahlil Okafor, Emmanuel Mudiay and D’Angelo Russell. I think with both of those you have two premier big guys and two premier guards that I would consider All-Star potential.”

So why Anthony-Towns over Okafor?

Jackson: “Karl Anthony-Towns is a little bit taller and longer. He developed his game from the outside in. This guy at a young age started out shooting the ball from the perimeter. It’s only as of late last year in high school and this year at Kentucky where his low post game started to develop. That’s a positive in that his upside is very large. He has the potential both to be an outside and inside player. Also, with Towns, more so than Okafor, he’s got slightly quicker feet and much more speed. When you’re talking about a big that can go out on the perimeter and defend NBA pick-and-rolls, I think that Towns is going to be a little bit more adept at doing that than Okafor.

Now on the flipside, Okafor, the guy has huge hands and soft hands. He catches things like a vacuum. I think he is a far superior low post player at this point. From a low-post standpoint, he’s NBA ready, I think when you put him on the floor. He’s going to score. In terms of their passing ability, I would give the slight edge to Towns. But Okafor is not by any means a bad passer. He can pass out of a double team himself. He’s got some passing skills. I just think Towns is a little bit better. But it’s splitting hairs.”

How would either player complement Julius Randle?

Jackson: “Either guy will complement him in different areas. There’s not a team, regardless of personnel, that doesn’t need a low-post scorer. But as I mentioned, Towns, I think will be able to stretch the floor more. Randle is a little bit like Towns. He’s a better shooter than people give him credit for or that he’s able to showcase in college. But I look at him as somebody who will be able to eventually play in the post, but also stretch the floor for a low-post power forward. That will give the Lakers a huge advantage.

How much have you seen of Mudiay?

Jackson: “I’ve only seen Mudiay with only little tape. I base my opinion on him, I have a close friend who coached in China this year for an opposing team who I trust. He’s an ex-NBA scout and doesn’t work for the NBA. I’m going by his evaluation there. But I’ve seen very little film. Russell, Ive seen tape on and I’ve seen him live. But Mudiay is a superior athlete. He has great speed and great quickness. He has the ability to change speeds like a different guy like a lot of great point guards have. He has very good vision and he’s a little bit of a streaky shooter right now. But I think as a GM, I didn’t worry as much about the shooting part of it as long as mechanically he was somewhat sound. When these guys get in an environment where they’re able to put up the number of shots and get the type of coaching at the NBA level. Most guys improve and improve greatly on their perimeter shooting. He has all the other stuff. He has athleticism and vision and he plays on the other side of the ball. He’s a skill guy and is a good defender, from what I’m told. He has all-star caliber physical attributes.”

What unanswered questions and risk emerged when you are evaluating a player without seeing him live and/or without having access to any of his game film?

Jackson: “The best example I can come up with is Dante Exum of last year [the Utah Jazz selected him fifth overall]. There was some video on him, but the video that you saw he was playing against poorer competition in Australia. The only reference point that people have is really the event in Portland [the Nike Hoops Summit]. People saw him there and what he was expected to do was based on that one event. With Mudiay, you don’t really have that. You have guys and most have been over to China to see him live. But I’m not aware there’s a lot of video floating around.”

What are your impressions of Russell?

Jackson: “I love his vision and his creativity. He’s not a two, but he can play both legitimately. That’s the way I project him down the road. He’s highly competitive and is a guy that is starting to blossom over the past year or year and a half. When he came into the collegiate season, no one really thought he would be a one-and-done guy. So I look at that as a positive because of what he’s going to become. He has excellent speed and excellent quickness. He’s a really creative passer. He has excellent vision and he’s not a great shooter right now. But he will be in time with repetition. I say about this for all four of these guys from what I understand. They’re all quality young men. They all have the intangibles as well.”

Given Jordan Clarkson’s development this season, how much should that go into play when the Lakers determine whether they should address their point guard needs through the draft?

Jackson: “It’s a fair question. But I think when you’re selecting that high in the draft, it’s imperative that you address the players’ value, regardless of position. In the end, it benefits your franchise in the long run. I say that from having made that mistake. But I think you really have to select based on value with now and what you think that player may be down the road in terms of his potential or being able to trade that player or develop that player and whether or not he’s a franchise player.”

So if I understand correctly, you believe the old adage that you select the best player available over trying to prioritize filling a position of need?

What did Clarkson show you his rookie season?

Jackson: “He surprised me, quite frankly. Coming out of college, he was a combo guard that was a stretch of having the prospect of having a chance to ever run a team. But again with all stats, you can’t tell what’s in a players’ head or a players’ heart. That’s one thing you just can’t analyze or quantify. Obviously, he works hard. He’s intelligent. He listens. He takes to coaching. Now you have a player who is a terrific asset to the franchise that could arguably be a starter one day consistently for them. I like him.”

Who’d the fifth player on your board?

Jackson: “That’s a tough one. For me, maybe Justise Winslow. The reason I say that is he’s a supreme athlete and all-star level athletically. He can really play on both sides of the ball. That guy is not going to fail because, at the very minimum, you’re going to be able to defend in the NBA. But offensively, he’s a slasher and has great athleticism. He seems to be a really quality young man. Again, he’s on an improvement curve. He can probably be the fifth pick for me.

How is Winslow better than Arizona’s Stanley Johnson?

Jackson: “To me, he’s a little bit longer. I think he’s a little bit of a better athlete, too. From the perimeter, they both shoot the ball okay. I give a slight edge to Winslow. But as the season wore on, if you take away the first few games from Stanley Johnson shooting from three and took his percentage from there on, he took a pretty high percentage. I also think Winslow is a slightly better athlete.”

If Lakers have a top-five pick, here are the top five players