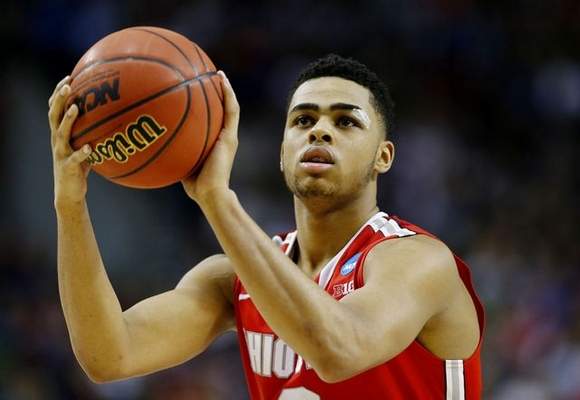 Below is the third part of a occasional series with NBA analysts providing their take on the Lakers’ needs heading into the 2015 NBA Draft on June 25. Below is a recent interview with Ryan Blake, who has been an NBA scouting consultant for over 30 years and is the President of Basketball Operations for Vantage Sports, Inc, a video analytics company.

What are your impressions of Emmanuel Mudiay? (Mudiay played overseas in China after originally committing to Southern Methodist).

Blake: “He’s a combo guard. He can run both spots and attacks the rim. He has a lot of strength and is a crafty ball handler. He’s a good floor man as well. He’s a different type of player. I like his maturity. I think Mudiay is more of a high risk, high reward guy. But I think he’s going to be a good player. Our guys from China really really like him. But he has to prove that he’s going to be a better shooter.”

How much of this is based off of film versus what people tell you?

Blake: “We have film of him with a company that I help run called Vantage Sports. It’s Synergy on steroids. We have a lot of advanced stats that nobody else has that help in terms of success on pick-and-rolls and percentages in that and in rebounding. We have all the video on that stuff. When we get stats and analytics, it’s automatically generated. But you want a full year of that. With those stats, it’s not just, ‘Oh, he has great stats.’ There are things that help confirm the eye test. Is he a good defender? There’s a lot of aspects in defending with closeouts and rotations and recognizing things. When it comes down to it, a lot of defense is based on knowledge and effort. A lot of things he does defensively is really really good. But he does have that handle and he does have that quickness. I think he has a maturity that is high.”

What are the risks still of drafting someone whose games aren’t readily available and without the chance to see him play in person?

Blake: Being high-risk, high reward, sometimes you take a Brandon Jennings who left high school and went overseas to play. Regardless of what happens, when you sign that contract, he’s eligible for the draft the following year. Jennings didn’t play a lot. It’s hard to really really gauge how good a player is regardless. He didn’t play a lot in Italy. But he was a good player and had all this skill. There’s a risk that if you go overseas and you get hurt and you don’t play, you’re still going to the draft. That didn’t happen with him. But he didn’t get a lot of games in. Dante Exum, he’s a high risk. He had a lot of skills. But he spent his time working out. He didn’t spend his time playing and getting experience. What’s so important that we agree on is the learning curve. All of that makes it very difficult to gauge.”


How would you compare Mudiay to Ohio State’s D’Angelo Russell?

Blake: “They’re different players. Mudiay is a combo guard and he attacks the rim more. He’s got great crafty hands and is a good floor man. He doesn’t shoot the ball well. He shoots 33% from behind the arc. But he only shot 21 percent from shots beyond the arc. When he does get behind the line, he’s shooting under 60% in free throws. He’s attacking and scoring. For Russell, game comes so slow to him. He works the pick and roll extremely well. He can shoot from deep and get inside for floaters. The angles on his passing are different. I give Russell the edge. That’s the type of player I want.”

Blake: “I really like Russell. I think he’s going to be a guy that will be a Deron Williams-Jason Kidd type player. He’s not an explosive guy. But what’s in between the ears, I love. He’s so good at running the point and he’s a smooth operator. He makes plays for himself and others. He’s not an elite athlete in terms of speed, but he is in terms of the brain and what’s in between the ears. He can shoot it from mid-range and can get inside that floater. He has crazy angles and I think that’s important for making others better.”

Considering Jordan Clarkson’s development and the various needs the Lakers have, to what degree do you find it less important the Lakers upgrade at point guard compared to the other positions?

Blake: “It’s almost a little bit of a pickle. But knowing Mitch [Kupchak], he’s so smart at figuring that out. He’ll make that decision. It could be best player available. It’s such a deep draft. I can’t speak for Mitch. But you don’t necessarily just build on your draft picks. You can acquire through your needs, whether it’s through acquisitions or trades. For here, you do have a depth of what is going to be an ever changing draft
I don’t have the pleasure and availability of these individual teams get to know within workouts and so forth. A lot of people don’t either.”

Blake: “That’s a great question. Obviously the beauty is in the eye of the beholder. But I do think [Karl] Anthony-Towns will be a guy that will match up well with Julius Randle once he’s healthy. Here’s a guy that can be very versatile and has so much potential as a stretch four. He can really shoot it. I like his maturity. That’s absolutely huge. He can be that guy running in the same realm as Anthony Davis does with his style of play and same body type. He has that upside. He will be able to do so quickly. You have to remember he only played 20 minutes a game.”

How would compare Towns to Duke’s Jahlil Okafor?

Blake: “I’m glad you brought that up. Okafor is absolutely in that mix. Okafor has an arsenal of versatility in his offensive game. That was proven this year where Towns did not to an extent. I love his mid-range and soft touch. He moves in the paint and creates for others. He has great footwork and has that back to the basket and facing game. He’s a good passer from the high to low post. You have to have that size and length. When I mention the versatility, offensively he’s such at a high level right now. He has a great feel for the game and his teammates. That’s essential.

I would love to see him in better condition. That’s what you have to do when you come into this. He also has to become a better defender and rebounder. I think he can be better. That’s not to say he was in horrible condition. But at the NBA level, you have to be. He’s also a poor free throw shooter. But the mix in the top three or four guys, Okafor could go one. Towns could go one. Russell could go one. Mudiay could be the same way.”