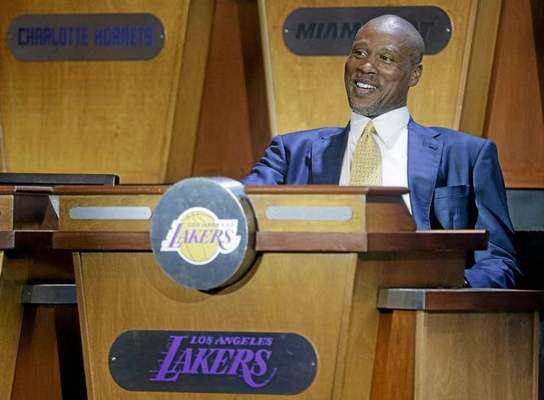 NEW YORK — The people shifted in their seats as each ping pong ball dropped out of the machine. Every number that they heard either increased their excitement or lifted their anxiety. Very few people spoke, at least loudly enough to hear, as they heard the results.

But the uncomfortable silence and the nervous twitches these people showed throughout this process revealed how much remained at stake. Well before the NBA Draft Lottery took place on live television Tuesday night, a handful of team representatives, league officials, media members and an independent accounting firm watched the actual proceedings in a private room here at the New York Hilton Midtown about 90 minutes earlier.

There, all participants faced various restrictions usually considered inconvenient in this modern age.

No one could bring any electronic devices to share the news. Officials forced everyone to put their cell phones in an enclosed envelope to avoid anyone from tweeting, texting or sharing the news publicly or privately. No one could leave the room, either. Therefore, all of the 14 other NBA draft representatives, including Lakers coach Byron Scott, could learn the results nearly 90 minutes later just like everyone else.

The setting already featured enough drama for the Lakers.

They could have faced something just as devastating as their 21-61 record in the 2014-15 campaign in what marked the franchise’s worst record in its 67-year-old history. The Lakers also had a 17.2 percent chance of landing with the sixth or seventh pick, forcing the Lakers to trade it to Philadelphia as part of the Steve Nash deal with the Phoenix Suns in 2012. Instead, something more joyous happened for the Lakers. They landed with the No. 2 pick.

Two men sat side by side that added spice to this development. John Black, the Lakers vice president of public relations, sat on the left side of a table covered in black cloth. Brad Shron, the 76ers’ executive vice president and general counsel, sat on the right. The seating arrangement strictly spoke to the NBA standings, with the Lakers boasting the fourth-worst record and the Sixers finished slightly ahead with the third-worst mark at 18-64. But this coincidence produced a memorable exchange that captured the Lakers’ overall relief.

“Sorry,” Black said to Shron with a grin. “You’re not getting the pick.”

Shortly after Black breathed a sigh of relief over four ping-pong balls bouncing the Lakers’ way, the Sixers received a decent consolation with the third overall pick. Before all that happened, the select members in the room witnessed how the NBA draft order unfolded.

First, 14 ping-pong balls numbered 1 through 14 were placed in a machine manufactured by Smart Play Company, which the NBA said weighed, measured and certified the ping-pong balls before the drawing. In other words, no need to worry about another so-called ‘Deflate Gate’ from emerging.

Kyle Yelencsics, an associate coordinator with the NBA, then clicked a purple stopwatch with his right hand. Then, he raised his left arm to signal for the machine to stop after 20 seconds passed. During this process, Yelencsics faced away from the machine on the other side of the room the entire time. This avoided any scenario where he could somehow influence which numbers were drawn by being able to see the ping pong balls bounce.

Yelencsics, DiSabatino and Vandeweghe then repeated this process for the next three ping-pong balls amid 10 second intervals.

There were 1,001 possible four-ball combinations listed on eight white boards on the left side of the wall. Each team’s combinations depended on how poorly its record became in the 2014-15 season. So with the Minnesota Timberwolves finishing with the league’s worst record at 16-66, they had a 25 percent chance of landing the top overall pick with 250 combinations. With the Oklahoma City Thunder boasting the best record among the lottery participants at 45-37, it only had five combinations to land the No. 1 selection. So it seemed hardly surprising that Minnesota received the top pick after the numbers 1, 3, 7 and 6 were drawn out. The Thunder then ended with the 14th selection.

Meanwhile, the Lakers had 119 possible combinations. That gave the Lakers an 82.8 percent chance of staying within the top five. But they only had a 12.6 percent chance of climbing up to two, odds that were even lower than the 17.2 percent likelihood the Lakers would lose the pick by landing sixth or seventh.

Yet, none of the odds meant anything once Vandeweghe listed the numbers, 6, 8, 4 and 11 as the next number combination. That meant the Lakers would receive the No. 2 pick. Black finally showed relief after having sleepless nights since arriving in New York on Saturday, the anxiety increasing amid constant construction outside of his hotel and activity around the floor’s elevator.

“It’s been on my mind since I’ve been here,” said Black, who wore a purple-striped tie and the Lakers’ 2001 NBA championship ring for good luck . “We talk about the odds, but they mean nothing. It would’ve been very disappointing to go through the season we had and not gotten this.”

The NBA wasn’t done with its work.

Denise Pelli, a partner in the accounting firm of Ernst & Young, then sealed the results in envelopes prior to bringing them to a studio upstairs for the broadcast. NBA Deputy Commissioner Mark Tatum then announced the results on stage, as team representatives anxiously awaited the news.

Meanwhile, all the observers in the private room remained, watching the live broadcast delivering news that they already knew. The relaxed setting juxtaposed the nervous tension they once showed as they learned the results in ascending order.

“It’s way easier on the nerves,” Black said. “If it were the other way around, I’d be a nervous wreck.”

The Lakers have have only participated in the NBA draft lottery four times since its inception in 1985. Every other NBA lottery team this year made at least seven other appearances, while the Clippers have made an NBA-high 22 trips. The Lakers have won 16 NBA championships, which eclipses the 13 combined titles the other 13 lottery teams have.

But Black also served as the Lakers’ team representative in the private screening at last year’s NBA draft lottery in Times Square. Yet, the stakes became much different. The Lakers were assured of receiving a pick that year, which was used to select Julius Randle at seventh overall. This year, the Lakers could have walked away with nothing.

Instead, the Lakers walked away with much more. They received the No. 2 pick. Black grabbed the four-ping pong balls that ensured such a prize. And Black lived up to his promise that he would give Scott a big hug once he saw him again.

All of which provided a happy conclusion to a night that once began with never-ending nerves.

RELATED:
NBA Draft Lottery: Behind the scenes look of how Lakers got No. 2 pick
NBA Draft lottery: Lakers land second overall pick in draft
Kobe Bryant has honest reaction on Twitter to Lakers getting No. 2 pick