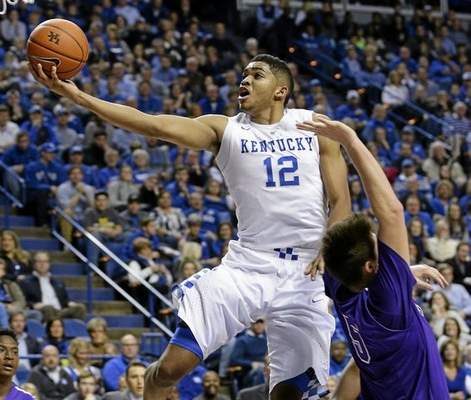 Kentucky’s Karl-Anthony Towns, pictured in a game against Grand Canyon, is the expected No. 1 pick in the NBA Draft. The Lakers could draft No. 1, or slip out of the top 5, depending on Tuesday’s lottery results. (AP Photo/James Crisp)

The persisting question on where the Lakers will land in the NBA draft lottery has soon changed into a different one.

Who will the Lakers draft?

They have plenty of options after grabbing the second pick. But the prevailing sense is that the Lakers would choose between Kentucky’s Karl-Anthony Towns or Duke’s Jahlil Okafor, two valued big men that would significantly bolster the Lakers’ frontline. The early verdict suggests the Lakers would end up with Okafor.

According to sports gambling Web site, Bovada, Anthony-Towns has become the heavy favorites for the Minnesota Timberwolves to select him with the No. 1 pick in the 2015 NBA Draft with 1/2 odds. Meanwhile, Okafor has 7-4 odds to become the No. 1 pick, while other prospects have a combined 5-1 odds to take the top spot.

Lakers coach Byron Scott said on Tuesday in New York that he and the front office have not figured out who would become their No. 2 pick. Scott said he planned to talk with Lakers general manager Mitch Kupchak on Wednesday to discuss things further. But there’s a strong indication the Lakers would prefer either of those big men, and are somewhat relieved that Minnesota could help them out in deciding between the two.

Still, it’s possible the Lakers and Timberwolves look at some other prospects too, depending on how workouts go leading into the June 25 draft. Ohio State guard D’Angelo Russell, Kentucky center Willie Cauley-Stein and Duke forward Justise Winslow represented three of the 18 prospects the Lakers interviewed last week at the pre-draft combine in Chicago. Other options could include China point guard Emmanuel Mudiay, Latvian power forward Kristaps Porzingis or Arizona forward Stanley Johnson.