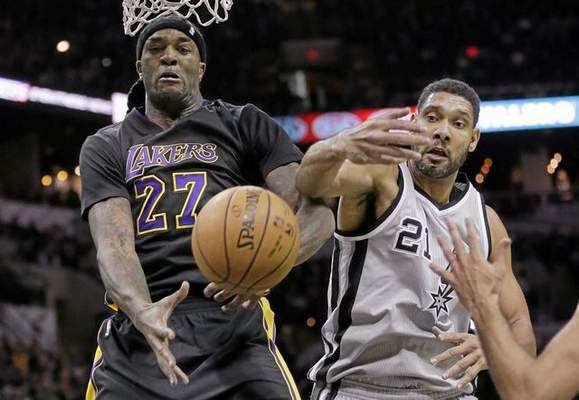 The result brought the Lakers so much joy and elation, the No. 2 draft pick finally bearing some good news for a proud organization that has experienced so little of it in recent seasons.

But Lakers forward Jordan Hill may not feel that way.

The Lakers initially are leaning toward drafting a big man, either Kentucky’s Karl Anthony-Towns or Duke’s Jahlil Okafor. It depends on which player will still remain available since the Lakers believe Minnesota will draft one of those two players. Should the Lakers feel the same way through workouts leading into the June 25 draft, that could mark the end of Hill’s 3 1/2 seasons wearing a purple and gold uniform.

The Lakers will have to decide whether they will exercise the $9 million team option they hold on Hill before June 30. Anthony-Towns and Okafor play the same position as Hill. They are also younger. They will also be cheaper ($5.1 million). So that might mean the Lakers will have to say goodbye to Hill.

Even before the Lakers struck it big at the NBA draft lottery, they had mixed feelings on retaining Hill anyway.

The Lakers already have a bruising power forward in Julius Randle, who is expected to become fully healthy after fracturing his right leg in the team’s season opener. The Lakers are interested in retaining Ed Davis, who will opt out of his $1.2 million player option in hopes of a more lucrative and long-term deal here. The Lakers would have an additional $9 million to spend on marquee free agents, such as Memphis’ Marc Gasol, Portland’s LaMarcus Aldridge or the Clippers’ DeAndre Jordan without Hill in the mix.

The Lakers could still decline Hill’s team option to make him an unrestricted free agent and then renegotiate his deal at a less expensive price. That could come in handy in case the Lakers do not sign any elite post players in free agency.

Hill attributed those unpredictable performances to fatigue after playing the most minutes of his seven-year career. But he also agreed with the criticism leveled from Lakers coach Byron Scott that he needs to improve his training and dietary habits.

But that might not be enough for Hill to keep his spot on the team. Not with a prized No. pick on the way that the Lakers could use on a talented big man to replace him.

RELATED:
Will Lakers end up with Karl Anthony-Towns or Jahlil Okafor?
NBA Draft Lottery: Behind the scenes look of how Lakers got No. 2 pick
NBA Draft lottery: Lakers land second overall pick in draft