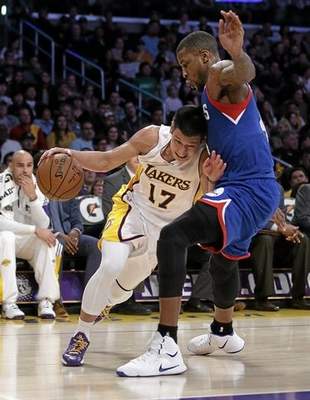 No matter what obstacle he faced, Lakers guard Jeremy Lin vowed he would keep fighting.

He would stay positive amid a fluctuating role as a starter and reserve. He would stay patient amid learning how to play with Kobe Bryant. He would stay amenable to Byron Scott’s honest criticism even if the two shared philosophical differences on offense. He would vow to improve his consistency.

But once the 2014-15 season ended with the Lakers’ worst record in franchise history (21-61), Lin felt like a marathon runner gasping for his last breath as he crossed the finish line.

“I felt pretty burnt out coming out of this past season,” Lin wrote in a recent blog post on his website. “I felt like I gave great effort to play well, play the right way, and maintain the right perspective despite seeing very little fruit. So when the season first ended I felt very…lazy. I know it’s natural to feel worn out after a long year, but I was surprised by how drained I felt and how little excitement I felt to start my off-season training.”

Lin felt so drained that he reported taking 3 1/2 weeks off as soon as the season ended in mid-April. During that time, Lin did not touch a basketball. He did not work out. He did not start weighing his future once he becomes an unrestricted free agent in July.

Instead, Lin relaxed. He healed his sore left knee that kept him sidelined for the last seven games. He traveled down to San Diego with a few friends on a fishing trip. Lin stayed away from basketball so he would fall in love with it again.

And Lin reported he has, starting a new training regimen that he hopes leads him to a better year. Last season, Lin averaged 11.2 points on 42.4 percent shooting, 4.6 assists and 2.2 turnovers through 74 games, numbers that nearly mirrored his career average through five NBA seasons. But that does not equate Lin’s inconsistent play, his varying roles and feeling uncomfortable in Scott’s system.

Lin said at his exit meeting he has not ruled out returning to the Lakers. The Lakers have not, either. But there’s a strong sense that both the Lakers and Lin will only have a partnership if neither party can find a more attractive alternative.

“I get discouraged, I get worn down, I get burnt out,” Lin wrote. “I have doubts, thoughts of giving up, and of not being good enough. But the beautiful part is that God comes through in His unique and perfect way every time!”