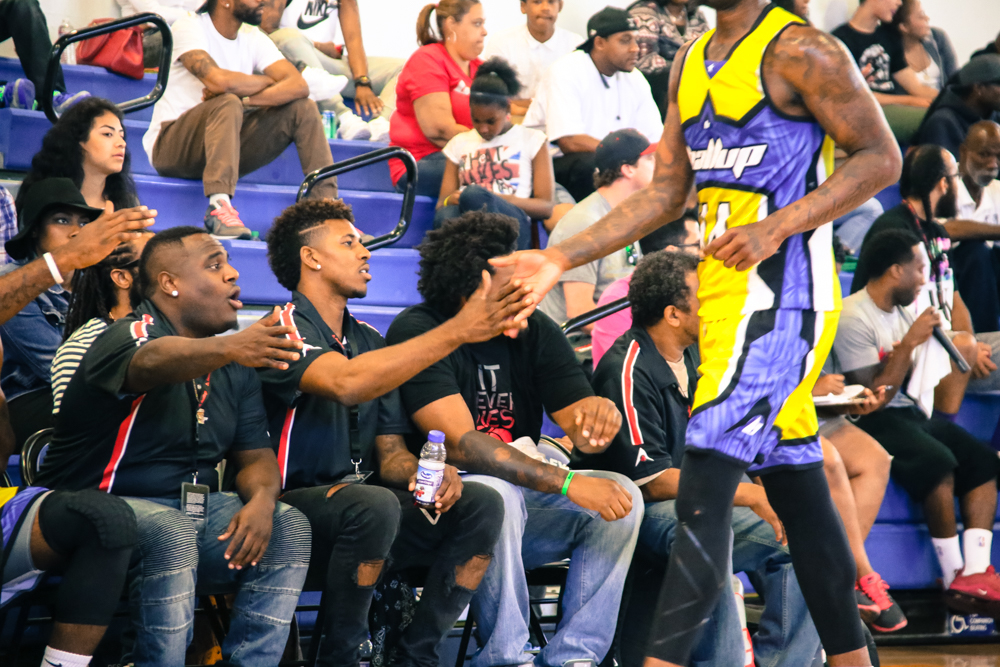 On the basketball court stood Lakers forward Nick Young, his infectious smile and his playful personality emerging again after a dreadful 2014-15 season.

But Young did not step foot on the hardwood to show off his high volume shooting. He did not prove he has followed through on Byron Scott’s constant feedback to diversify his game. Young said he has spent the past month showing those things in private workouts and pickup scrimmages. Yet, this moment marked a different occasion.

Young appeared in Ball Up’s “Million Dollar Summer Challenge” on Sunday at East Valley High School as the owner of the “Swag Champs,” a Los-Angeles based team full of overseas players and high school friends competing in a summer-long tournament in hopes to win $500,000.

“I’m like Mitch Kupchak right now,” Young joked, referring to the Lakers’ general manager. “I’m evaluating players and making trades. This is my team. I got a couple of guys that understand their roles. We maxed a player out. We knew we would need a max player. We’re going to be all right.”

His team lost, 85-66, to the “Kings of L.A,” a team owned by Portland Trail Blazers forward and former Leuzinger standout Dorell Wright. As Young’s team fell behind early, he frequently implored the referees to call more fouls. So did Young’s father, Charles, and his personal assistant, Adrian Pascascio, both of whom served as the team’s co-coaches. The tactic did not work.

“There’s no future for Nick,” Wright joked about Young’s job as an owner. “He’s going to be a model.”

Young will have plenty of more chances to rectify his opening act in this 480-player league. His roster will have more regular-season games through June, including Saturday, 13th, 21st, 27th, 30 as well as July 1 against seven other L.A.-based teams. A series of playoff games will take place on July 10, 11 and 12 against other 10-player teams based in New York, Philadelphia, Washington D.C., Chicago and Indianapolis with eight teams representing each market. The national championship game will then happen in Los Angeles on August 2.

Based on the opening game, that leaves Young with an extensive rebuilding project that only pales compared to the Lakers’ current efforts.

“Dorell is finding all these D-League players and bringing them here. He can’t do that. This isn’t for that type of environment. He’s cheating,” Young said. “I told you I’m Mitch Kupchak now. I’m making some trades. I may have to pay a couple of people off. It’s like Blue Chips.”

Young sounded in good spirits as he talked on the eve of both his 30th birthday and when he successfully proposed to his girlfriend, Iggy Azalea, an Australian hip-hop artist and model. But that marked a stark contrast to what Young experienced in the last year. After re-signing with the Lakers to a four-year deal worth $21.5 million, Young averaged 13.4 points on a career-low 36.6 percent shooting. He missed the first 10 games because of a broken right thumb and the final 27 games because of a fractured left knee. Young became frustrated with Scott over his constant public criticisms surrounding his inconsistent play, playful personality, tardiness and celebration over a rare victory against Boston.

Since then, Young said his “knee is looking good” after beginning offseason training on May 12th. He said he has stayed in shape through strength training and informal pickup games in the Valley. Beyond occasional weight training sessions, Young said he has remained mostly absent from the Lakers’ practice facility “to stay out of the way” during draft workouts, Young sounded more receptive to Scott’s expectations. Young also expressed those sentiments following his exit meeting in mid-April.

“I’m taking his advice,” Young said of Scott, who has instructed him to improve his decision making, playing off-the-ball and off-ball defense. “I’m just working to get better. I’m getting my jump shots tighter and ball handling tighter. I’ve been running off of cones on the floor for a while now.”

All of which Young believes will both improve his game and the Lakers, whom the Young predicted a better finish than last season’s 21-41 season thanks to a healthy Kobe Bryant and Julius Randle, an emerging Jordan Clarkson and the No. 2 pick in the draft.

“Sometimes I have felt like that stuff was rigged, so I was shocked they gave it to us,” said Young, whose comments would surely not sit well in the league office. “People hate on the Lakers. I don’t think they wanted us to have something like that.”

Yet, Young sounded mindful he may not experience that. Since the 2014-15 season ended, the Lakers have become intent on trading Young amid his sluggish season. Yet, that hope may not materialize since the Lakers would unlikely include any assets, including draft picks, just to end the ‘Swaggy P’ era.

Has Young received any clarity?

So for now, Young will train, enjoy life and participate in the Ball-Up “Million Dollar Summer Challenge” that will air on ESPN2 beginning in September. Even if he has playfully suggested he will become a ruthless executive, Young laughed when asked if he would mirror Scott’s demanding personality or Mike D’Antoni’s more laid-back personality if he helped out coaching on the sidelines.

“I’m a players coach,” Young said. “I’m not tough on them right now. I’ll see how they go today when the pressure is on.”

Demetrius Spencer, the CEO and founder of Ball Up’s Million Dollar Summer Challenge, recalled Young showing a different demeanor when he helped coach a New York-based team in the event, “Search for the Next” tour,” which was broadcast on Fox Sports that entailed judging streetball talent.

“Nick gets into it,” Spencer said. “He did not want to lose. He was into the players. There were scenes he would get into it with the refs. He was not a guy just sitting on the bench being quiet and not doing anything at all.”

Young appeared more even keel this time around.

He frequently yelled out to officials, “That is a foul! and to “call it both ways!” Young also argued a traveling call on an opposing player, saying “he walked from the three-point line to the block!.”

But as his team soon fell behind by double digits, Young soon stayed quiet on the sideline while his dad took care of the coaching. He routinely drew up plays, made substitutions and instructed the players both during timeouts and at halftime. Meanwhile, Young stood outside the huddle, frequently offering an encouraging word, joke or smile to a player.

“I’ll get into them and cuss them out,” Young said, laughing. “I’ll get on them. It’s about winning. Plus they’re messing up my money if we don’t win.”

Young will find out eventually if he faces the same fate from the Lakers.