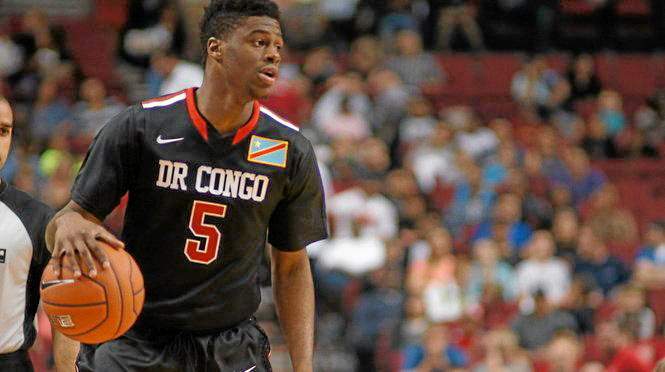 The Lakers have continuously narrowed their search on who they will consider for their No. 2 pick for the NBA Draft on June 25.

That has entailed working to bring back prospects for a second look. The Lakers made progress on that front on Thursday by hosting point guard Emmanuel Mudiay for his second pre-draft workout at the team’s practice facility in El Segundo. The Lakers hope to do the same with Duke center Jahlil Okafor and Ohio State point guard D’Angelo Russell. Mudiay’s individual workout was not open to the media, and the Lakers will follow the same course presuming Okafor and Russell work out again. The Lakers will have open workouts, however, for prospects they will consider with their 27th and 34th picks on Friday.

The Lakers also hosted a private workout on Monday for Kristaps Porzingis and are hoping for a workout for Kentucky center Karl-Anthony Towns. But that might not happen since Minnesota is expected to select Towns with the No. 1 pick.

Mudiay has worked out plenty recently in Los Angeles in which he has offered both glimpses of his athleticism and speed and uncertainty regarding his shooting. Mudiay appeared streaky with his outside shooting both in an individual workout with the Lakers on June 6 and a private workout at an athletic club in Reseda on June 11. But in his private workout open to members of his agency, Rival Sports Group, and a handful of reporters, Mudiay showed more of his speed, dunking and athleticism that has intrigued NBA talent evaluators. Mudiay has also worked out with the New York Knicks, Philadephia 76ers and Minnesota Timberwolves.

Mudiay averaged 17.7 points on 54.5 percent shooting from the field, while averaging 6.0 rebounds and 5.1 assists last year with the Guangdong Southern Tigers of the Chinese Basketball Association. But he shot only 37.4 percent from 3-point range and 57.4 percent from the foul line.

Emmanuel Mudiay believes he could be No. 1 pick in NBA Draft