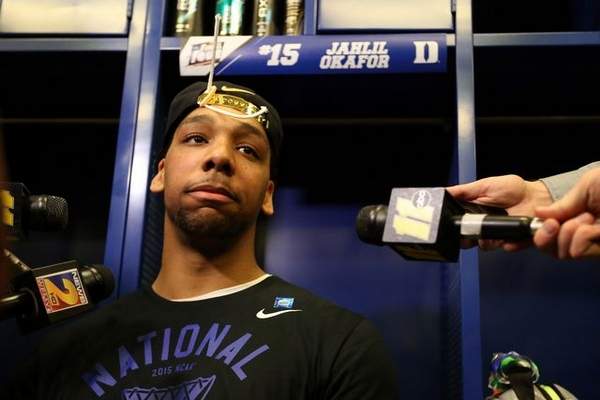 In less than a week, the Lakers will embark on an NBA draft that could significantly influence the pace of their massive rebuilding project. So with six days remaining before that date on June 25, the Lakers have scheduled numerous workouts in hopes for more clarity involving their No. 2, 27 and 34th picks.

The Lakers will host a private workout for Duke center Jahlil Okafor on Friday afternoon at the team’s practice facility in El Segundo, marking the second individual workout Okafor has had wearing a purple and gold practice jersey. The Lakers also plan to host a private workout on Saturday both for Ohio State guard D’Angelo Russell and for prospects that might be available at the No. 27 and 34th draft slots. The Lakers will then have private workouts next Monday and Wednesday just for prospects they would consider with the 27th and 34h picks.

The Lakers also held a second workout on Thursday for point guard Emmanuel Mudiay, though his session entailed training with prospects slated for the second round. On Monday, the Lakers invited Latvian forward Kristaps Porzingis for an individual workout after seeing him train last weekend in Las Vegas.

The Lakers have also become increasingly doubtful they will have a workout for Kentucky center Karl-Anthony Towns. The Lakers believe their lack of progress with those efforts stem from most NBA mock drafts predicting the Minnesota Timberwolves will select with their No. 1 pick. But the Lakers will accommodate their workout schedule should Towns and his representatives express interest in a workout.

NBA Draft: Jahlil Okafor says ‘I can definitely see myself here in L.A.’

Should Lakers go big or small in the NBA Draft?