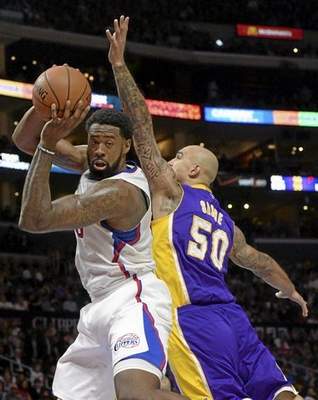 The Lakers had a meeting with Clippers center DeAndre Jordan on Wednesday in Los Angeles. (Photo by John McCoy, Los Angeles Daily News)

The Lakers concluded a long-day that included a cross-country flight and few rejections in the free agency market with a meeting with Clippers center DeAndre Jordan in Los Angeles on Wednesday evening.

The Lakers originally planned to see Jordan around 8 p.m. PST, but they moved up the time to 6 p.m. after team officials arrived in Los Angeles earlier than expected, according to a league source familiar with the situation. The Lakers’ meeting lasted about two hours, which matched the allotted time they spent with Portland center LaMarcus Aldridge Tuesday night in Los Angeles and with Detroit center Greg Monroe on Wednesday afternoon in Washington D.C.

But that length pales to how long Jordan spent with the Dallas Mavericks. He visited with them on Tuesday evening, including Mavericks owner Mark Cuban, as well as a 4 1/2 hour meeting on Wednesday. That visit included what one source in the room described as various breakout sessions, which included Cuban, Mavericks coach Rick Carlisle, president Donnie Nelson, forward Dirk Nowitzki and forward Chandler Parsons. Jordan left the meeting with Dallas impressed with its basketball pitch.

The Lakers’ meeting with Jordan featured coach Byron Scott, general manager Mitch Kupchak, assistant general manager Glenn Carraro, senior vice president of business operations Tim Harris, team spokesman John Black, representatives from Time Warner Cable SportsNet, according to a league source familiar with the meeting. Kobe Bryant, Lakers president Jeanie Buss, executive Jim Buss and James Worthy attended the team’s meeting on Tuesday with Aldridge, but were not part of the team’s presentation for Monroe and Jordan. It is not currently clear what Jordan took away from the Lakers’ meeting.

Jordan still plans to meet with the New York Knicks on Thursday morning and with the Clippers on Thursday evening. Clippers coach Doc Rivers and owner Steve Ballmer are expected at the meeting, though it is unclear if teammates Chris Paul and Blake Griffin will be there. Jordan can re-sign with the Clippers at a five-year deal worth $108 million as opposed to a four-year deal worth $80 million somewhere else.

NBA free agency: Will the Lakers hit a home run with LaMarcus Aldridge or DeAndre Jordan?