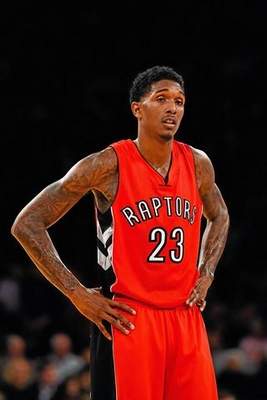 Lou Williams, who was the NBA’s Siixth Man of the Year with the Toronto Raptors last season, has agreed to a three-year, $21 million contract with the Lakers. (Photo by Alex Goodlett/Getty Images)

Father Time delivered three devastating punches that took Kobe Bryant away from the court for three consecutive years. That made the Lakers determined to find some antibiotics to ensure their star patient can delay the inevitable against an undefeated opponent.

Bryant would have surgery on his injured right shoulder and go through a nine-month recovery process aimed at fully healing his battered body. The Lakers would upgrade their roster so neither coach Byron Scott nor Bryant would feel he has to carry a burden that would become too heavy to lift. The Lakers would then become even more conservative with Bryant’s playing time, practice regiment and off-day routines.

The Lakers did not accumulate the talent they wanted, striking out on free agent bigfish named LaMarcus Aldridge, Greg Monroe and DeAndre Jordan. But the Lakers collected a decent consolation prize in Lou Williams, the NBA’s Sixth Man of the Year who could ease Bryant’s workload because they both share the same position and love for scoring.

“When he goes out, I’m sure I’ll be coming in,” Williams said of Bryant in a phone interview on Monday with Los Angeles News Group. “That’s how it will work. We won’t have too many lapses. We’ll be able to keep the scoring level going and give him an opportunity to get a breather and then he’ll come back in.”

Scott has said he would like to play Bryant in the mid 20-minute range and possibly rest him on back-to-back games, a contrast to when he averaged 22.3 points on a career-low 37.3 percent shooting in 36.4 minutes. Despite pledging last season to minimize Bryant’s workload, Scott played him between 30 and 40 minutes through 27 games and even exceeded that 40-minute threshold three times.

Part of that stemmed from Scott’s self admission that he overestimated how Bryant could play after overlapping injuries to his left Achilles tendon and left knee sidelined him in the 2013-14 season for all but six games. But it also spoke to the Lakers’ inconsistent supporting cast.

But Williams characterized himself as a player that can both ease Bryant’s workload and handle his demanding personality. Williams also added Bryant’s presence partly influenced him choosing the Lakers over Toronto.

“It’s well documented how competitive Kobe is and how tough Byron can be on his players sometimes,” said Williams, whose three-year, $21 million contract with the Lakers does not include any player or team options. “That comes from guys wanting to win games and wanting to win at a high level. That’s something I wanted to do as well. I think it can elevate me.”

The Lakers had hoped Nick Young could fill that specific job description when they awarded his career season in 2013-14 with a four-year, $21.5 million contract. But nothing went according to plan. He missed the first 10 games because of a surgically repaired thumb, leaving Bryant with a greater burden. Young averaged 13.4 points on a career-low 36.6-percent shooting, numbers that mirrored his production even before Bryant suffered a season-ending injury to his right shoulder in late January. Through it all, Scott became increasingly irritated with Young’s inconsistency, attitude and work ethic.

Hence, the Lakers have become intent on trading Young. But as of now, Young remains on the Lakers’ roster, raising questions on how Bryant, Young and Williams will co-exist as scorers.

“We’ll have to build the chemistry,” Williams said. “Kobe Bryant is a walking stat himself. He doesn’t have to explain what he brings to the table. Both Nick and myself have been successful scoring guards over the years. I’m sure we’ll work it all out and everybody will get their opportunities. We’ll do everything that works for the team.”

And Williams argued that will involve more than just him making baskets.

“I have a reputation as a scorer and a guy who just comes in and scores. I like to praise myself on being a competitor and one of the guys that loves to compete,” Williams said. “It’s not about me scoring the ball. I’ve always said to my teammates that ‘two points is two points, whether it’s yours or mine.’ Even though I’ve been tagged as a scorer and a guy who shoots a lot, I’m a guy that makes the best plays that I possibly can.”

Williams has done that mostly as a reserve. He spent six of his seven years with the Philadephia 76ers (2005-12) coming off the bench after he was selected as the 45th overall pick. Beyond starting nearly half of his games played in 2009-10 in Philadelphia or a handful of games in Atlanta (2012-14), Williams mostly kept the same title. He excelled well enough last season to win the NBA’s sixth man of the year award by averaging a career-high 15.5 points on 40.4 percent shooting.

Williams maintained, “I would love to start if a coach considered me as a starter,” before explaining he has embraced a bench role to maximize his value to a team. Williams also sounded open toward defending his award assuming Scott views him otherwise.

“I’d like to get to L.A. and see how they would like to play me and what goals they have for me and then go from there,” said Williams, who plans to arrive in Los Angeles either Wednesday or Thursday before training the rest of the offseason near his Atlanta residence. “But with basketball, if I’m going to be a sixth man, then absolutely. I would love to defend my title.”

Doing so could depend on whether William plays well enough to leave the Lakers comfortable resting Bryant.

“I love to be in the game in the fourth quarter when it matters,” Williams said. “I feel like based on how Kobe’s identity and the way Coach Scott and how he is, I feel like I can fit that mold.”